This cigar from L’Atelier Imports is collaboration between Pete Johnson, his brother K.C., Sean Casper Johnson, and Dan Welsh of New Havana Cigars. The sizes are an homage to Cuban Cohiba Behikes. The cigar is made by Pepin Garcia in the My Father factory in Nicaragua.  The filler blend is of Nicaraguan tobaccos while the wrapper is an Ecuadorian wrapper called “Sancti Spiritus”. This is a hybrid of  Criollo and Pelo de Oro. I’ve enjoyed Behikes in every size even the 56 which is not normally my preference so let’s see what this Cuban tribute has to offer:

The cigar sports a high glossy band which immediately attracts the eye. The wrapper has a rich brown hue with an oiliness and veins present. There were no soft spots on this cigar and it was rolled extremely well.  The triple cap along with the pigtail at the end demonstrates the craftsmenship taken in rolling this smoke.

Intial lighting of this cigar gave off tea and sweet fruit notes. Bits of spice where had on the retrohale however the lingering finish was that of sweetness.  The body built up to a medium profile at this point and coated the palate with creamy smoke. I initially thought I would get a classic blast of “Pepin spice” however I was pleasantly surprised with the refinement I was treated to. Midway the LAT 54 developed a creaminess and wood profile that finished with that fruit sweetness again.  The wood/cedar profile picked up with spice developing in the background. The last third of this cigar gave a more earthy character and chewy texture to it.  I was loving the changes in flavor and the tobacco quality was excellent. The finish provided flavors of oolong tea, earth, and cedar. The cigar burned a nice dark gray ash throughout and smoked effortlessly. 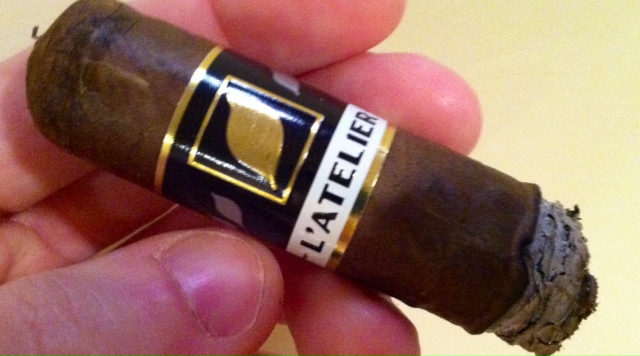 Having smoked the entire line of LAT’s I have to say this is my favorite vitola. The flavors presented were refined and harmonious throughout the entire cigar. The LAT 54 smokes medium to full bodied and packs wonderful sweet, wood and earthy flavors. The progression of this cigar left me wanting more and I would love to see where the flavors go with some age. Although a lot of Pepin’s cigars smoke well initially and then tend to fade in flavor, I think this one has potential to develop further if not remain just as good in the future. L’Atelier has shown me something with this Behike tribute. I wouldn’t say it is anything like a Behike nor was it the intention of the maker however for the price and flavors you need to pick a box of these up.

Christian offers a perspective of cigars ranging from vintage pre-embargo smokes, hard to find cigars as well as current releases. His 22+ years of smoking and love of travel have taken him on cigar journeys here and abroad. From smoking HERF’s in friends backyards to smoking Montecristo No. 2s on the terrace of the Hungarian Palace Hotel in Lido Italy, Christian takes the “everyman” approach to cigar smoking being it all about taste and enjoyment of where you are or who you are with.
« Rocky Patel Announces New Blend: II-XXVI (2/26)» New “Kentucky Fire Cured” Line from Drew Estate