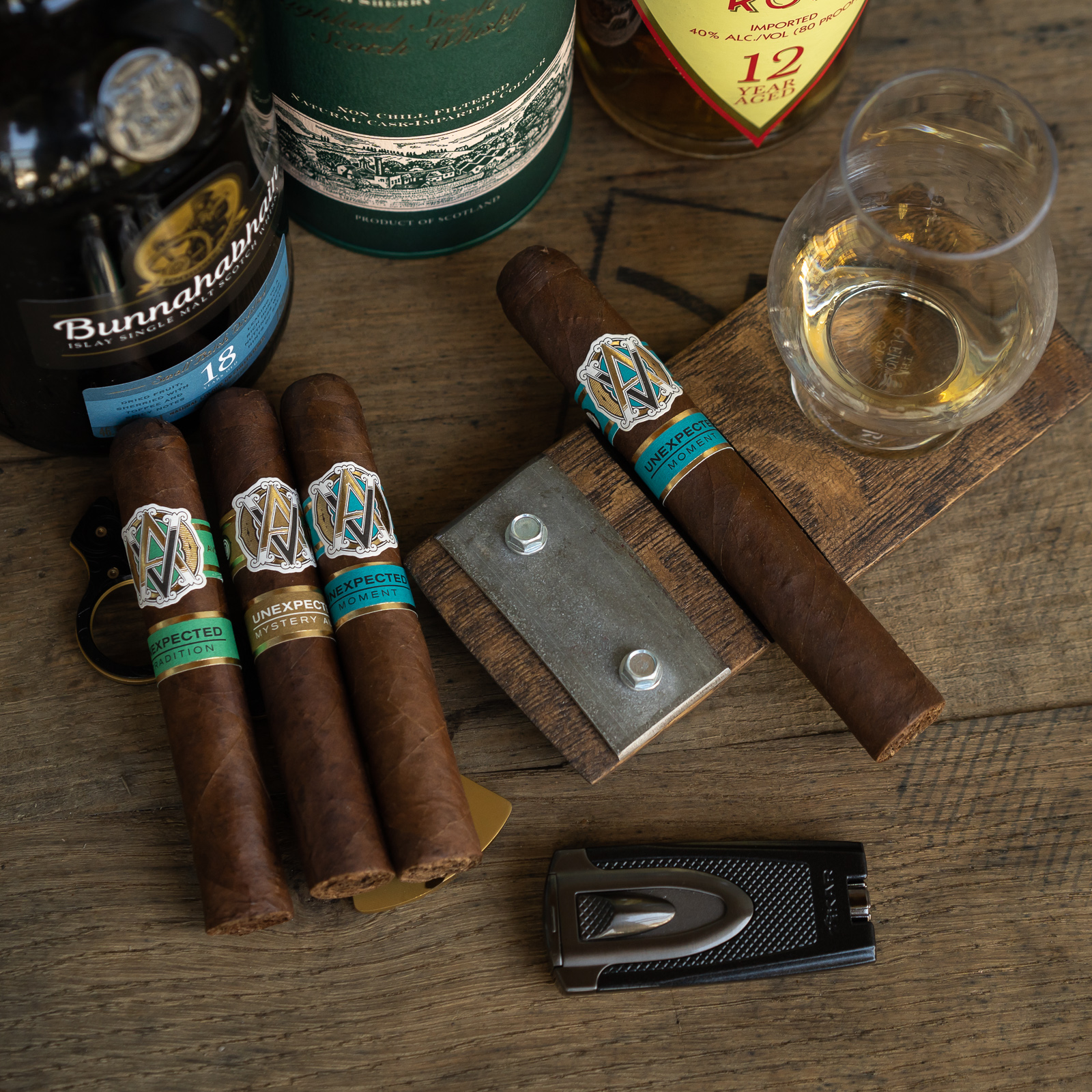 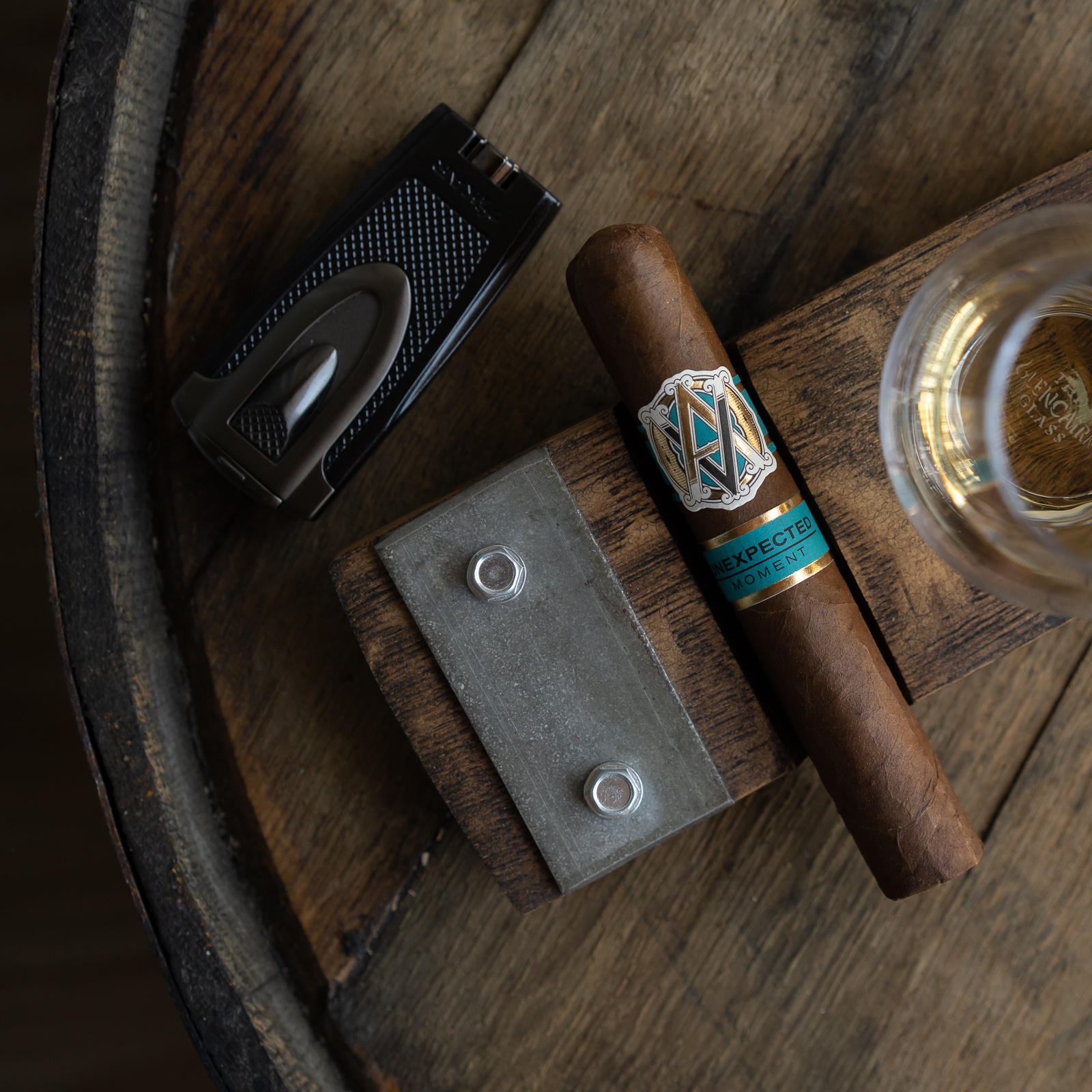 The outer Ecuadorian wrapper on the AVO Unexpected Moment is a rich, dark brown with a few major veins and a velvety feel in the hand. It’s a stout cigar, packed full and with just a little bit of springiness when squeezed.

The aromas off of the foot of the AVO Unexpected Moment are complex, soft and seem to betray that at least some of the tobacco in the cigar as extra aged. Aromas include dusty cedar, mulch, sweet grass, some spiciness that tickles the nose and some light cocoa. The draw is a bit restrictive, about an 8/10 in terms of amount of restrictiveness, and the pre light draw features spice that tingles my lips and some granola and maltiness. Let’s light up.

Leather is the big flavor coming out of the gate for the Unexpected Moment, followed by deep espresso, dusty wood, and traces of cream. It’s very much an AVO profile, but I’ve got to say it’s almost all bitter on the flavor spectrum, so I’m hoping for a bit of balance soon. The retrohale is similarly bitter, with bitter oak and white pepper as the main ingredients.  Strength wise, it’s a solid medium. Smoke production is decent, but the tight draw is definitely bringing it down a bit. 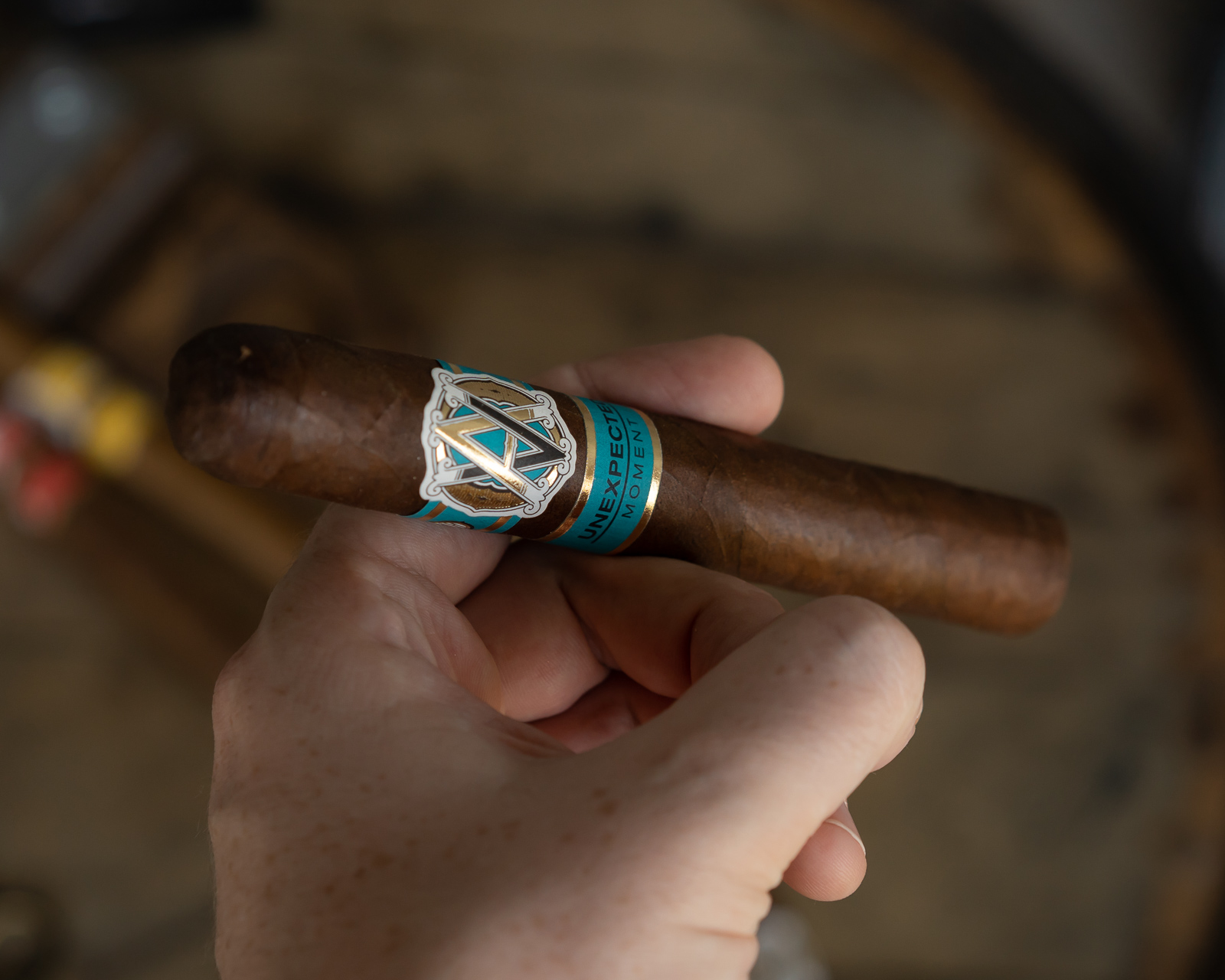 It takes about an inch of the cigar for new flavors to develop, specifically a brownie note that hits the palate and the aroma. It’s quite nice, but doesn’t fully offset the overall bitterness of the flavor profile. The ash that’s developed is solid white and the burn is almost completely straight, which is great. As the cigar progresses closer to the second third, some mushroom and vegetal notes develop, adding some nice complexity. Still, a mostly one sided smoke so far.

At the halfway mark, the AVO Unexpected Moment finally begins to show some balance, with the cream note turning a bit sweeter and the wood note losing some of its bitterness. The cocoa note which was very much in the background of the aroma also builds, augmenting the smoke even more. The retrohale is mostly gentle woodiness, with some black pepper matching it in strength. Construction problems are nonexistent, and the smoke production which was a bit low in the first half of the cigar starts inching up.

The final third of the AVO Unexpected Moment is for the most part more of the same. The strength and body do start to inch up, making it to well past medium. Black pepper makes a big entrance on the palate, giving the cigar a bit of complexity but mostly dominating the other notes on the palate.

I only smoked one AVO Unexpected Moment for this review, so I’m open to the possibility that the issues with overly dominant bitterness are not representative of this blend as a whole. That said, I don’t plan on smoking more of this blend given that AVO has so many other great blends like the recently reviewed AVO Unexpected Tradition.

If you’re a fan of bitter cigars, or like pairing cigars with sweeter drinks like rum or sherry-finished scotches, this could be a winner. On its own, it has some nice flavors but overall falls short.

Brand evangelist, digital marketer, cigar and spirits expert specializing in consumer tasting and educational events. Matthias made the long trek from his hometown of Portland, Oregon to New York City in 2007, and in nine years has hosted more than 120 events and helped promote and launch dozens of cigar and whiskey brands in the U.S. In 2016, he joined the Cigar Journal Tasting Panel, blind-reviewing pre and new release cigars.
« AVO Regional East Edition Review» Zino Platinum Master Edition Throwback 2008 Review