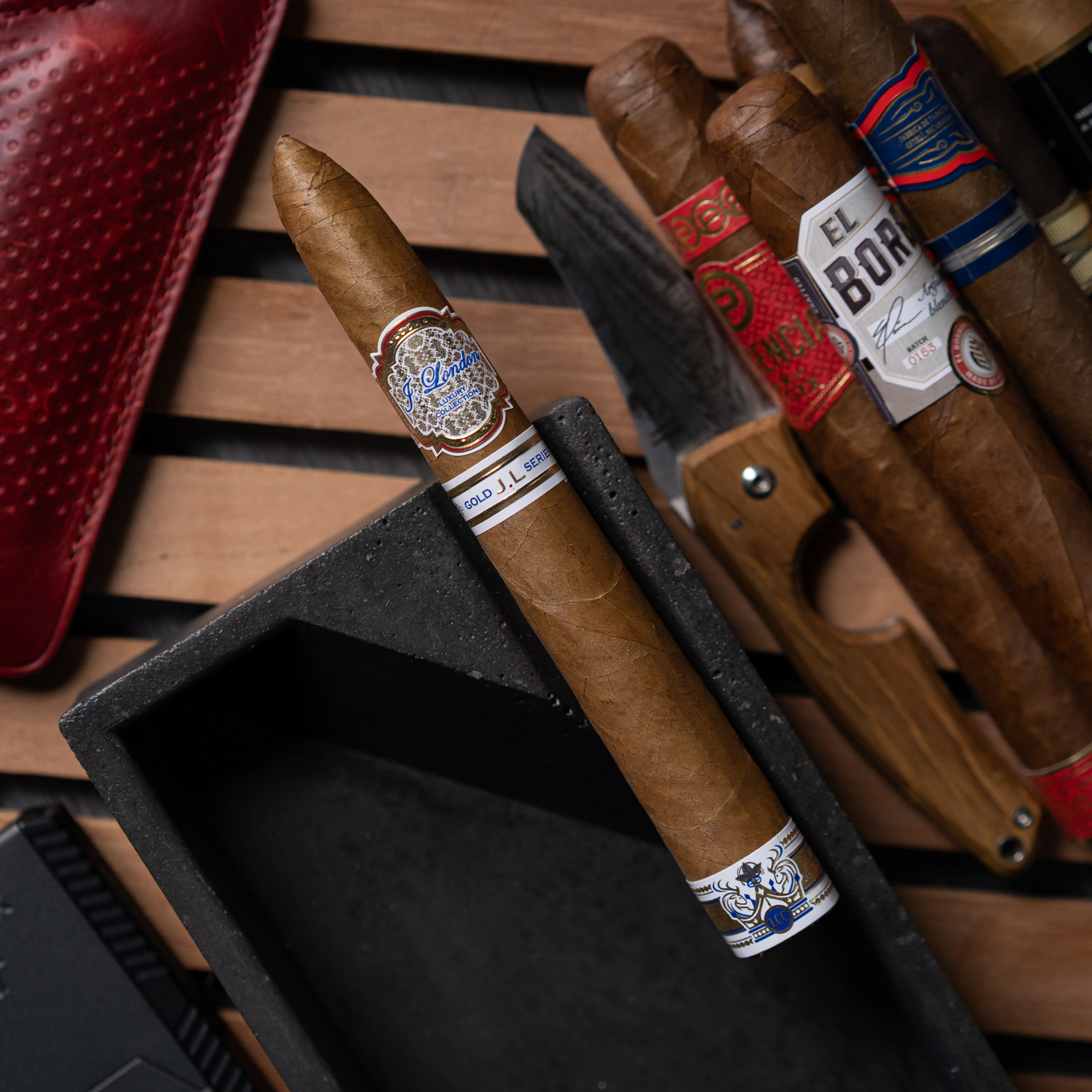 Jonathan Fiat owner of J London cigars has released small batch and exclusive cigars since coming on the scene in 2014. I have smoked a few cigars from his lines and enjoyed each one. This recent addition is an exclusive size for the Luxury Cigar Club company in a Pyramides vitola. All of J London cigars we have reviewed (Queens Guard, Box Pressed Churchill) have been well crafted and the construction top notch. 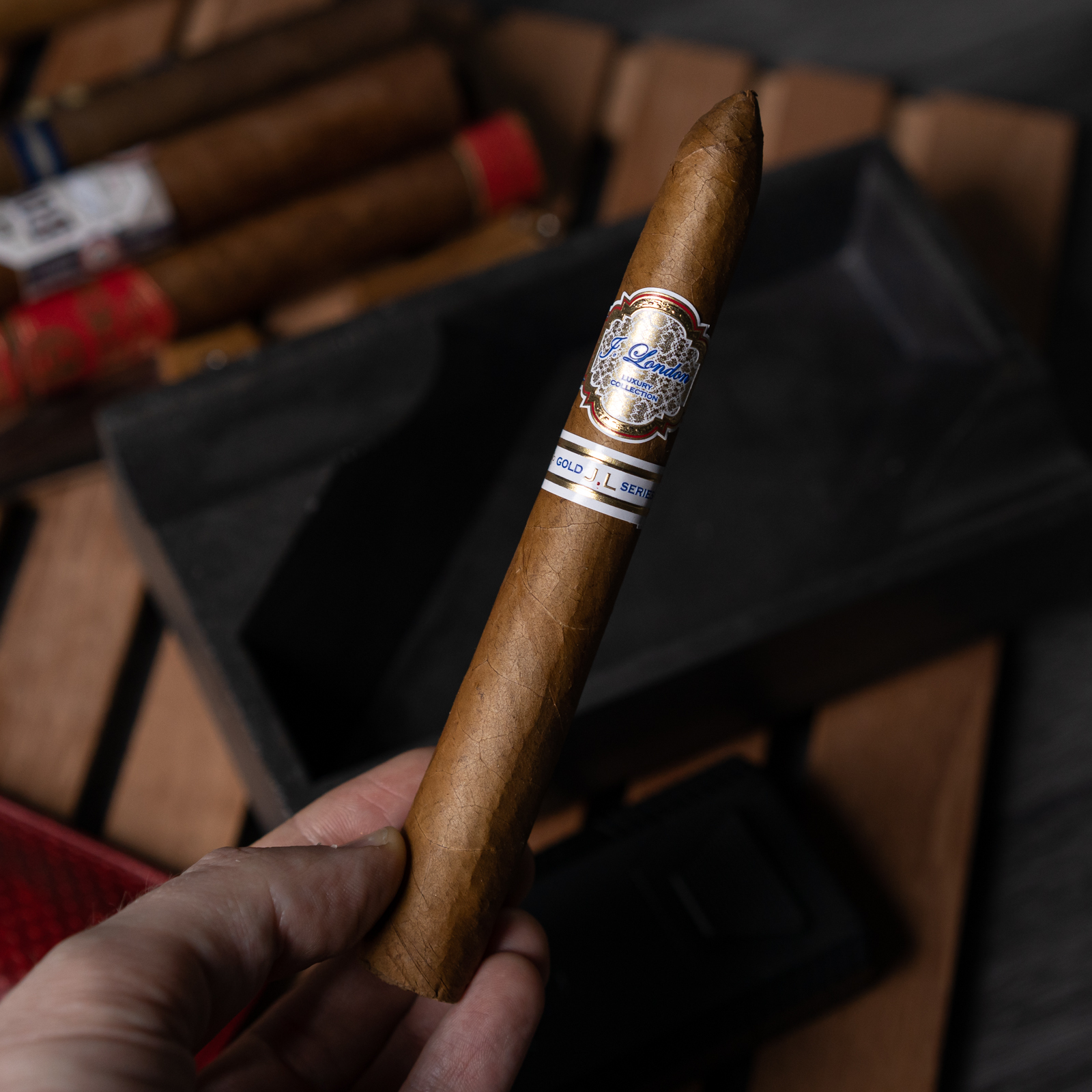 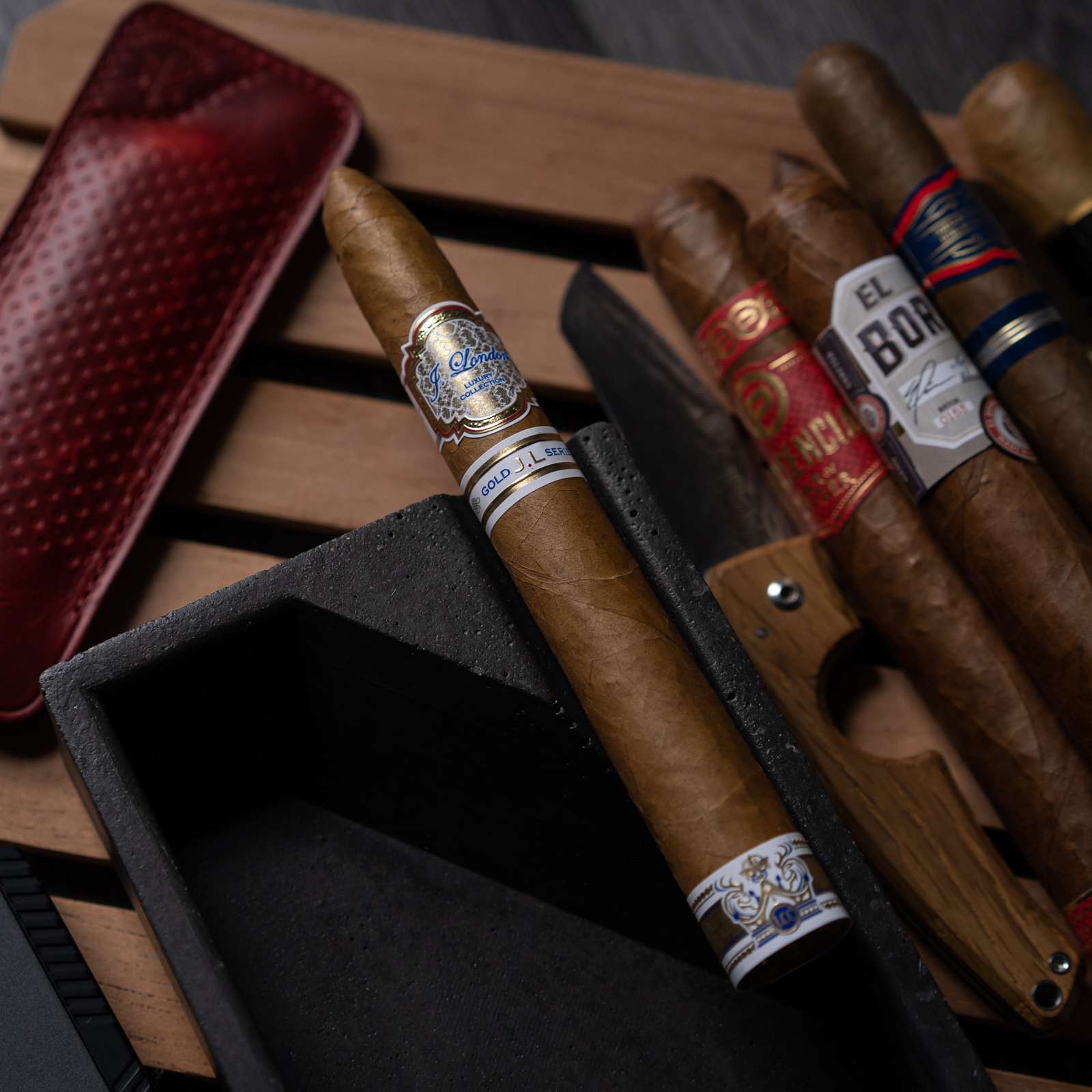 The wrapper on this figuardo is a light Connecticut shade and is seamless. The head is distinctly pointy, and the cigar is firm all the way down the line. Rolling it in hand the craftsmanship is  letting you know this is a well-constructed stick. The foot smells of barnyard and oats with a woody undertone.

I take a straight clip with my Xikar cutter, and the dry draw is slightly firm with wood and tangy notes on the tongue. Using my Lamborghini lighter I toast the cigar and the first puff fills my mouth with earth and oak that lingers for a bit. The draw loosens up and there’s notes of biscuit, toast with a creamy long finish. Taking a retrohale white pepper and toast permeate through my nostrils with a touch of that creaminess on the exhale.  Thus far this smoke falls in the medium range with a noticeable white ash and clean burn line.

As I reach the second half the burn continues to be perfect, and I pick up sweet maple and earth that finishes just the same. Slowly drawing I’m getting cedar with café au lait on the back end which is rather pronounced. On the retrohale there’s cinnamon spice along with oak that is a bit overwhelming in the sinus. The smoke production is increasing, and the cream and sweetness is intensifying. The cigar continues in the medium bodied profile. Cedar mixes with the sweetness on my palate with another lengthy finish.

There’s a change in the profile as the last third gives a saltiness followed by barnyard and damp notes. As I puff away the salinity is still present along with marzipan and toast. Some minerality is detected on the draw along with dried fruits and nuts. As I retrohale citrus and cedar zing all the way from my nose to my throat. The body picks up a bit on the medium to full side where the earthiness returns although with a much shorter finish than the rest of the cigar. Some hay and cedar begin to development with another less elongated ending. I take a final draw and there is a sweet and salty combination that resonates to finish off the smoke.

This cigar offered a solid medium bodied experience throughout with some tasty notes of earth, maple, spice, and an underlying sweetness. The quality was top notch in terms of construction and burn. Save for the last third of the cigar the finish was long and savory. Seeing it is a J London cigar, I am not surprised. The complex flavor really demonstrates what a Connecticut wrapper can deliver with a choice blend.

I would recommend picking up a few or a box as this cigar would work well midday or night.

Christian offers a perspective of cigars ranging from vintage pre-embargo smokes, hard to find cigars as well as current releases. His 22+ years of smoking and love of travel have taken him on cigar journeys here and abroad. From smoking HERF’s in friends backyards to smoking Montecristo No. 2s on the terrace of the Hungarian Palace Hotel in Lido Italy, Christian takes the “everyman” approach to cigar smoking being it all about taste and enjoyment of where you are or who you are with.
« Blind Review: Crux Limitada Redline (2019)» Blind Review: Plasencia Alma Fuerte Sixto Colorado Claro