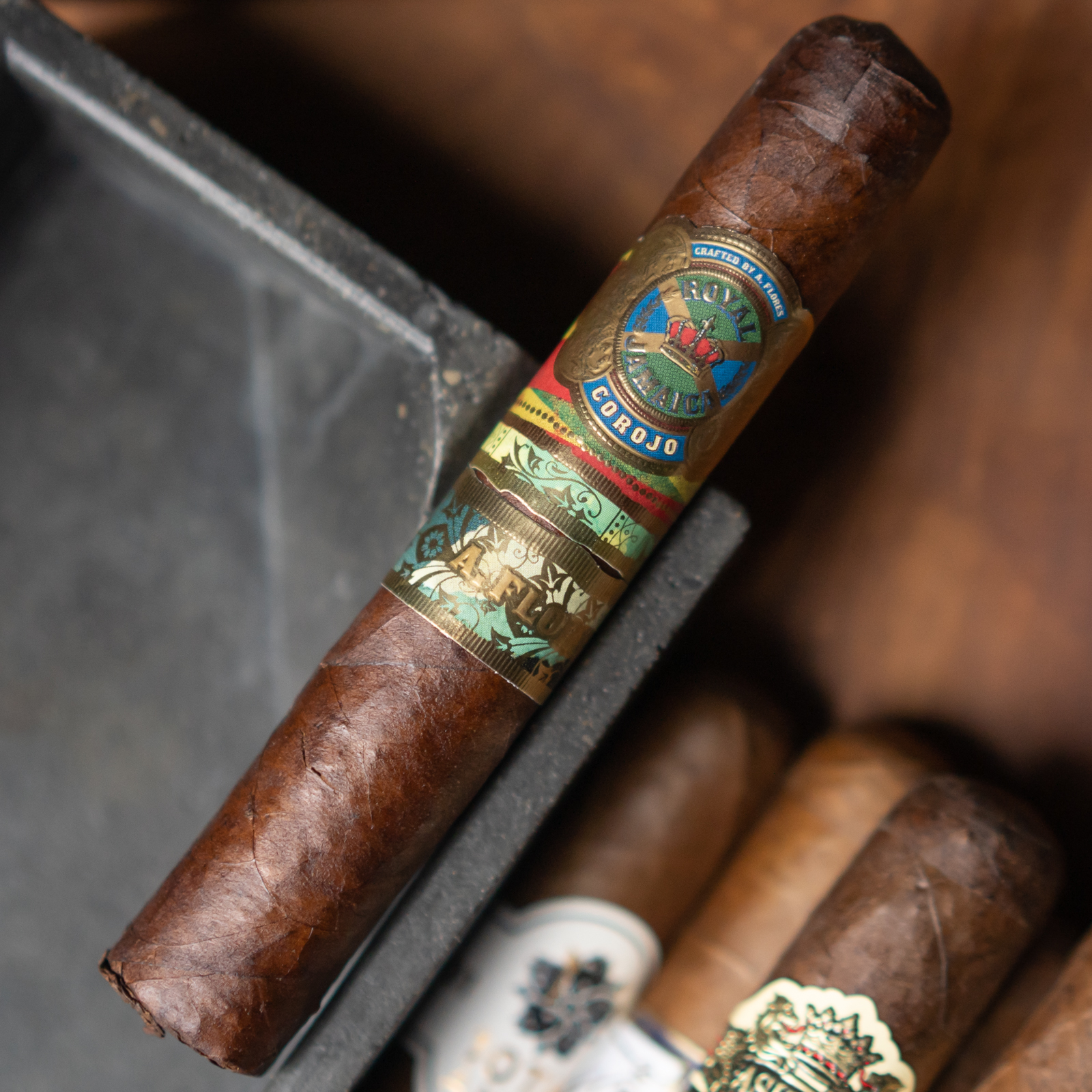 Royal Jamaica Corojo is a Casa De Montecristo exclusive release blended by the industry-renowned Abe Flores at his PDR Cigars factory in Santiago, Dominican Republic. Started in 1935 by James Frederick Gore out of Kingston, Jamaica and in strong demand until Hurricane Gilbert ravaged its supply-chain in 1988, the Royal Jamaica was an iconic post-Cuban embargo brand. However, unlike the original blend, there is no Jamaican tobacco present in this current release. Under the direct ownership of Altadis, USA  or a franchisee, there are currently 29 Casa De Montecristo locations nationwide through which you can purchase this cigar. 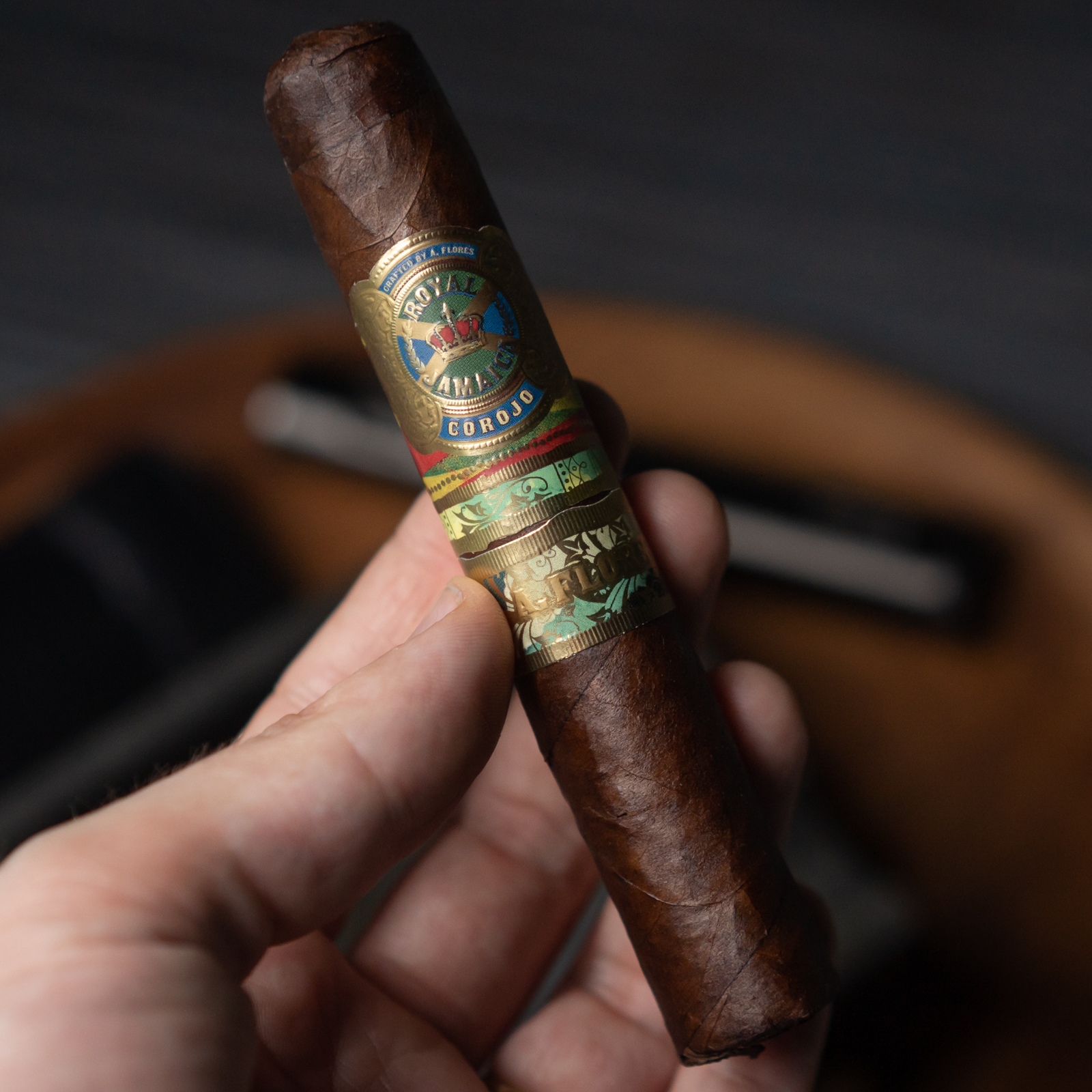 Did I ever mention how much I love my new reviewing job?!  Its like being part of the Power Rangers, and nothing like being part of the Power Rangers in the least bit.  I’m a hopeless romantic, and things tend to go to straight to my head most of the time. Take for example, this gorgeous “Colorado Claro,” AKA “Rosado,” AKA “drool-worthy” wrapped robusto cigar I just received.  Its classically triple-capped with even one of those fancy wrapped footies.  That means I get to taste this majestic ruby-brown sugar specimen before the binder and filler kick in. What a treat! There is a slight prensando (cuban press) to the vitola which I am also very bias towards.  I feel it makes the cigar a more comfortable experience.

The cigar itself smells like straw bales.  I throw a cross-cut on this puppy and take a sip.  The cold draw is not tight, nor is it loose.  Very reminiscent of baking spices like nutmeg. I flicker up the closed foot and take another drink.  It tastes like habano. Hmmmm.  I toast the rest of the foot and the cigar combusts fine.

The first third is savory.  Lots of salt and mesquite.  The smoking experience is what I like to call, “a double-puffer.” The cigar needs to be stoked constantly to not only keep the mojo alive but in fear that it might go out. I’m smoking in an ideal temperature and even left the cigar out to acclimate, so I suspect this might just have to do with the blend. Once I can get the cigar to heat up enough for me to retrohale, I can  make out hazelnuts, gun flint, and black pepper. However every flavor note is as bland as a pancake butt.

The second third is still struggling with a handicapped draw issue. There are no stems, tunneling, or even bunching issues I can see or feel for.  Again, this comes down to blending.  Smoke and heat production are M.I.A., but I don’t have to relight it, surprisingly. If a ghost were a cigar this would be it. Better yet, I want you to think of the most passive aggressive person you’ve ever come across. Come on! We all know at least one person like this!  Can you think of that one person?  Got them in mind yet?  Good!  If that person transformed into a cigar, this would be them.  All bark, no bite!

The last remains of the second third are an apparition of chocolate and wood.  However, my tongue may just be seeing things.  The only thing non-holographic that happens to the cigar at this phase is the heat production picks up drastically.  Now the cigar is too hot! As if all the tobacco oils weren’t spread evenly throughout the vitola.  Were these cigars aged upside down?!

The last third is even more specter-like then it was in the beginning and middle portions.  An unearthed lactating mummy has more flavor then this blend of foliage.  To save face, because I’m a good guy at heart, I will compliment the cigar for leaving a very pleasant aroma in the air from the lit end.  And for you competitive “my-ash-is-bigger-then-your-ash” influencers out there, the sturdy ash on this cigar is I.G.-worthy, indeed.  Get your phones ready if your thinking of smoking this stick.

Faint flavors of salt and mesquite continue towards the finish line, but really I’m reaching for straws here people. The retrohale is nothing but hot-air.  When I’m finished with the cigar it I feel like I just left my in-laws house.  Those that understand, know the feeling.  Throw me a wink, a nod, and maybe some baseball dug-out sign language when you see me if you can relate.

The perpetrator in question happens to be a Royal Jamaican Corojo Robusto.  This is my lowest scoring cigar to date.  If you know me, you know I punish my taste-buds on a constant basis.  Between smoking cigars and wine drinking, I can really tire my palate out. So, for reviews I make the effort to fast from strong flavors and scents.  I didn’t drink or smoke anything for the 24 hours leading up to the review. That being said, it doesn’t mean my tongue doesn’t know exactly what it likes.  Its as calloused as a T-rex foot, but as sensitive as todays generation.  And for those that suspect I rushed the smoke, it took me about 90s minutes to review this stick. I spend the same amount of time on the regular to smoke through a Padron 2000 which is similar in size. I also smoke Nicaraguan and Honduran corojo on the regular, so I have my expectations. The only similar cigar to this that used Ecuadorian Corojo to some substantial success was LFD’s “Andalusian Bull”  Sorry Abe, Lito Gomez has you beat when it comes to meshing Dominican tobacco with a “chance-of-clouds” corojo.  This cigar was in much need of some cojones, even for a newbie smoker to enjoy it in my opinion.

For 20+ years, Michael has been a cigar smoker and wine drinker, and takes a lot of pride in the palate he has acquired. He feels that drinking and smoking are the two best vices a man could ever have. Michael currently passes the time as an assistant wine and cider maker for two of the biggest names in the New York natural wine scene, as well as working a few shifts at an established Westchester cigar lounge. He can most likely be found sipping on something bubbly and firing up a Nicaraguan puro after a hard days work...and sometimes on-the-job, if no one is looking. As an avid reader and writer, Michael is very appreciative of the team at Fine Tobacco NYC for the opportunity to join the blind review panel.
« Blind Review: Cohiba Nicaragua N54» Blind Review: Oliva Serie O Corona