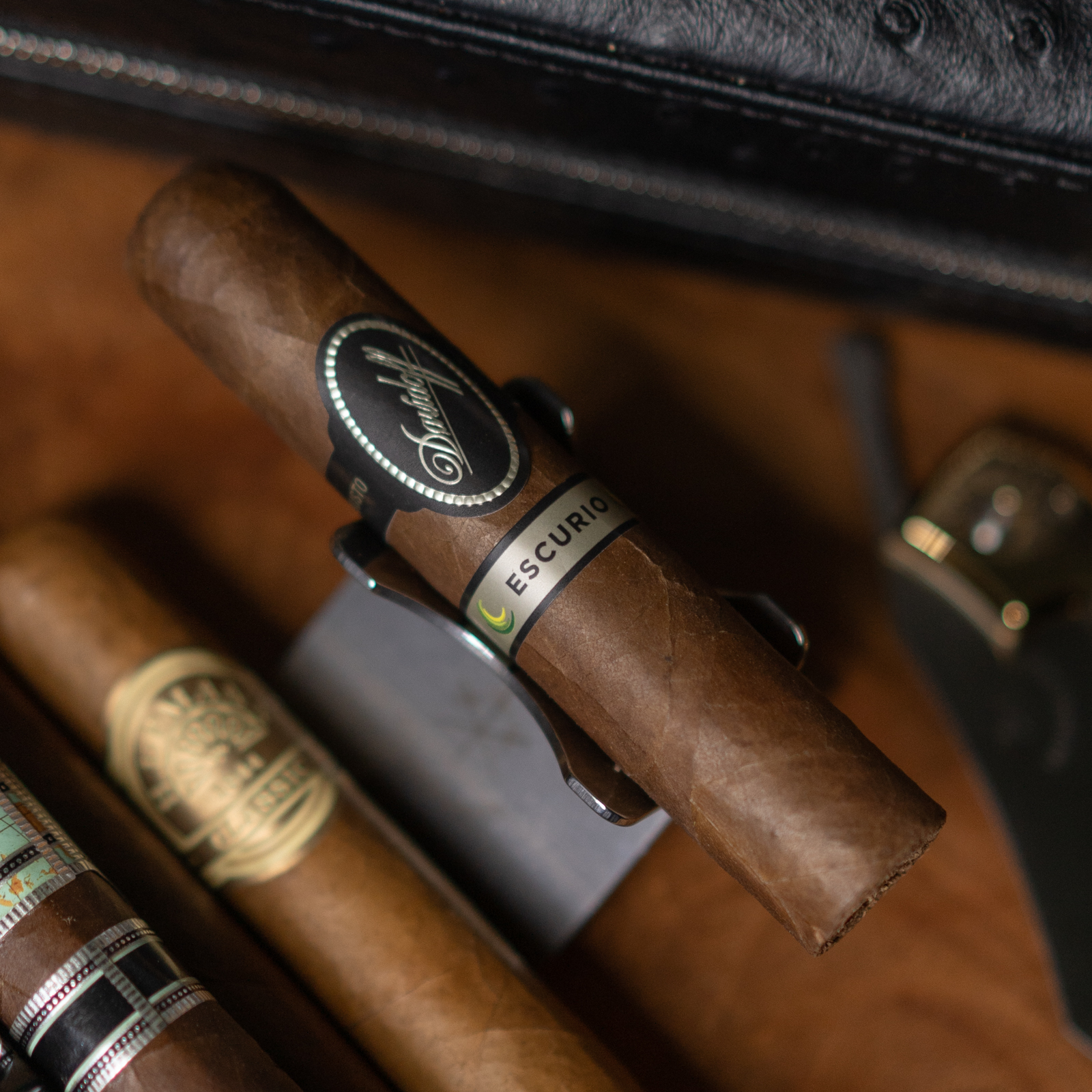 The Davidoff Escurio Robusto is a made by Davidoff Cigars who is owned by Oettinger Davidoff AG, based in Basel, Switzerland. The brand is named after the “King of Cigars,” Zino Davidoff who owned and operated a tobacco specialist shop in Geneva, Switzerland from 1926 to 1994. Released in 2015, the Davidoff Escurio line features Brazilian tobacco hailing from the wet climates of the Bay of Todos os Santos. Presented in a beautifully aged Ecaudorian Habanao wrapper, this cigar blend is offered in 5 different vitolas. 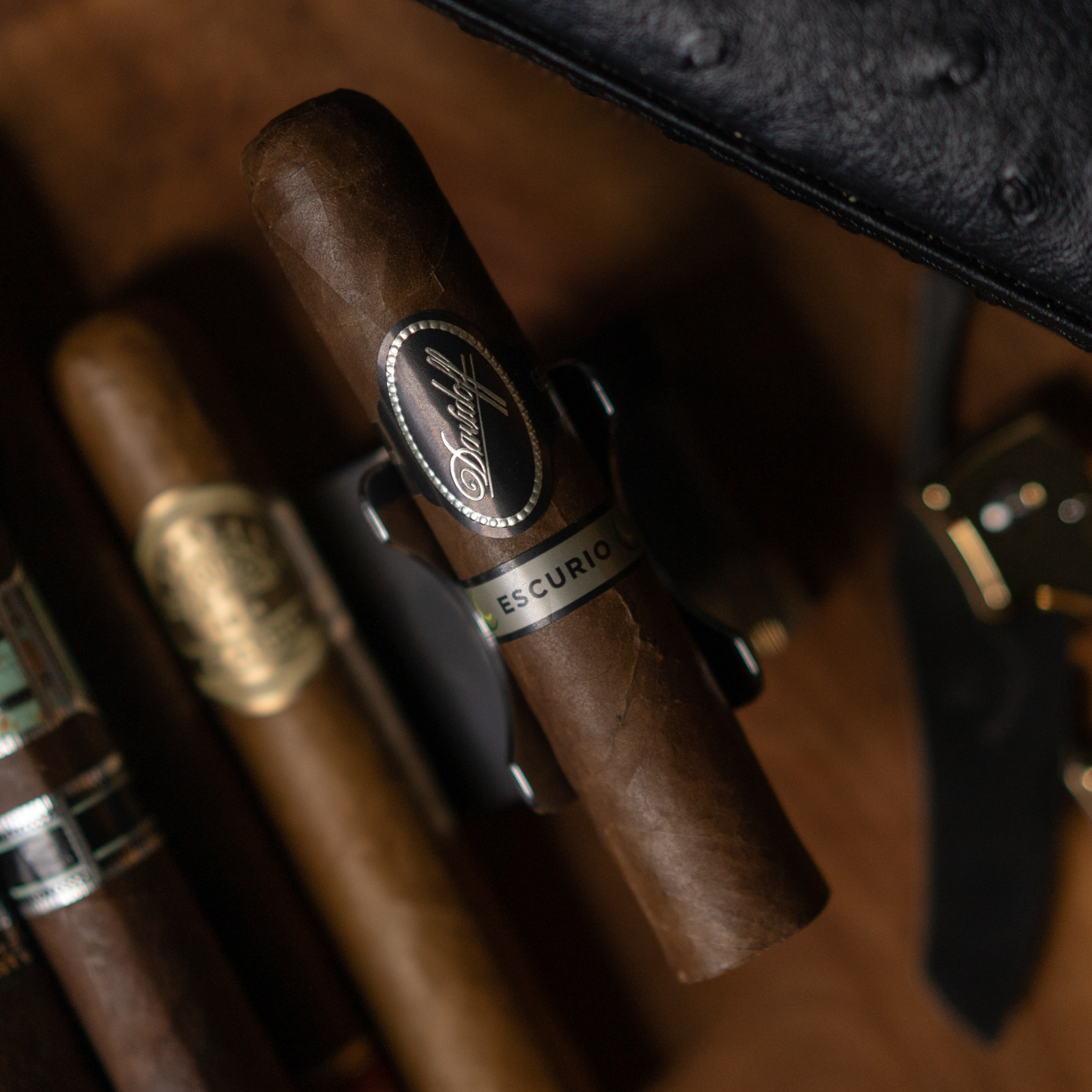 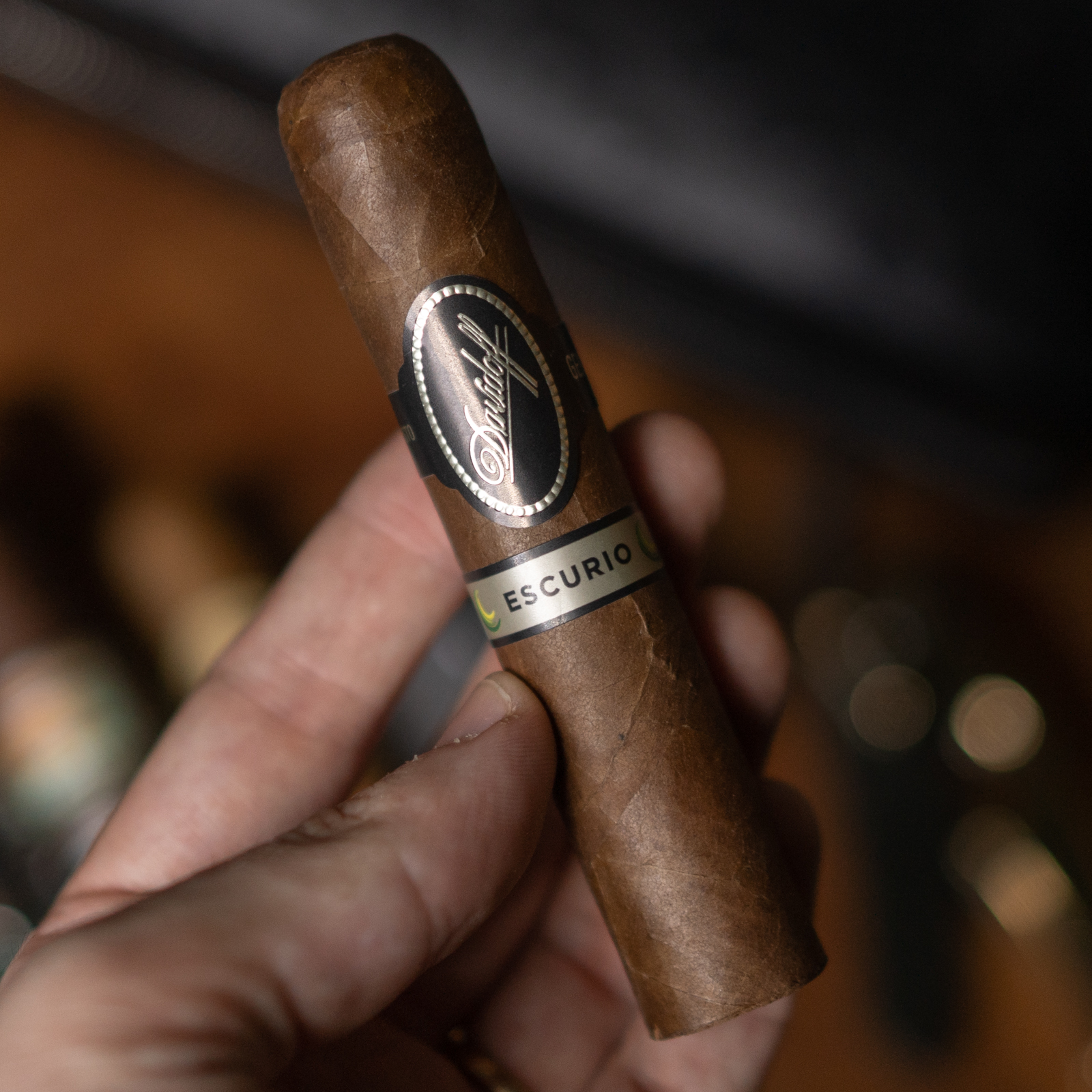 Has your mother-in-law ever come to visit and you really needed an excuse to duck out in your garage the rest of the night? Well then, just become a cigar reviewer like I did and you will always have “important business to attend to that requires immediate attention!” No lie! I actually used that line!  I had to!  I’ve used all my other ones, and I had to think of something less suspicious than normal.

My “important business,” turned out to be a plump robusto with a dead give-away of an Ecuadorian Habano wrapper.  This is indeed a blind review, but that delicate sheen and true-to-color-palette brown hue is something I never mistake.  It is crisp, veiny, and thin skinned.  If this isn’t Ecuador Habono, I’d be surprised.  The cigar is sturdy in hand and packed well.

I go with my usual cross-cut and enjoy one of the best cold draws I’ve ever had- sweet molasses and well-humidified cedar.  I toast and light with a single torch and the aromas I’m greeted with as I stoke the flame are baking-spices and wood.

The first third is very reminiscent of every coffee order I would have to, “REMEMBER, OR ELSE!,” as a young construction apprentice.  “Coffee, milk, NO SUGAR! You got that kid!” As if even a dash of Splenda would have been enough to overly sweeten the sugar-plum fairies of pile-driving foreman and journeyman that still dance in my head this many years later.

On its first impression, the cigar shows itself to be a cigar that you don’t have to babysit.  It beckons me to self-indulge in puffery and smoke ring tomfoolery.  You know… all these years of smoking cigars, and I still cant freaking blow one smoke ring!  I knew college was a waste of time and money.

The cigar maintains a very even and cool burn so far. The retrohale and aroma coming off the foot are the same as the cold draw- sweet cedar.

The second third opens with some more flavor notes- potting soil, fruit, and hazelnuts.  The aroma and retro remain the same-sweet cedar. The only thing of REAL importance that I pick up is that the cigar is getting stronger.  Before smoking tonight, I happened to bulletproof my stomach with a quadruple patty sharp cheddar cheese burger and a shot of rum. Now, lets see if this cigar can actually tip an elephant over.  I’m down to rock and roll! Its been awhile, goddamnit!

The last third maintains the cool and even burn.  There are no burn issues or draw issues.  It just keeps getting stronger. The flavors also turn harsh- coffee grounds, espresso beans, and burnt toast.  I HATE burnt toast…The aroma and retro surprisingly stay the same- sweet cedar.  As the cigar finishes, I find myself bored and my tongue cooked.  I just want a pint of vanilla ice cream and my mother-in-law to leave ASAP, so i can go back to walking around naked in my own house again. “LEAVE!”

The cigar I smoked was a Davidoff Escurio Robusto.  What do you know?!  The cigar DOES come wrapped in a beautiful Ecuador Habano wrapper and showcases exclusive tobacco harvested from the watery climates of the “Bay of Todos os Santos, Brazil.” “You can dress her up, but you can’t take her out!,” is a saying I’ve come to know all too well in this life.  First, if you’ve ever met any of the women I’ve entertained, and secondly, Ecuador Habano is notorious for covering up a poop stain.  Was it the sauna-like humidity of early August in my garage that made this new and interesting Brazilian tobacco produce a nothing-special yet stronger profile then was advertised?  The construction and combustion were some of the best I’ve seen in awhile, yet I desperately found myself bored and wanting more out such a beautifully presented cigar. The cigar crashed and burned with me hoping it would just turn into a nicotine bomb so I could at least have a good fire-fight story to share!  AND NOW, after finding out the MSRP for the stick, there’s no way I would recommend someone at least give the cigar a shot-EVEN if I had the hope that their smoking experience may fare better than mine just went! When it comes to new and interesting tobaccos, I am known as a smoker that goes where no smoker has ventured before.  As a farmer and winemaker by trade, I also appreciate the notion of terroir and want to see if I can taste the motherland.  With all that said, I have found that many new and interesting tobaccos are almost always hit-or-miss, SOOOOOO, I strongly feel you shouldn’t have to pay a ransom for potential volatility.  If you want something funky, out-of-the-box, unorthodox and different- with a better pricing scheme- I would totally recommend CAO cigars as an alternative.  For cigars similar in effort to this one: if you can snag something from CAO’s quick-t0-sell “Amazon Basin” line or their “Brazilia” brand- I don’t think you’ll be disappointed. Enjoy!

For 20+ years, Michael has been a cigar smoker and wine drinker, and takes a lot of pride in the palate he has acquired. He feels that drinking and smoking are the two best vices a man could ever have. Michael currently passes the time as an assistant wine and cider maker for two of the biggest names in the New York natural wine scene, as well as working a few shifts at an established Westchester cigar lounge. He can most likely be found sipping on something bubbly and firing up a Nicaraguan puro after a hard days work...and sometimes on-the-job, if no one is looking. As an avid reader and writer, Michael is very appreciative of the team at Fine Tobacco NYC for the opportunity to join the blind review panel.
« Blind Review: Protocol Bass Reeves Natural» Blind Review: H. Upmann Classic 1844 Robusto