Brand evangelist, digital marketer, cigar and spirits expert specializing in consumer tasting and educational events. Matthias made the long trek from his hometown of Portland, Oregon to New York City in 2007, and in nine years has hosted more than 120 events and helped promote and launch dozens of cigar and whiskey brands in the U.S. In 2016, he joined the Cigar Journal Tasting Panel, blind-reviewing pre and new release cigars.

Last night at around 8:00, the guys dropped by for another night of drinks, fine tobacco, and poker. We had a few more people in attendence this week, so we expanded to a much bigger table to accommodate everyone. The temperature was a comfortable 75 degrees, and the summer evening faded slowly faded into night as we played hand after hand of Texas Hold Em’. I also got a few great pictures.

Of the names on hand for cigars were Romeo y Julieta, Arturo Fuente, and Mi Dominicana. Among pipe tobacco smoked were the Cigar Inn “Mild English”, and a few ounces of the Timber Valley “Balkan II”.

My first stick of the night was an Arturo Fuente Special Selection that I purchased at Timber Valley Tobacco for $4.50.  I’ve always enjoyed Fuente cigars, and so as a broke college student the low price made the cigar attractive.  The cigar burned very evenly and had a bold spicy taste with a hint of sweetness to the scent.  Definitely a good smoke and I plan on grabbing a few more next time I’m out.

Next on hand was a Mi Dominicana, which one of my good friends smoked. I gave it a few tastes, and it was a mild-medium bodied cigar with a very unique scent that I still haven’t been able to quite put my finger on.

Despite the ambiguity though, I enjoyed the cigar, and Andrew ended up smoking that stick for over two hours without finishing.  At $13 a stick, even as a Presidente I don’t know if I’d find myself buying any. Both of the aforementioned cigars had excellent construction, though the Fuente did seem a bit tight.

After finishing my first cigar, I considered moving on to a Rome y Julieta Cuban that a friend gave to me, but I decided to save that for next week. And besides, another cigar really wasn’t necessary.

The poker hands were moving, chips were trading as often as the jokes were, and good friends got to catch up. Although technically Mr. Aaron Leclaire won the night, Francis Gieringer played the best poker and would have taken the most chips had we not all conspired against him at the end of the night.

Next weekend I anticipate that we’ll be expanding even more, which might mean that a new location is in order considering my back patio – wonderful smoking porch that it is – is just a bit too cozy after six or seven people.

In any case, venues may change, but it is looking like Poker & Stogie night is quickly growing into a new summer tradition that will hopefully enjoyed for many weeks and maybe even many summers in the future. And as the number of people enjoying the summer evenings increases, so will the number and variety of cigars and pipe tobaccos. A very exciting prospect!

Events like these make me excited for the FT:NYC smoke-sessions that will be coming up late-August. I’m excited to see some old friends, make some new ones, and simply have a scheduled time to take a break from the hectic New York City lifestyle!

In the past week we’ve seen a pretty substantial increase in new traffic to the site (very encouraging!), as well as a lot of inquiries via our twitter and email, so for those of you just showing up, please note that this site is still under construction. Guy and I are working on bringing all of the pages up to speed – so if you notice any half built pages, those should be up to full capacity soon.

Also, if you notice any pages that you think you could add valuable information to (e.g. “Fine Tobacco on the Cheap” or “Locations”), then drop a comment here. We want NYC deals and locations to be a cooperative project between the team and everyone else living in NYC who enjoys fine tobacco. Finally, if you are interested in being a part of the FT:NYC Team as a contributor to the site, send us an email at matthias(dot)clock(at)gmail.com! 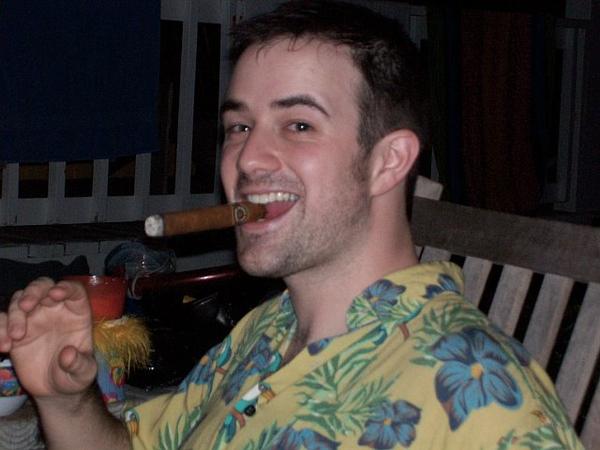 Hey everyone – looks like I’ll be a contributor to FineTobaccoNYC.  Glad to be involved! Glad to find some new friends, some new smokes, and read about what’s happening with tobacco in NYC.

I’m from the New York area, (grew up in New Jersey) and currently live in the East Village.
I’m an actor and a writer.  You can check me out at www.GuyOlivieri.com for more details.

As for cigars!  I’m a geek, so I like to keep a record of every cigar I try.  I have a little book that I tape the bands into and make notes.  Something like “June 13 – a Romeo y Julieta Reserva Real Toro on my deck.  B+ Really well made.  Medium flavor, lots of smoke, great draw.”
Well, you can see I don’t know all the terms for flavors and whatnot, but I’m learning.

My go-to cigar is the Partagas La Familia Rosada.  I can’t get enough of these.  The flavor is medium, but with a peppery taste.  Great cigar for after dinner.

I have a group of friends who meet monthly to smoke and catch up, which is my favorite appointment on my calendar.  I can often be found smoking in Union Square or Stuyvesant Park on nice evenings.

Tonight I held the my summer’s first poker & cigar night, and it rocked.  Friends brought cigars, drinks, other fine tobaccos, and of course, a poker set.  The night was a tad chilly for a summer evening hang-out, but it worked perfectly. 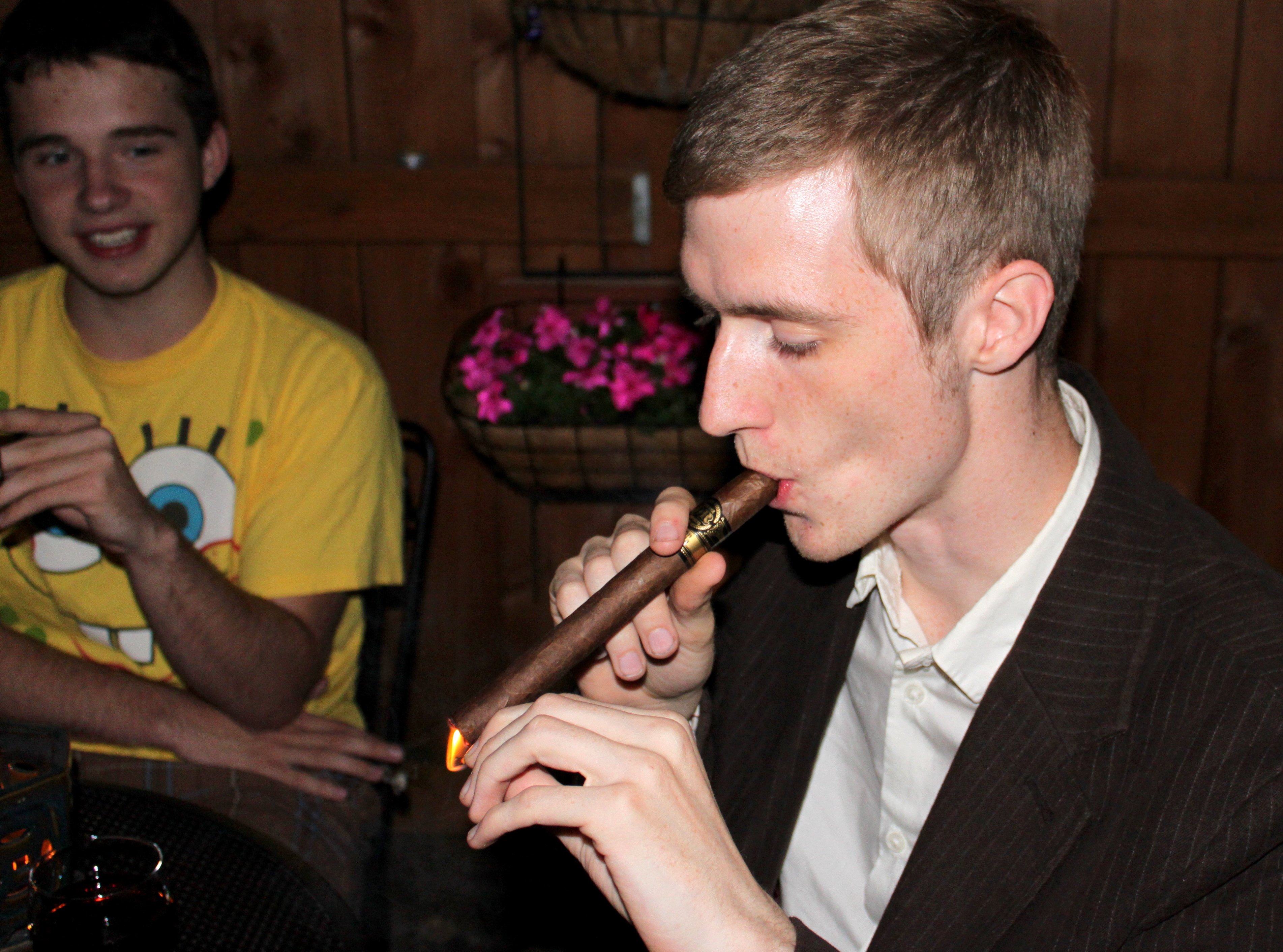 On hand were a few cost-effective Mr. B cigars that I’ve seen highly recommended online for budget smoking. I smoked a JR Cigar brand alternative (Churchill) that was wonderful and complemented the night perfectly. As the night progressed, we pulled out our pipes and traded tobaccos and recommendations – I stuck with De La Concha’s “Sir Henry Morgan”, a wonderfully thick, bold English blend, and the Nat Sherman blend #314. 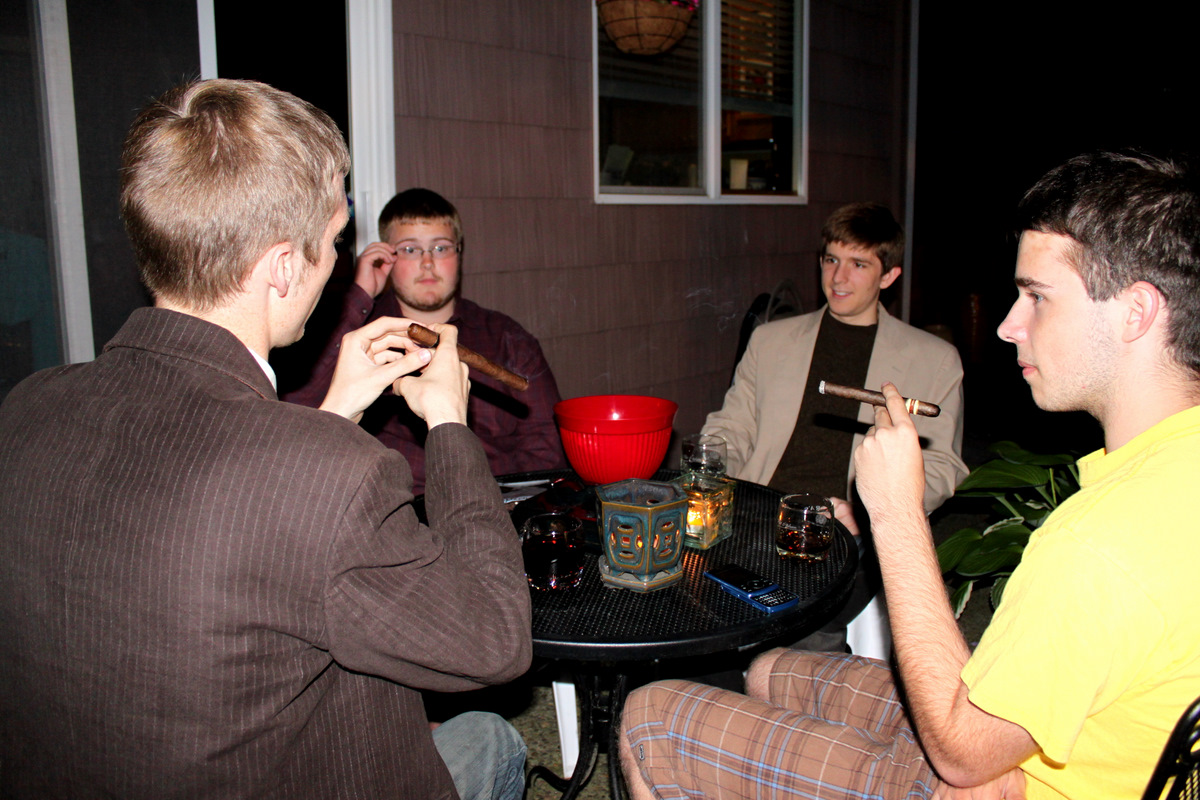 Another friend brought some well aged Scotch which accompanied the tobacco well and helped make the night the perfect event that it was.

Without a doubt, poker & cigar night will be a reoccuring theme of my summer as I am away from New York City.  I miss the city’s lounges and excellent tobacco selection, but a summer night spent on the back patio in the company of friends just can’t be beat.

The past week has found me inundated with work from both of my jobs. The first of the two every day is a morning job managing a free lunch program at a local park, and the other is an internship at Cascade Policy Institute where I research limited government solutions to many problems that Americans face every day.

All that to say, I’ve been busy.

However, I have been working on getting the website, twitter profile, and Flickr page online and updated.  I’ve also begun looking for contributors to the site. So far, I’ve heard back from a few cigar lovers in New York City, and all of them sound qualified to write for the site and help cigar lovers get connected.

For the next week or so, the main finetobacconyc updates are going to be through the twitter site (announcing new deals on cigars in the city) and new pictures uploaded to the Flickr account.

I don’t want to sound like it’s all work for me though: the 4th is coming up, and I’ve got a Romeo e Julietta Cuban waiting for me.