The new Wolfburn distillery, situated just 350m from the site of the original 19th Century Thurso site, has been successfully commissioned and production of fine single malt scotch whisky has today commenced.
Construction of the Wolfburn buildings was carried out by a group of local contractors, with the inner workings being crafted by Forsyths of Rothes, the world-­‐leading distillery fabricators. Building work began in August and the distillery
equipment was installed across November and December. The entire project has been successfully completed on schedule and exactly as specified. 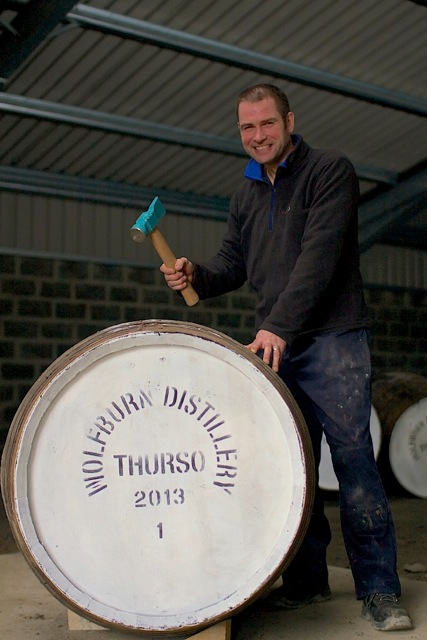 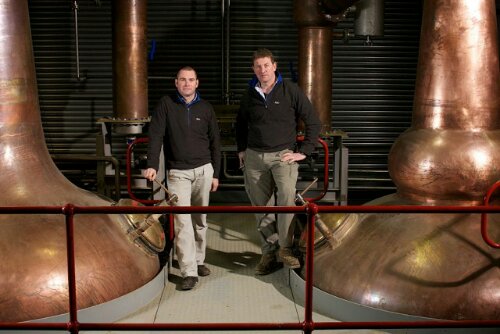 “This is an enormously exciting moment for everyone involved,” commented Shane Fraser, Wolfburn production manager. “To watch the distillery go from concept to reality has been a truly superb experience. Commissioning went very smoothly indeed -­‐ the equipment performed exactly as expected -­‐ and the first spirit, with a wonderful malty flavour, is already flowing from the stills.”
The first oak casks are now full of new Wolfburn spirit – the first such maturation to take place in Thurso in over a century.
The first Wolfburn distillery was built in 1821 and was passed down through subsequent generations of the Smith family; in its heyday it was the largest distillery in Caithness. Production ceased during the latter half of the 19th Century –
the exact date is not known. The first bottling of the next generation of Wolfburn single malt whisky is expected in early 2016.

Both of these experiments study the effects of extreme heat on oak barrels and the flavor of the bourbon inside.

The Hot Box Toasted Barrel Bourbon involved placing the barrel staves into a “Hot Box” at 133 degrees Fahrenheit. Then, the staves were steamed before being assembled into a barrel. The goal was to drive the flavors deep into the wood.

Next the barrels were filled with Buffalo Trace Rye Bourbon Mash #2 and left to age for 16 years and 8 months. The resulting bourbon is a well-balanced whiskey with fruity notes complimented by a caramel and buttery taste.

The #7 Heavy Char Barrel Bourbon Whiskey experiment used barrels which were charred for 3.5 minutes, as opposed to the normal 55 second char used by Buffalo Trace typically. The barrels were then filled with Buffalo Trace Rye Bourbon Mash #2 and left to age for 15 years and 9 months. The end result is a bourbon with an oaky aroma followed by a body that is heavy and complex. A smoky and robust flavor, with fantastic woody notes and hints of vanilla, fruit and tannin. It is dry and balanced.

“Toying with barrels is fun and interesting. It’s quite dramatic to see how something as simple as an extra heavy barrel char can influence the taste of bourbon,” said Harlen Wheatley, master distiller. “Both of these experiments yielded very interesting and balanced flavor profiles that I think most people will enjoy tasting.”

These “hot” barrels are part of the more than 1,500 experimental barrels of whiskey aging in the warehouses of Buffalo Trace Distillery. Each of these barrels has unique characteristics that differentiate it from all others. Some examples of these experiments include unique mash bills, type of wood and barrel toasts. In order to further increase the scope, flexibility and range of the experimental program, an entire micro distillery, named The Colonel E.H. Taylor, Jr. “OFC” Micro Distillery, complete with cookers, fermenting tanks, and a state-of-the-art micro still has been constructed within Buffalo Trace Distillery.

The Experimental Collection will be packaged in 375ml bottles. Each label will include all the pertinent information unique to that barrel of whiskey. These whiskeys will retail for approximately $46.35 each. These rare experimental bottles should be available in late January or early February. For more information on the Experimental Collection or the other products of Buffalo Trace Distillery, please contact Kris Comstock at kcomstock@buffalotrace.com

Roll Out Nationally in 2013

Westward is an original malt whiskey that is inspired by the Irish tradition, but crafted in a unique and distinctively American style.  Every hand-numbered bottle begins with a wash of 100 percent locally sourced Northwest two-row barley, which is then fermented with Scottish and American ale yeasts and double pot distilled for exceptional character and depth.  This rare spirit matures in full-size, two-char new American oak barrels for at least two years, allowing Oregon’s dry, hot summers and wet, cold winters to contribute to its rich, smooth flavor.

“Christian and I are whiskey lovers at heart, so it seemed only natural for us to take that passion and turn it into a uniquely flavorful malt whiskey that fellow whiskey lovers will enjoy,” said Thomas Mooney, co-owner and CEO of House Spirits.

Available immediately in California and Oregon, Westward whiskey will be available in New York and DC in April, and it will roll out to other markets over the next few months. The anticipated retail price for a 375ml bottle is $49.99.  West Coast retailers stocking Westward include The Wine House, K&L Wine Merchants, Beltramo’s, San Francisco Wine Traders, Hi-Time Liquor, and Cask.  Leading restaurants and bars pouring Westward include Seven Grand, Wood and Vine, Ray’s and Stark, Chateau Marmont, and Son of a Gun.

Christian Krogstad, the founder and master distiller of House Spirits, added that “we have taken something rooted in tradition and created an inventive, new style of whiskey that captures the terroir of the Northwest.”

House Spirits Distillery is a leader of America’s craft distilling resurgence, and the anchor of Portland’s famous “distillery row.”  Its award-winning products are batch-distilled with an intense, passionate, near-obsessive pursuit of quality using ethically sourced ingredients, and they include Aviation American Gin, Westward Oregon Straight Malt Whiskey, Krogstad Aquavit, and a line of limited release small-batch spirits.  House Spirits has developed a loyal following among food and beverage connoisseurs, and its brands are distributed nationally by Southern Wine & Spirits, RNDC, and other leading wholesalers.  For more information please visitwww.housespirits.com. 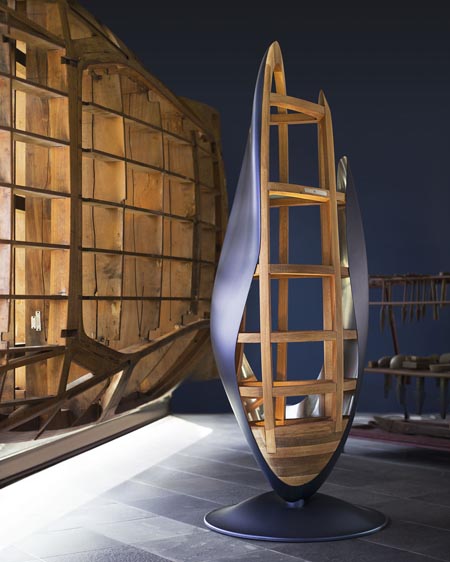 The ultra-premium Scottish whisky, Chivas Regal, and Italian designer, Pininfarina, joined forces to create Chivas 18 by Pininfarina Limited Editions, which rolled out January 2, 2013 in over 30 countries.

The series includes two Chivas 18 collectible display cases and one made-to-order display unit, an artistic piece of furniture hand crafted in Italy by Pininfarina. Each includes a bottle of Chivas 18 with Pininfarina’s design notes and Italian company logo proudly displayed. The limited edition design theme is “The Drop” which dictates the shape of the pieces.

The first edition, based on a streamlined drop, a delicate shape in a rich blue metallic finish with a wood veneer, represents the oak barrels used during the aging process of Chivas 18, capturing 85 flavors in each drop. Chivas 18 by Pininfarina Limited (Edition 1) is priced at $145.

The second edition features a larger drop shaped case and solid wood inlay. Included are the limited edition bottle along with two glasses each individually numbered to symbolize the exclusive status. Chivas 18 by Pininfarina Limited (Edition 2) is priced at $585.

The third edition, with its smooth sleek shape, incorporates both Chivas 18 and Pininfarina’s values in luxury designs as well as the collection’s drop theme. This elegant piece of furniture features an oak internal structure, covered in aluminum. A light at the base brings this creative piece to life.  At this time, the retail price is still unknown.

Chairman of Pininfarina, Paolo Pininfarina said: “Italian style means a sense of proportion, simplicity and harmony of line and we applied this sensibility to the designs we developed for Chivas 18.”

In March 2011, I was fortunate enough to be invited to Camp Camacho in Honduras, to tour the fields and factories and observe what a Central American premium hand rolled cigar manufacturing was all about. Of the many new lifelong friends I made on the trip, one of my favorites is a madman from Kansas, named Paul. Besides being one of the funniest guys I’ve met through cigars, Paul has a voracious apetite for all things consumable, cigars being one of his favorite.

Paul recently spent an afternoon with me running around NYC with me to visit my favorite shops. My goal was not to “WOW” Paul with the NYC scene, but rather let him reconnect with some buddies who were also on the Honduras Trip. Paul is a student in Kansas and a PT employee at The West Side Humidor in Witchita, Kansas. He’s got a better palate than I, and working at a cigar shop, certainly tries a lot more than I do.

The 3 midtown shops that we visited were Davidoff Madison Ave., DeLaConcha & The Grand Havana Room, we also visited O.K. Cigars in SoHo.

Here’s a few pics of the man in Honduras:

Our Man, Chillaxin in deep thought back at the Camp Camacho Hacienda

Our first stop was Davidoff of Geneva’s Madison Ave. Flagship Location (Davidoff Madison Ave.). We were able to catch Chris and Lino and share a cigar while we were there. These are 2 extremely knowledgeable, extremely personable guys. We had a great time in Honduras w/them.

Next, we went to see Ron and Chris from DeLaConcha. Ron was out of the shop with his family for the holiday, but we were able to chat & smoke with Chris while we were there. I love chatting w/Chris. He always makes me laugh.

Hanging with Chris from DeLaConcha

Then, we went to my stomping ground, The Grand Havana Room for a smoke and some Flor de Cana Rum, that made us reminisce about our ossified times in Honduras. Good times.

Lastly, we took the subway downtown to SoHo and tried to catch Len at O.K. Cigars. He was out for the holiday as well, but we toured the shop and fell in love with come classic tobbaciana on sale. Great shop if you are ever downtown looking for a smoke. We didn’t take any pics here (probably, because of the rum at our last stop.)

I had a great time running around the city with Paul and I hope that we can do it again soon. I’ll come to Kansas too, really. Say hello to Ryan and Gordon also!

“Rolling through New York with Big Sexy him self was a blast. The man has his finger on the thriving pulse of the smoking comunity”.