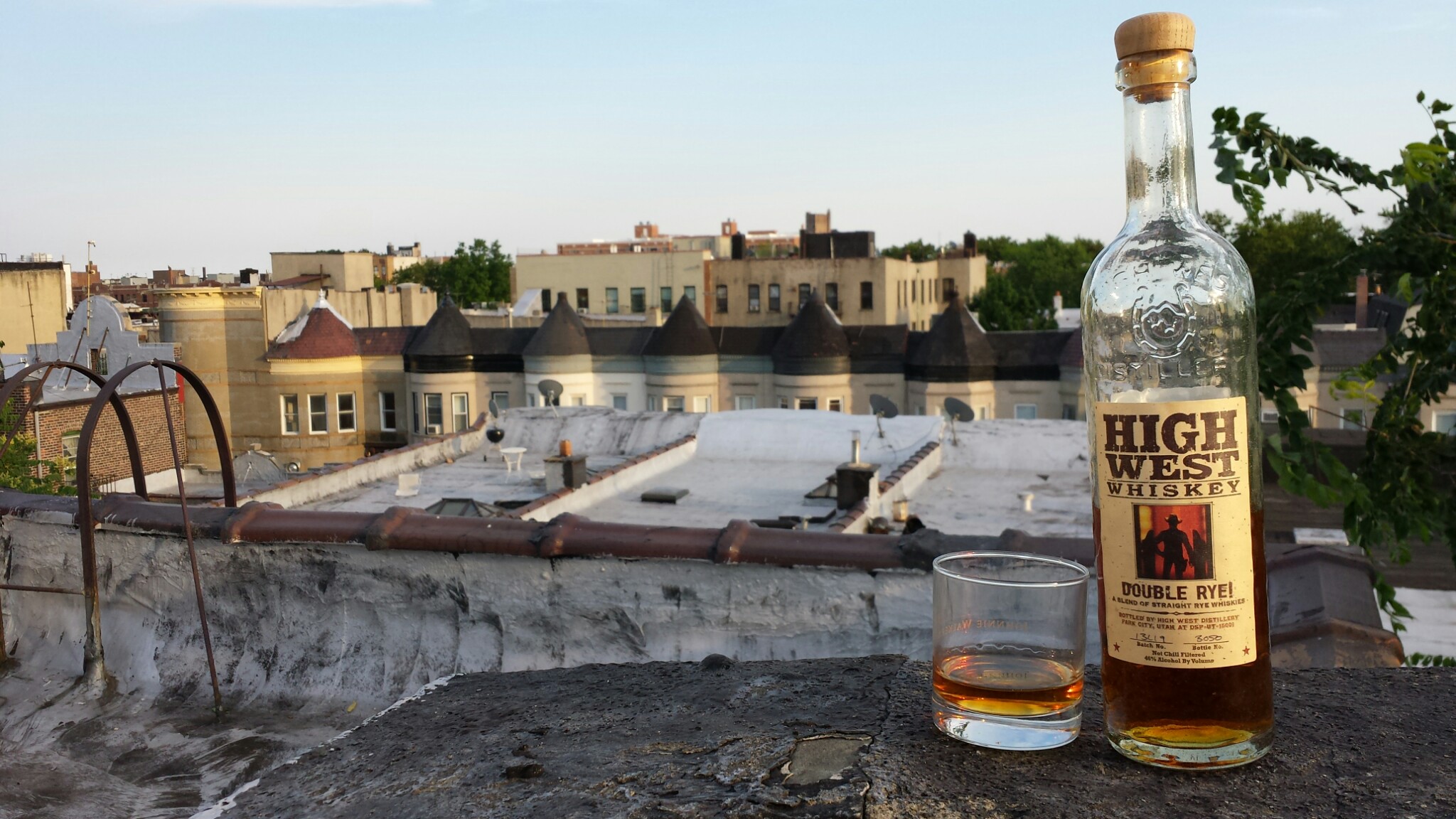 “It’s about damn time.”That was the first thought that came to mind when I sat down for a rooftop dram of this marvelous straight-rye blend. I’ve been drinking the Double Rye from the High West Distillery on and off again now for about a year. It’s just one of those whiskies that keeps you coming back again and again.

High West Double Rye is unique among rye whiskey in that in is actually a blend of two rye whiskies, a 2 and a 16 year. The result is a rye experience that switches back and forth between ultra smooth and kick in the pants spice.
But now for the review.

Spices and more spices. As other reviewers have noted, there are some really interesting gin notes, notably a subtle evergreen smell along with some oak.

The Double Rye opens up very smooth with vanilla and caramel and transforms in a moment to a flavor bomb of rye spices, confectionary spices, and an interesting mix of botanicals. Lots of character!

The finish is long and satisfying, leaving a lingering taste of orange peel and rye spice across the tongue. Really enjoyable.

This really isn’t a rye whiskey that any American whiskey sipper can afford to miss. For just $35 a bottle, it’s a standard on my shelf for the foreseeable future.
Final Grade: A
February 12, 2013
Spirits Bourbon, buffalo trace, whiskey

FRANKFORT, Franklin County, Ky (Feb. 2013) – Buffalo Trace Distillery marks the halfway point in its quest for the perfect bourbon with the release of its eighth round of Single Oak Project Bourbon.

All of the bourbons that comprise this release entered the barrel at 105 proof, aged within the wooden ricks of Warehouse K, with a number 4 barrel char after the staves were seasoned for 12 months. This allows the release to focus on three other variables, the recipe, wood grain size, and tree cut. All of the other variables such as aging warehouse, entry proof, char level, and stave seasoning remain constant.

“Many people will find this release interesting since the entry proof is 105 this round – which some fans contend is better. Bourbon drinkers can taste and decide if they like wheated or rye recipe bourbon better at the 105 entry proof.” said Kris Comstock, bourbon marketing director.

So far, more than 2,221 industry expert and consumer reviews have been logged online at http://www.singleoakproject.com/. These whiskey reviews will determine which Single Oak Project Bourbon is the favorite of fans worldwide. Buffalo Trace looks forward to more reviews, to hear what bourbon drinkers think, and will craft the perfect bourbon based on consumer feedback.

Now halfway through the project, barrel number 106 has fought its way back to the top, after being knocked off a few months ago by barrel number 97! “Barrels number 97 and 106 have been vying for the number one spot for several months now,” continues Comstock. “But with two more years to go, any of these bourbons still stand a chance to be declared the winner. And it’s not too late to get involved even if you’re new to the project!”

After a consumer reviews a bottle online, they will be availed of all the aging details and provenance of the barrel. They can interact with others who’ve also reviewed the barrel, compare their reviews, and even learn for themselves which characteristics they enjoy most, in order to help them select future favorites. Participants online will earn points after each review and most importantly, actively participate in Buffalo Trace Distillery’s quest to create the perfect bourbon!

The Single Oak Project is part of an intensive research project Buffalo Trace Distillery started conducting in 1999 by hand picking 96 trees with different wood grains and then dividing them into a top and bottom piece, yielding 192 unique sections. From there, staves were created from each section and were air dried for either 6 months or 12 months. After all the staves were air dried, a single barrel was created from each tree section, resulting in 192 total barrels. These barrels were given either a number three or a number four char and then filled with either wheat or rye recipe bourbon.

To further the variety of experiments, the barrels were filled at two different proofs, 105 and 125 proof. And if this wasn’t enough, two completely different warehouses were used, one with wooden floors and one with concrete floors. In total, seven different variables were employed in Buffalo Trace’s ultimate experiment.

For eight years the Distillery continued with its tracking process, creating intricate databases and coming up with a potential of 1,396 tasting combinations from these 192 barrels! 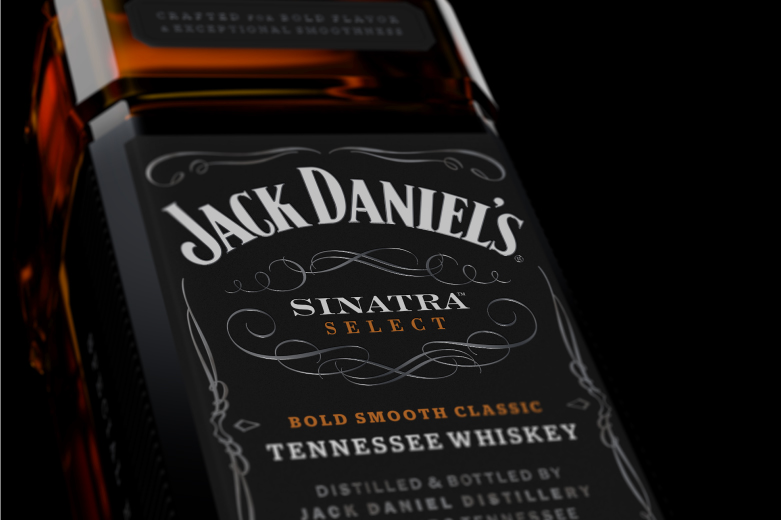 Jack Daniel’s Sinatra Select is a special edition whiskey crafted to honor Frank Sinatra’s fifty-year friendship with Jack Daniel’s. Frank was a fiercely loyal, lifetime fan of the brand, and Sinatra Select was designed to be both a classic expression of style and an homage to two American icons. This exclusive outpouring of the distiller’s craft is matured in proprietary oak barrels for a bold flavor, timeless character and exceptional smoothness. Sinatra Select will be available at high-end retail stores and major airports worldwide, debuting in Las Vegas and later spreading to destinations including New York, London, Sydney and Singapore.

Frank Sinatra lived a style that was truly his own. His independent spirit made him stand out in his time, and continues to distinguish him today. The design for Sinatra Select balances Jack Daniel’s legacy and Frank Sinatra’s legacy with a look that is sleek and stylish, a reflection of Sinatra’s timeless good taste.

The vessel designed for Jack Daniel’s Sinatra Select is a taller, sleeker interpretation of the Jack Daniel’s Tennessee Whiskey bottle, with a weighted base, an embossed metal shoulder label and a medallion featuring an icon of Frank’s familiar fedora.

Sinatra Select incorporates many of the brand’s defining elements, and adds new ones specific to this expression. The capsule features the Jack Daniel’s Country Club logo created by Frank to adorn a blazer he wore in the 1950s—a statement of his independent way of living.

Sinatra Select is packaged within a bespoke bottle made for this special edition product. The branded box incorporates a medallion with the Frank Sinatra fedora icon and orange ribbon. The color orange works as the perfect complement to Sinatra Select’s classic black color palette. Sinatra said that orange is the happiest color, and often used a bright orange pocket handkerchief to add some pop to his tailored suits and tuxedos. Inside is a special book that tells more about the story of Frank’s fifty-year relationship with Jack Daniel’s.

This super-premium offering from Jack Daniel’s celebrates a man who lived without hesitation or compromise. The result is a distinctive expression of style and grace, in keeping with the kindred spirit that it honors.
Design work credit to Cue at www.designcue.com 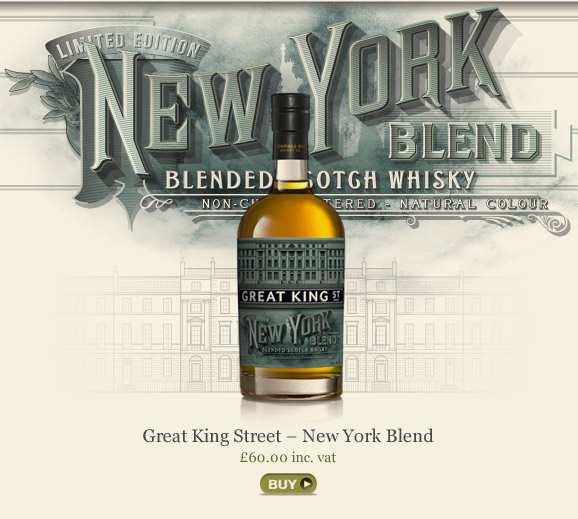 We are delighted to announce the release of the first in a series of one-off, regional Scotch whisky blends under the Great King Street label: the “New York Blend”. Created for the 2012 New York Whisky Fest, the whisky is dedicated to Patrick J. Duffy, the man who legend has it was responsible for the first branded and bottled Scotch whisky to arrive in New York in 1894. The blend is based on an actual recipe from the 1890s.
John Glaser has created only 1,800 bottles of this unique, smoky, full-flavoured Blended Scotch whisky. The New York Blend uses lots of peaty single malts, plenty of sherry cask-aged single malts, and a much higher proportion of malt to grain whisky (80%/20%) than is typically used today. Just as the finest blending houses would have done in 1894.

Bottled at a higher strength of 46%, Great King Street – New York Blend will only be available in the US, primarily in the New York Metropolitan area, following its launch on Saturday 27th October. However, we are also offering a few bottles for sale on an exclusive basis from our UK-based web shop so if you would like to pick up a bottle, don’t delay! 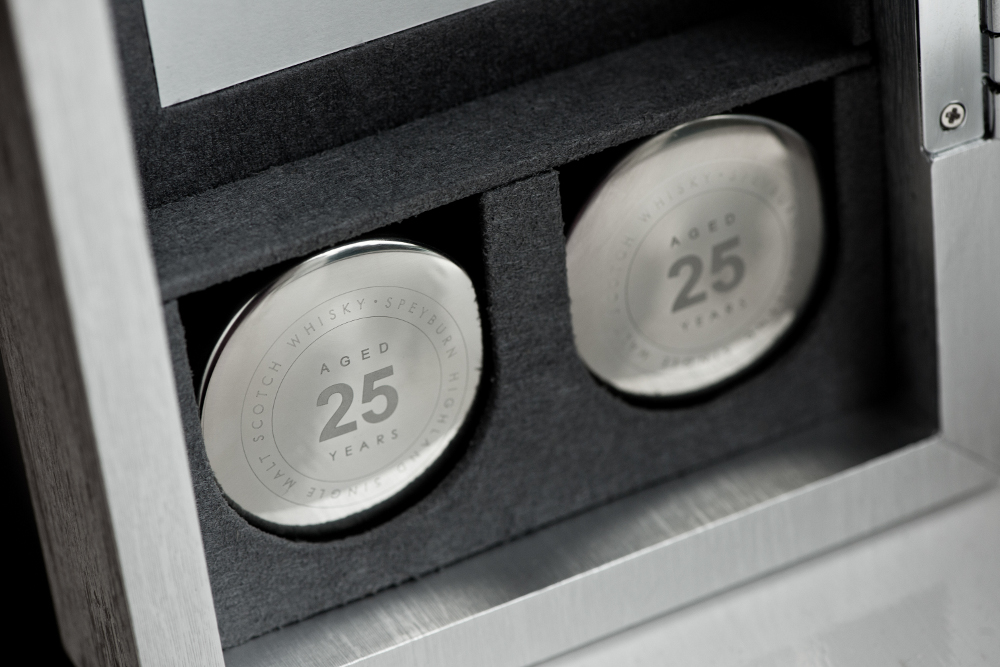 Speyburn Distillery, the producer of Speyburn Single Malt Scotch Whisky, is pleased to announce that the successor of the World Whiskies Awards 2012 Gold-Medal-winning Speyburn 25 Year Old will soon be available in markets around the world featuring exciting new packaging. The relaunch of the much-admired premium expression of Speyburn follows a successful year for the Scottish brand.

The oldest and most exclusive Speyburn yet has been a hidden gem and a favourite for whisky aficionados for years. It didn’t come as a surprise when earlier in 2012 the coveted Speyburn 25 Year Old ‘Solera’ was named by the World Whiskies Awards panel as the best in its category. Now, the new and reinvented premium expression from the iconic Speyside distillery has arrived. It’s simply called Speyburn 25 Year Old.

The whisky for this all-new Speyburn came from American oak Fino sherry and exbourbon casks of the highest quality. The spirit matured entirely on site at Speyburn Distillery, on the banks of Granty Burn. The whisky is bottled at premium strength of 46% ABV. It is unchill-filtered and shows its natural colour.
Speyburn 25 Year Old has a vibrant and bright aroma, rich with lime honey and lemon peel notes, accentuated by fragrant tropical fruit. The taste is rounded and smooth. Sweet to begin with, it opens up with toffee, creamy vanilla and pink grapefruit flavours and drifts gently towards a long and warming finish.