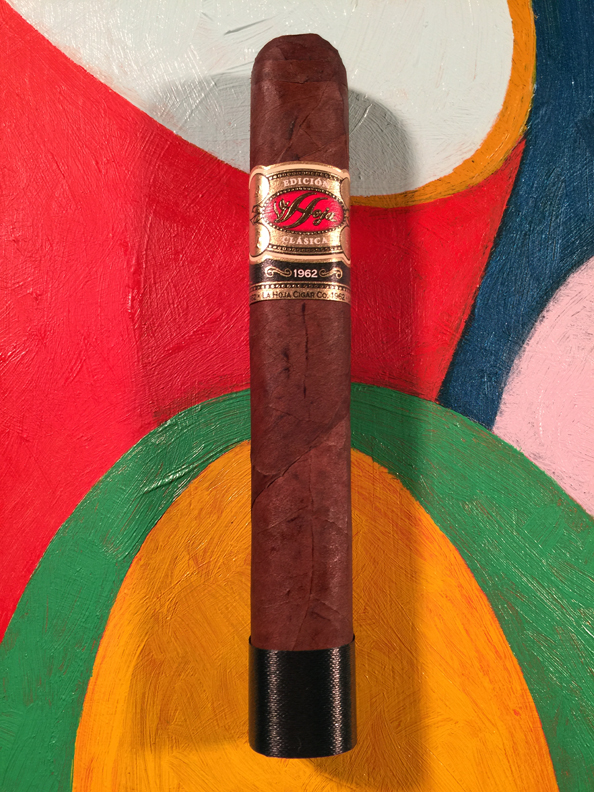 This cigar was featured at our last Straight Up & Toasted cigar and whiskey tasting event. The Clasica is a new release from La Hoja Cigars, one of New York’s most up-and-coming brands known for it’s dedication to quality, construction, complexity, balance, and flavor. 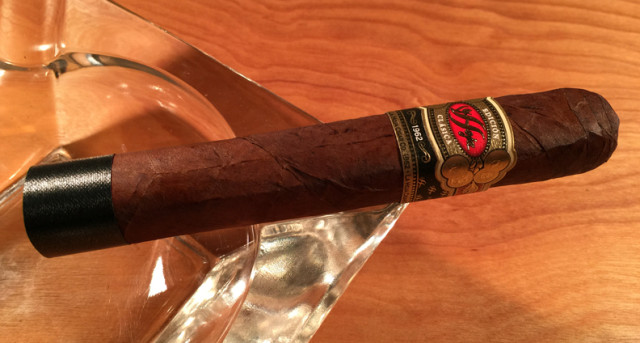 The Edicion Clasica has a dark chocolate wrapper with minimal smallish veins, a very slight oily sheen, and a very smooth dry satin texture. The seams are visible but the wrapper is noticeably wrapped well around the cigar and still shows good construction. A nicely applied double cap, and comes packaged with a foot band. The cigar also has an even sponginess throughout and the foot shows an even dense bunching.

Cold Aromas: On the wrapper, there is cedar, a touch of earth and not much else. On the foot, there is cinnamon, a touch of white pepper, a hint of chocolate, and overall on the sweeter side. The cold draw is salt, cedar, a bit of earth and musk, which makes present the good amount of fermentation and aging this tobacco has gone through. Also to note, the wrapper tobacco leaves a salty taste on the lips from the head of the cigar. The draw is an even to slightly loose tension, which is great.

First Third: The first notes give way to a very soft white pepper, salt, a touch of cedar, and a bit ofmusk. A nice cream with a bit of a gritty earth on the finish rounds out the initial draws. From the start of the cigar the mouth-feel and retrohale of the smoke are exceptionally smooth. The aroma is characterized of cedar, dark chocolate, earth, and leather notes. Staring off with a close to razor shape burn, the ash is tight but fragile looking (flaky, but not) and is a pale gray with slightly darker, very thin ring lines. The smoke is medium to full in body, medium to full in strength, and medium to full in flavor. Progressing through the first third, the earth, cedar, musk, cream and leather take hold as the main notes, with minor notes of salt, dark chocolate and a slight soapy floral. The smoke is still very smooth, with a clean crisp finish in the mouth, while leather and salt last through on the finish in the nose. The smoke is overall very dry feeling, and cool with no spices to be found. Only a touch of white pepper comes through here and there. Toward the end of the first third, a touch of bitter cinnamon start to also last on the finish. 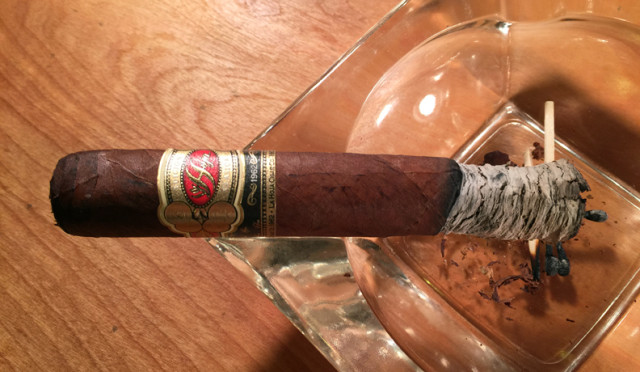 Second Third: Transitioning from the first to second third, a little spice comes up, but only last for a moment and primarily on the tongue. Notes are still characterized of earth, leather, musk, even though it has come down a bit, cedar, chocolate, salt, and a slight floral. The ash fell off on its own as one solid chunk at 1.5”. The cigar starts to lose its razor sharp burn and seems to do so when the wrapper leaf is overlapping another part of the wrapper leaf with concentration at the seam. Though, the cigar is still performing well and flavors aren’t being lost due to the burn. It may need a minor touch up here and there. The chocolate comes up a little, with now entering a slight espresso note to complement, while the salt has moved down a bit. The earth, leather and cream are still holding strong. The aroma is also still of leather and salt notes. The smoke is medium to full in body, medium to full in strength, and now moving up to full in flavor. The smoke stays fairly cool as the cigar progresses through the second third. This cigar also gives off nice creamy plumes of smoke. 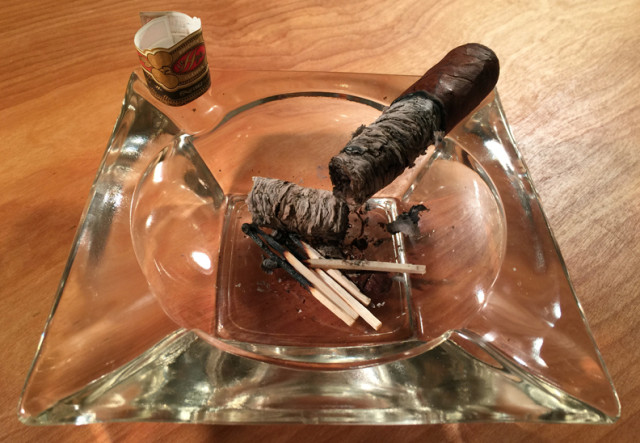 Final Third: Starting into the final third, I did have to give the cigar a minor touch up. The flavors are still holding with the cedar and leather taking the fore, with the earth moving down just a little. The espresso has come up a bit with the chocolate; the salt is still moving down but sticking around. The band is a self-adhesive and comes off cleanly. The musk is making more of presence in the aroma and the profile is still holding at medium to full in body, medium to full in strength, and the flavor moving back down to medium to full. The cream is also lasting through the finish, while the smoke in the mouth is getting slightly grittier and the retrohale being very smooth. As the cigar gets down to the nub, the chocolate and espresso both begin to last on the finish, and the smoke stays fairly cool. The leather, earth, cream, musk, and cedar still hold their notes quite strongly to the end.

This cigar screams class, from its top-notch construction, to its choice selection of rare filler, binder and wrapper tobaccos, its complex earthy profile and extremely smooth smoke production. All these characteristics make up an exceptional cigar and a one-of-kind experience. Though, I did have to touch it up a couple times throughout the session, each time was only a minor case. The cigar, its construction and flavors held strong and never strayed away from its intentions of providing a fine experience. The complexity lasts through the duration of the smoke, with its major notes being leather, earth, musk, cedar, and cream and minor notes of salt (though, the salt is a major and minor note, depending on where in the session one is experiencing this note), dark chocolate, and very slight hints of espresso, floral notes, and white pepper. 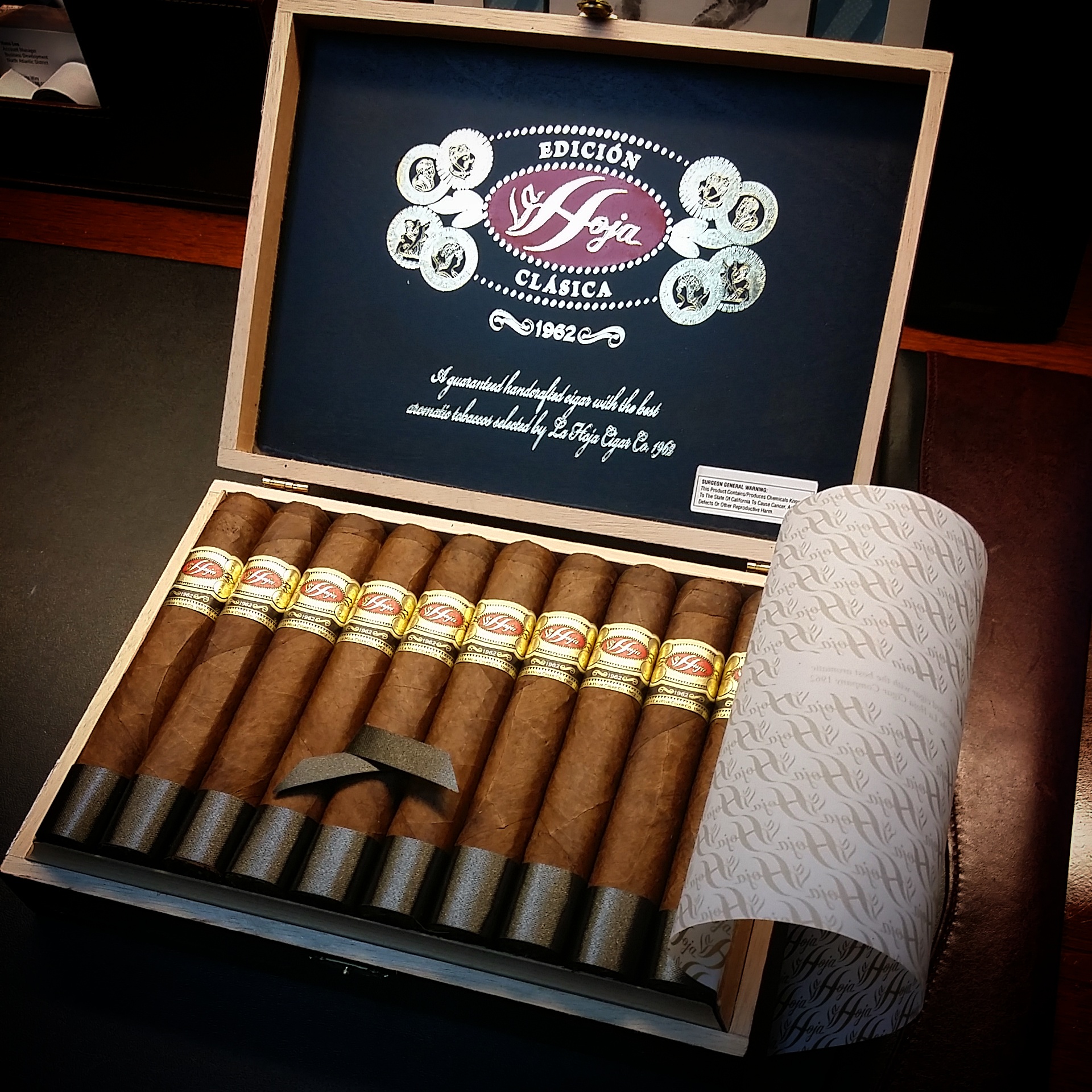 Starting at 7pm, the event ran well into the evening. Glenfiddich and La Hoja were accompanied by a local Jazz quartet that played a sample of American jazz classics.

Merchants NY Cigar bar, the venue for the event, offered guests access to their luxurious lounge area with full bar and food service, a level of luxury only three other venues in all of New York City can boast. The event was also joined by Sara Elizabeth of Somm in the City.