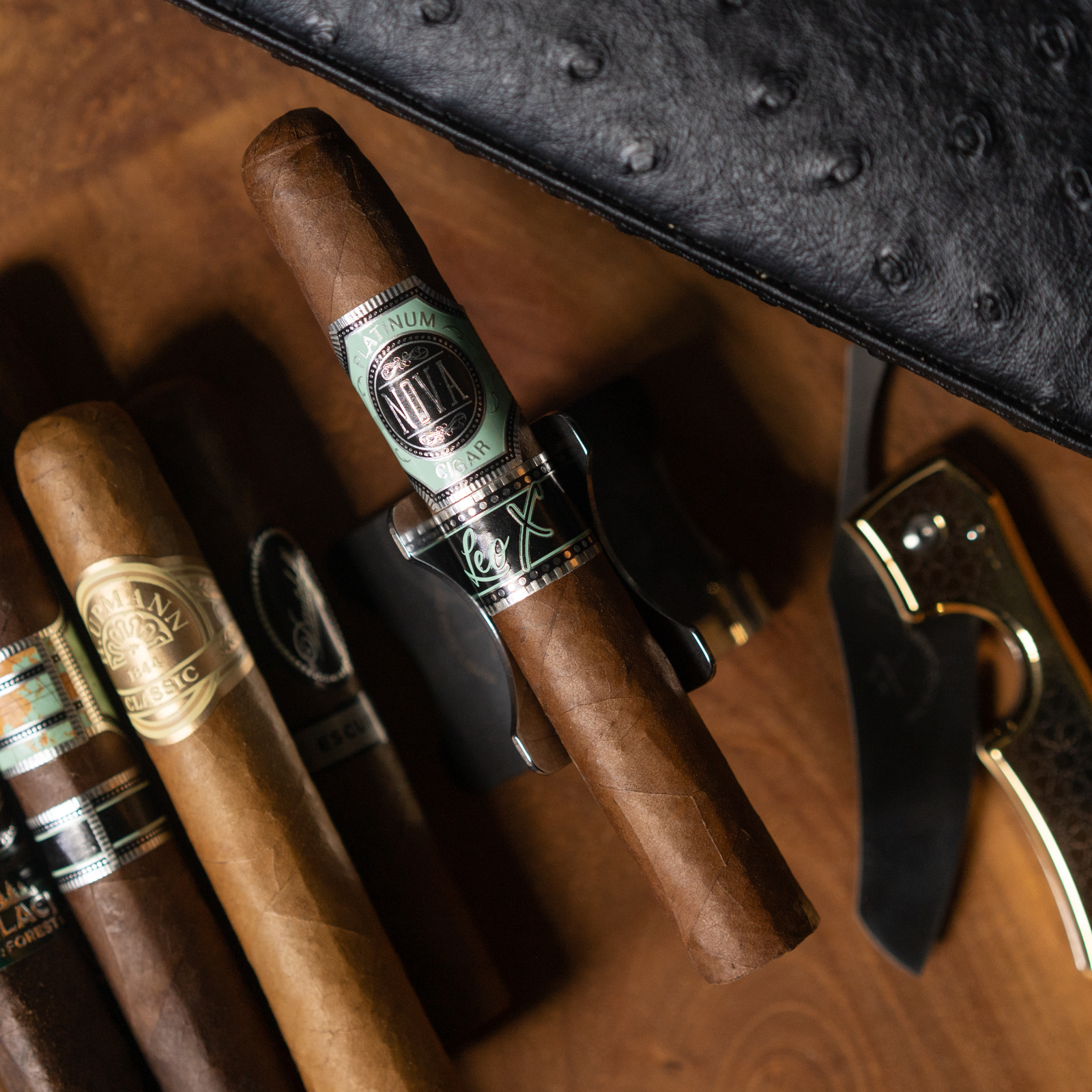 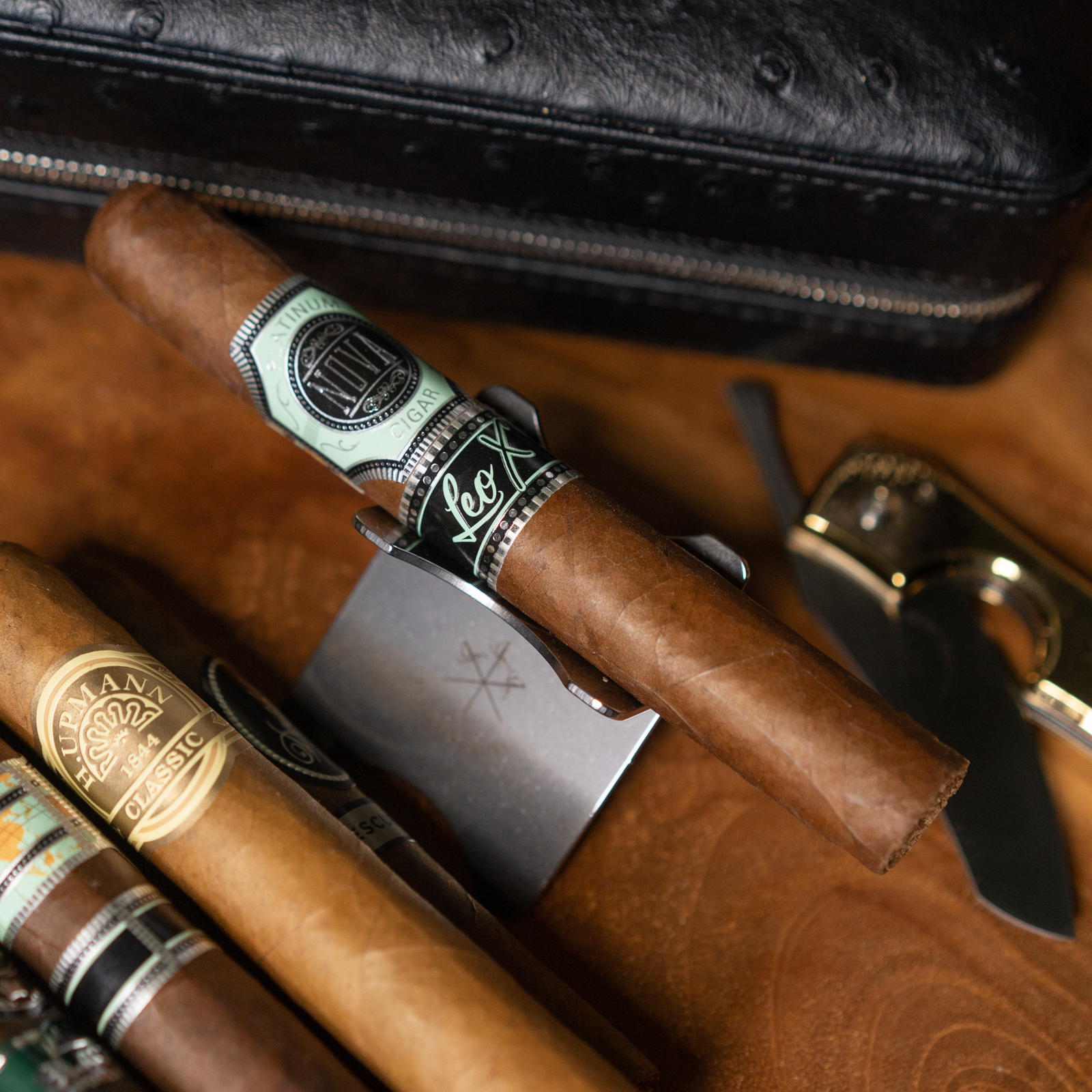 Triple cap rosado wrapper.  Very lightweight in my hands.  Packed not too loose, and not too tight either. The cigar has a nice chocolate and cedar aroma.

The cold draw is on the looser side.  Sweet cedar on the breath.

It takes a while for the cigar to toast and light.  At combustion I can make out the presence of a tiny pinhole tunnel. Hope this doesn’t effect anything.

The first third is bold with lots of jalapeno pepper, espresso, and hay bale sweetness.  It is a very pleasant smoke on first introduction.  I find the cigar to be a little delicate, even with my notorious slow smoking pace.  I recommend babysitting the heat factor.  However, there is still lots of flavor development throughout the first third, such as chocolate, hazelnut, wood, and earth with a black coffee finish.  Leathery retrohale. I like it! 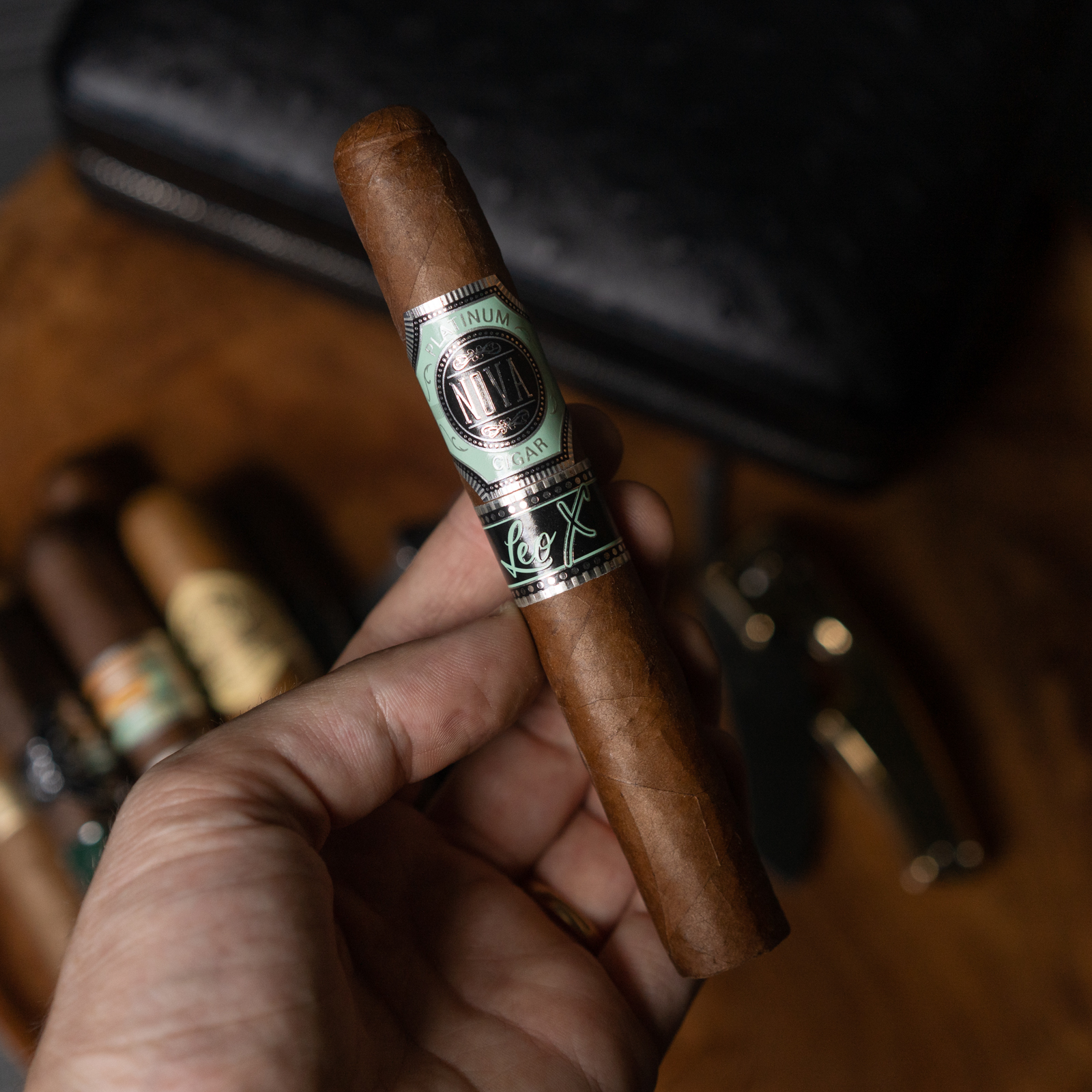 The second third finally reigns in the heat.  I don’t have to tip-toe around my puffs.  The cigar is more nuanced with pencil shavings and leather and a strawberry hard-candy finish.  The smoking experience is definitely on the creamy side. There is still leather on the retrohale as well as in the smoke aroma.

The last third is very leather forward.  The cigar is very creamy, but begins to burn hot again.  Harsher flavors begin to develop like espresso and hazelnuts.  The retrohale and aroma are still leathery.  The cigar finishes fairly bitter with notes of raw garlic!

What can I say?! The Platinum Nova Personal Reserve Leo X was a bit of a roller coaster ride.  I love heavily nuanced cigars and flavor bombs.  The cigar blend also concealed some tobacco varietals I had never tried.  To me its worth being curious over, minus the heat problems and nasty finish.  It’s a $22 stick with not as much clout as a Davidoff, but if you feel like being a big spender for the weekend- why the hell not?!  If your a fan of leathery flavor notes, or just want to to swap out your usual Ecuadorian shade wrapper cigar for a change-of-pace, I wouldn’t hesitate recommending the Platinum Nova Personal Reserve Leo X.  I’m a picky smoker, with picky habits and I usually classify cigars into tow categories: “Boring!,” and “Not Boring!” The Platinum Nova Personal Reserve Leo X falls into the “Not Boring!,” category. It’s also more affordable and more flavorful then the Limited Edition Platinum Nova Toro I had previously reviewed. Enjoy! 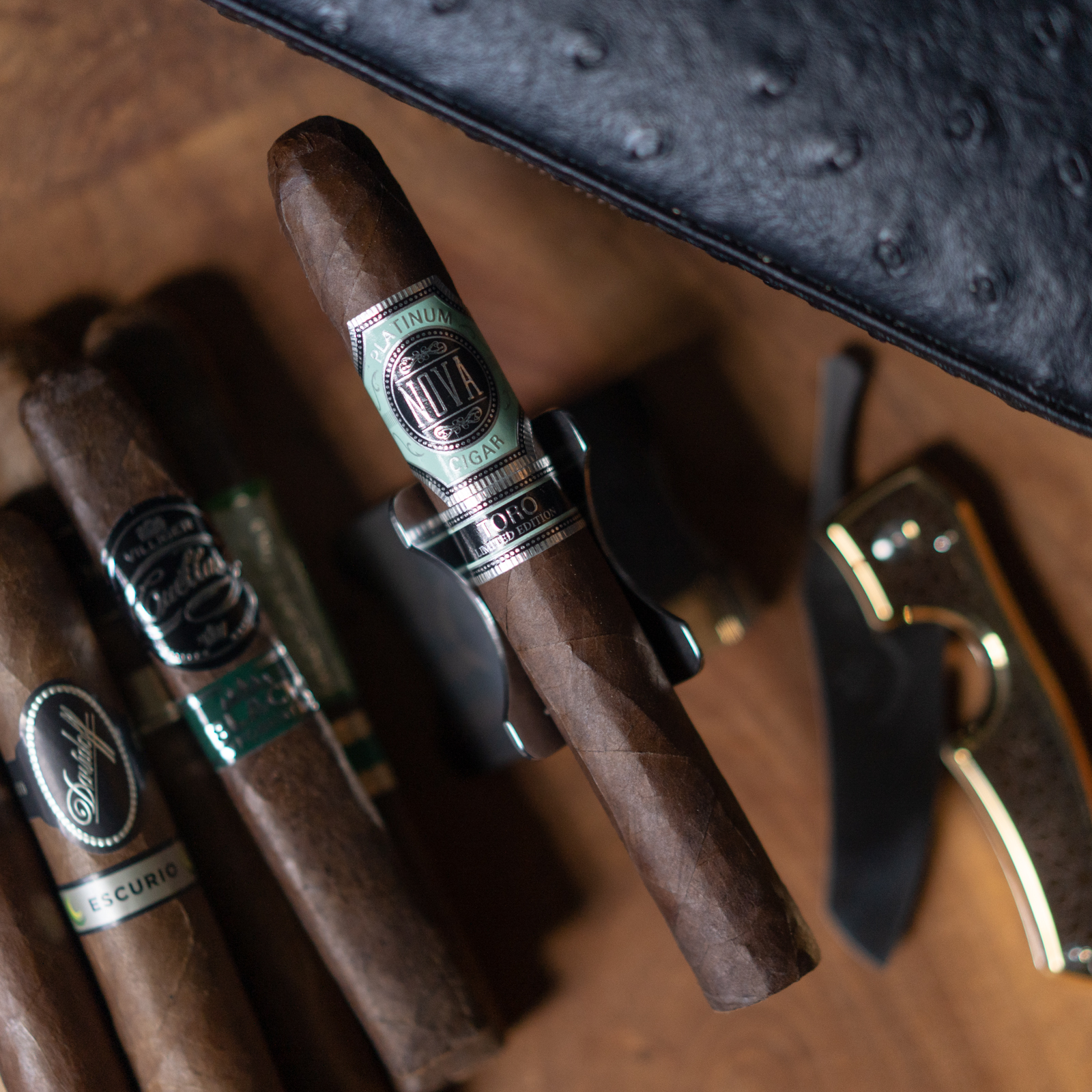 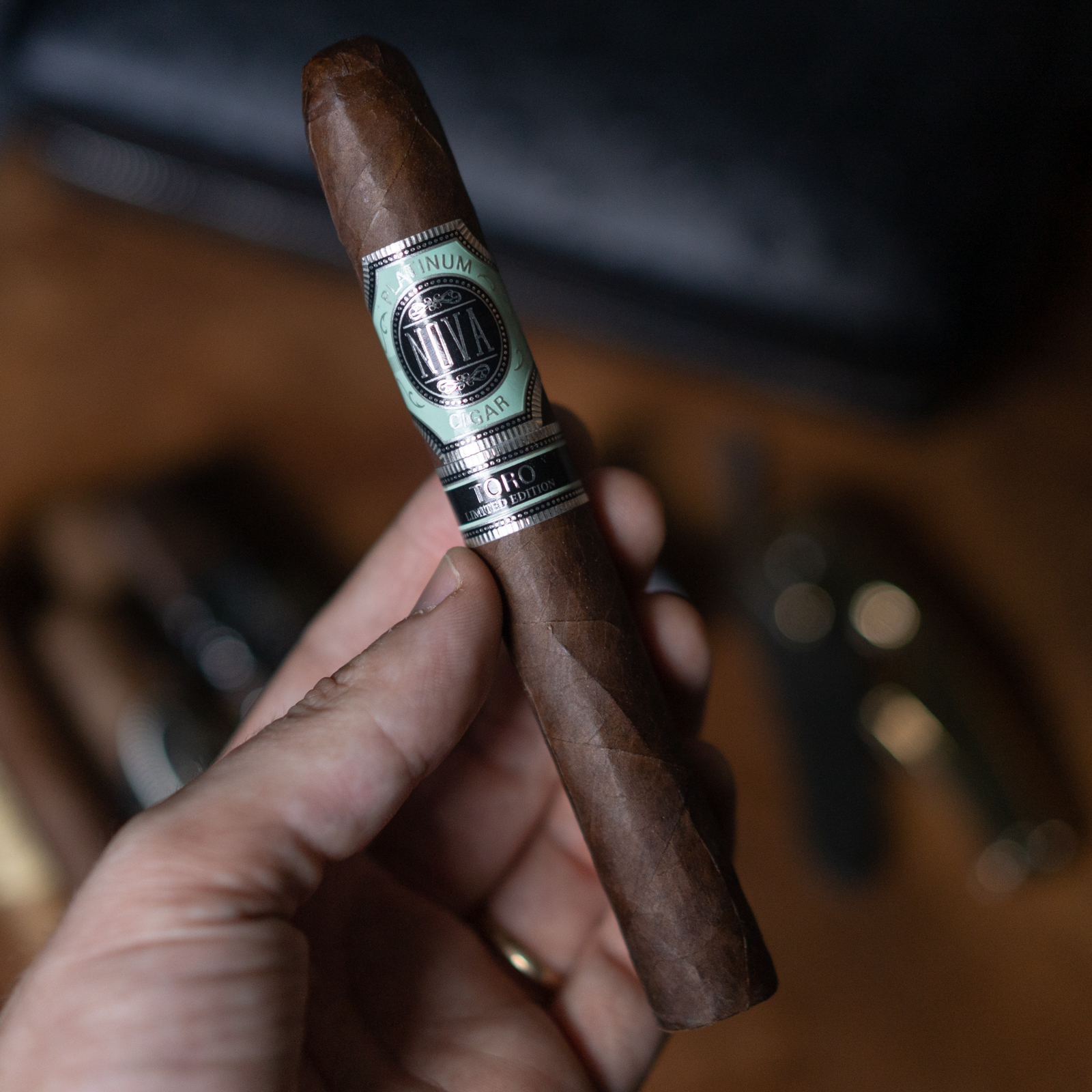 Triple cap maduro wrapper.  Air-tight, seamless construction.  Reeks of chocolate and hay bales.  Its packed fairly well.  A delicate beautiful foot. If you have a foot fetish, forget how this cigar scores at the end, and just go and buy the stick NOW!

The cigar has a tight cold draw.  Very faint bitter spice on the breath.  My lips and tongue actually feel like I just licked hot sauce.  I’m intrigued.

It takes a while for the cigar to toast and light, but it eventually combusts beautifully.

The first third is faint in flavor like the cold draw.  I can barely make out flowers and mesquite.  It has a chili pepper finish. There is almost no smoke production, unless you take deep double puffs. I also find myself having to babysit the smoking heat as a consequence of this.  The cigar gives off a very nostalgic hot chocolate aroma.  After I auger myself a better smoking port by employing my trusty drill bit, the flavors are still hollow. However, I can now taste a very nostalgic nuance- NYC deli coffee in the blue and white Greco-Roman cups! The retrohale is non-existent. 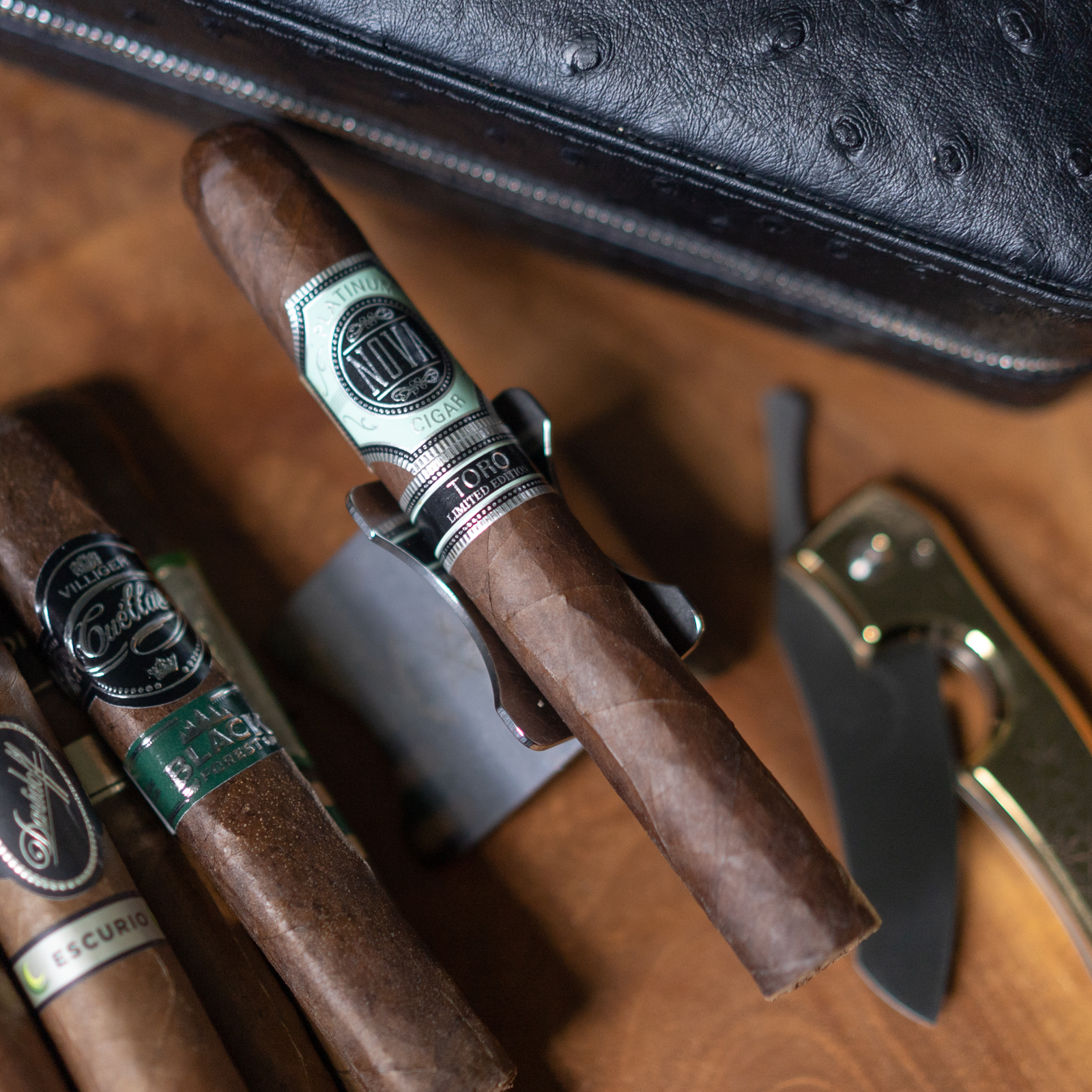 The last third gives off a chocolate habanero aroma.  The retrohale is MIA again.  The cigar is very wood polish forward on the palate with the same chili pepper finish. The cigar gets a little stronger as it dies down with earth, black coffee, and hazelnuts on the tongue. Nothing to write home about. 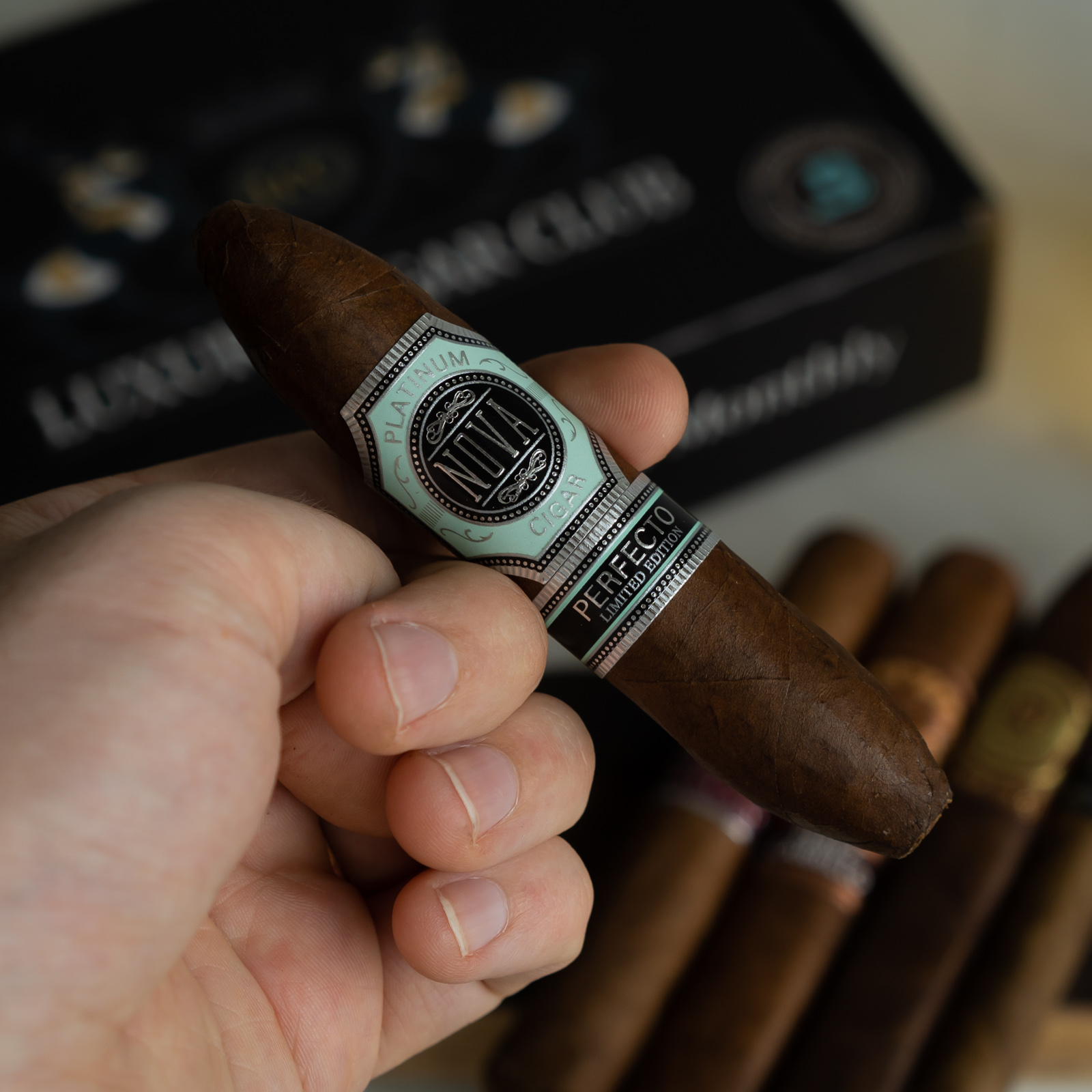 Up for review today is a cigar from one of the few new boutique brands on the market, Nova Cigar company. Thanks to halfwheel’s coverage of IPCPR 2019, you can get a glimpse of the company and some info on the leadership here. But this isn’t a news site, it’s a cigar and spirits review site. So let’s talk about the LE Perfecto.

The cigar features a Nicaraguan Rojiza 2000 wrapper, which I can’t say I know much about, but it is an attractive wrapper. The standout fact about this cigar though is its price tag. At about $25 per cigar, it is priced… let’s say.. aggressively.

Inspecting the Nova Limited Edition Perfecto, it is clear that it is beautifully constructed, and has a very attractive band. I love the combination of silver, black, and Tiffany blue (almost identical). The outer wrapper as well is nice, with a chocolate brown color. The perfecto-shaped cigar is consistently packed over its length, with just a bit of springiness when squeezed.

The outer wrapper leaf smells of barnyard, pepper, and espresso beans, and with the foot adding just a touch of sweet hay. The draw is about a 7/10 in terms of restrictiveness (e.g. just right). Let’s light up.

The Nova Limited Edition Perfecto kicks off with loads of toasty, mild to medium bodied smoke. It produces about an average amount of smoke, and I notice touches of pepper and spice hitting the palate first. I’d say the bulk of the flavor profile is a balance between bitter and sweet notes. On the bitter side: bitter wood, fresh grass, and black espresso. The sweet side is less dominant, with notes of cocoa, cream, and baking spices. Overall, it’s a decently enjoyable opening, but the dominant bitterness does (I think) betray the youth of some of the tobaccos involved.

At about an inch in, some construction issues are becoming evident. First, there seems to be a small hole through the wrapper and binder, leading to air flow issues. Second, maybe as a result of the air flow issues, the cigar has trouble staying lit for more than 20 or so seconds after a puff. Both issues degrade the experience considerably.

The second third of the Nova Limited Edition Perfecto is unfortunately more bad news. Where the flavor profile was at least somewhat balanced in the first third, the second third veers into what I can only describe as bitter blandness. Wet paper, bitter woodiness and sharp spice dominate the experience, with a touch of sweeter baking spices evident on the retrohale.

In the final third, the strength and heat of the smoke pick up considerably. Strength goes up past medium, and the smoke hits the palate hard. There’s not much to say on the flavor side of things – there’s little development save for a hot spiciness which dominates all of the other flavors. Unfortunately, the rapid increase in temperature of the smoke means I set this cigar down early.

The Nova Limited Edition Perfecto is a bit of a head scratcher for me, mainly because the Nova website lists a box of 12 cigars for $300. Given the lackluster flavor, near non-existent complexity, and substantial construction issues, this cigar doesn’t come close to competing with other cigars in that price range. I think a more reasonable price would be $8 – $10.

I realize that sounds harsh, but those are my honest thoughts.

All that being said, I do think the cigar has some promise. I’d probably purchase the Toro size next, let it age for about three months, and then give it another try then.