Perdomo has been in the cigar industry for decades and with this release the Perdomo 10th Anniversary Sun Grown the latest offering is a box pressed cigar with a sun grown wrapper. It is a Nicaraguan puro, but what makes this cigar special is that its wrapper leaf has been aged for ten mouths in bourbon barrels. Barrel aging can add flavors from the spirit the barrel once housed and with bourbon barrels there can be a discernible sweetness added to the cigar.  Smoking blind I could only see that the cigar was a large 60 ring gauge cigar with a box press. I have stated before that I find larger gauge smokes uncomfortable to smoke, but I was pleasantly surprised with not only the flavor characteristics but this cigar’s overall smoking experience.

This cigar has a beautiful milk chocolate box pressed wrapper. The cigar is smooth to the touch with few veins and when I squeeze it there is a fullness of tobacco with no soft spots to be found. It’s quite a large cigar, although the box press makes it appear slightly less sizeable.

With my Xikar scissors I clip a fine straight cut.  The dry draw is chocolatey and woody with a nice sweetness to it. Switching to my Lamborghini torch, I toast the Perdomo Sun Grown and the first puffs are spicy, earthy with full flavored tobacco. The flavors linger a bit in the mouth followed by a creaminess that develops with roasted coffee notes. The retrohale produces chocolate and cedar in the sinus and as it’s released some black pepper comes through. The burn line is wavy but it does not seem to affect the smoke production or the flavors at all.

The cigar develops midway with almonds and milk chocolate on a long sweet finish. At this point the ash is long and firm which attests to the well crafted roll and tobacco blend. That milk chocolate note morphs into cocoa powder and nuts with hints of café au lait. The profile is medium bodied giving a sophistication to the flavors.

Giving another retrohale, oak and hay dominate with a wood finish that spends some time on the palate. The box press gives a nice draw to the cigar which allows a lot of flavors to easily come through.

As the cigar reached its last third it becomes slightly bitter with a shorter finish. There are some fruits, predominately raspberries, along with a nuttiness that comes on strong then quickly fades.  Celery notes and a vegetal component linger on the mouthfeel which is off-putting and the cigar begins to burn a bit hot. Then it settles back in with barnyard and fruits interplaying with less complexities, though still pleasant.

As I give the cigar the last few puffs, the chocolate returns with cedar and finishes on a long and pleasing note. A most enjoyable cigar.

Perdomo has had a long history in the cigar business with many lines and manufacturers.  Some cigars have smoked well while others have been lacking, but Perdomo has remained a vibrant constant in the business. The Perdomo 10th Anniversary Sun Grown delivered chocolate, almonds along with a creaminess that was ever present throughout the medium bodied smoke. Not being a fan of larger gauge cigars I found the box press to be more comfortable in the mouth and the excellent draw let the blend shine in this vitola. If you enjoy thicker cigars or even if don’t you should pick up this smoke. You will be pleasantly surprised with what Perdomo has created here.

In 2020, Perdomo cigars announced their 10th Anniversary line. One of these blends is the 10th Anniversary Maduro, a Nicaraguan puro that dons a six year old wrapper which has been aged for fourteen months in bourbon barrels. In addition, the 10th Anniversary lineup includes Connecticut and Sungrown wrapper blends which will be reviewed later this year. I’ll be interested to smoke them, because smoking this maduro blind was a surprising experience. Read on.

The Perdomo 10th Anniversary Maduro wears a veiny slightly dark box-pressed wrapper with a bit of tooth to it. To the touch the cigar is spongy with a cap that appears slightly off center. The foot of the cigar smells of cedar, sandalwood and leather. The gauge is rather thick and adds to the cigar’s large and weighty appearance.

As I clipp the Perdomo with a straight cut, the cap comes off askew, tearing a bit of the wrapper and leaving a piece hanging. With another slight clip I correct the head of the cigar as best I can. Taking a dry draw produces cold Spanish cedar and some sweetness. I toast the foot of the cigar using my torch lighter and as I take a puff, leather and spice came on full blast like a punch in the face.  This doesn’t last long as the cigar peters out and needs a relight. I gently remove the ash and take another light that ends up bitter, grassy and quite unpleasant. The retrohale tastes of milk chocolate and oak with a short finish when blowing out of the nostrils and mouth.

The burn line on the Perdomo 10th Anniversary Maduro is wavy with a flakey grayish white ash. Once again the cigar goes out and another relight is necessary. What ensues is an airy smoke with cocoa and bitterness. The body is in the medium range with espresso and bakers chocolate on the finish despite needing another relight. I detect dry oak as I relight the cigar as well as that bitter espresso which seems out of balance with the other flavors. Another retrohale delivers black pepper and earth that leaves a tingling sensation as the smoke exits. The more intense flavors, falling short on the palate, seem accentuated when contacting the olfactory receptors.

In the last third yet another relight is needed—extremely frustrating! The cigar’s ability to maintain combustion causes the flavors to become muddled and harsh. As a result, the burn line continues to waver. The last few puffs of leather and earth continue with another short, lackluster finish. An anticlimactic cigar.

For a cigar that was aged in old bourbon barrels I would have expected some more sweetness coming from this smoke. The bourbon barrel influence was rarely noted and I was surprised to receive such harsh treatment. Instead, the Perdomo gave off more bitter notes than anything else. That coupled with constant relights made for a frustrating smoking experience. At its best the Perdomo 10th Anniversary Maduro delivered more pronounced flavors through the retrohale.

I would suggest trying many of the other varieties Perdomo has to offer and skip the 10th Anniversary Maduro. 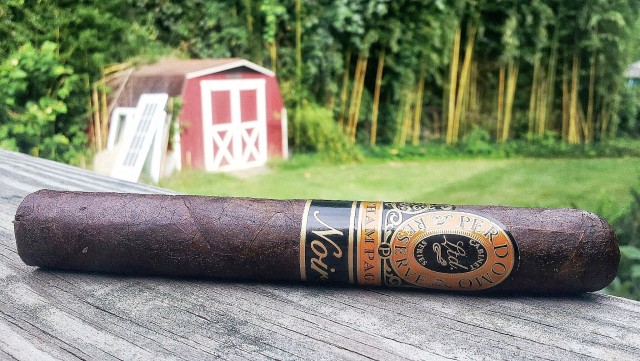 Up for review today is the Perdomo Champagne Noir. As a few have noticed on Instagram, I’ve been on a bit of a Perdomo kick for the past two weeks or so. What can I say? For the money, Perdomo is hard to beat. This stick features many of the same tobaccoes found in the Champagne 10th Anniversary, but with a unique, bourbon-aged Cuban seed maduro wrapper.

Flawless construction. Perfect draw every time, much like my experience with Rocky Patel cigars. The wrapper is a dark chocolate brown with lots of tooth.  Minimal veins and a light oil sheen. The gold and black band pairs very nicely with the color of the wrapper. Off of the foot I get a whiff of cocoa, earth, granola, and a bit of spice.

This cigar starts off with medium body smoke. I’d characterize the texture as somewhat earthy. Off the bat I pick up notes of sweet chocolate, a bit of white pepper, and a bit of a cherry note. About an inch in, the chocolate, cherry, and white pepper notes are dominating, very rich and pleasant. I’m also noticing though that burn issues are going to be a problem as well (see pictures).

Moving through the second third is more of the same profile. I’m glad that I have a bottle of water with me because as rich as this cigar is, it really stimulates salivation a lot, so be sure to have a drink with you for this cigar.

The final third is again more of the same and it ends how it began, which is a bit disappointing considering the profile is so enjoyable. I like to be surprised!

Conclusion
The Champagne Noir from Perdomo is an excellent cigar but it lacks the depth and dynamism that makes a top-tier cigar. I’d certainly keep a few of these in my humidor, but it isn’t a box purchase like the original 10th Anniversary Champagne. 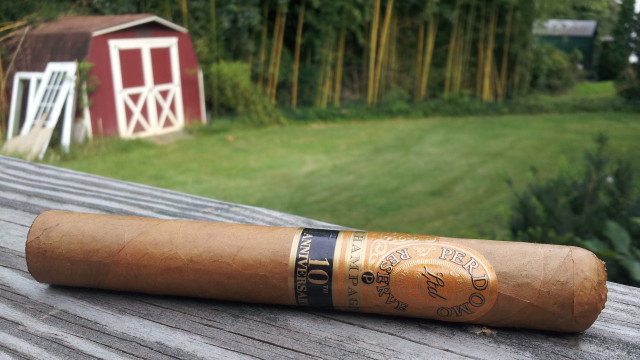 Perdomo is, strangely to me, a brand that I don’t see smoked as often as I’d suspect. I’ve written before on how amazing Perdomo cigars are in terms of quality and value, and I see it proven over and over again. The Perdomo Champagne 10th Anniversary is a great example of this. This stick may strike some as just another Connecticut wrapper cigar among many. Those who smoke the Champagne series know better.

As you’ll see in the review below, the Champagne 10th Anniversary is a truly amazing smoke with surprises around every corner. It’s also a great value at around $7.50 a stick.

The Connecticut wrapper is silky and is complemented well with the orange, gold, and black band. Aesthetically, very well done. Almost zero visible veins on the cigar with salt and pepper ash. On average, the draw is regular to loose and the burn is near perfect.

Off the foot I notice a few notes including nuts, some coffee, and a slight grassiness. The first few puffs dispel any suspicion that this is a normal mild-medium smoke. The cigar produces volumes of thick, very robust smoke. Flavors include black pepper, cream, roasted nuts, and a ton of spice on the retrohale. This is a full-flavored, medium bodied smoke right from the get go.

About an inch in, I’ve noticed the flavors bouncing back and forth between a nice creamy profile to nutty and then off to heavy on the black pepper. The reviewers at Stogies On The Rocks noticed this as well. As you can see in the pictures, the burn remained sharp and straight throughout the smoke.

Into the second third, I notice the body drawing down a bit, with black pepper taking backseat to a nice creamy nuttiness. There’s also a nice sweet grassiness on the nose.

During the final third, the pendulum between the black pepper, nuts, cream, and even a slight cocoa note starts up again, which is fine by me because it keeps the smoke very entertaining and enjoyable. The smoke does heat up a little bit, but it doesn’t stop me from smoking this stick all the way down to the nub.

The Perdomo Champagne is a must smoke. Buy five. Or a box.