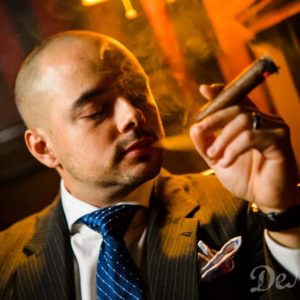 Kelvin Batista is a cigar enthusiast who discovered the marvelous world of cigars over ten years ago and has been captivated ever since. Among other things, he brings a fresh perspective and serendipity to Fine Tobacco NYC, including in depth cigar and cigar related reviews as well as event planning. Kelvin has a passion for bringing people together to promote and preserve connoisseur culture in New York City.

Davidoff has always represented an understated elegance and refinement in the cigar industry.  Their conservative approach to cigar releases, the subtle flavor nuances of their cigars and even the sophisticated decor in their beautiful lounges.  This cigar is no different.  The Davidoff Signature 2000 is one of Davidoff’s best sellers. Consistent with the Davidoff pedigree, this cigar celebrates a long lineage of Davidoff master craftsmanship and expert blending.

As per the ancient ritual, after receiving a package of cigars in the mail, an immediate  and thorough inspection was in order.   Most of the time, I am well aware of which cigars to expect.  However, this particular package had the original bands detached to remove some partiality from the review process.  Heavy biases and crude judgments aside, by removing the band as barbaric as it may seem, lessens the distractions and focuses attention on the contents of the book and less on its cover.

It was late in the evening, the Davidoff Signature 2000 with its graceful poise caught my eye.  It’s unpretentious vitola, tight flawless bronzed Ecuadorian wrapper and triple cap flair made a great impression.  The wrapper and its construction was just about perfect, with no visible veins or lumps, and a soft sandalwood luster.

Taking a smell of the foot of the Davidoff Signature 2000, tantalizing aroma of walnuts, dry leaves and fresh Costa Rican coffee greet the nose.  After a straight cut, a dry pull reveals vegetal and fresh grass on the palate.  Soft dry hay and white pepper flavors wrapped in thick and creamy combination provide a luscious well balanced medium body.  Once the heat settles, the ash starts to build and a comforting sharp burn reveals itself.

The retrohale (gateway to the next dimension of cigar appreciation) is a soft delicate floral twang reminiscent of finely aged Cuban seed tobacco takes this cigar to the next level.  Careful throttling of the pull is consistent with most cigars where spice picks up with heat and a leveling off once the heart dissipates.

In the second third of the Davidoff Signature 2000, the white pepper softens up, soft velvet texture, cedar, razor sharp burn, no relights. By the middle of the cigar, the flavors have settled quite nicely.  I am able to throttle the intensity of the retrohale by manipulating the frequency and strength of the draw.  This wave of flavors is what takes this cigar to the next level. It’s enticing, provocative and mysterious.

As the cigar gets near the end, the heat picks up and so does the intensity of flavors, the white pepper gets stronger, the dry hay makes a sneaky return, the retrohale boldens. Noticeable white ash and no relights.  If one was to ease off a bit and feather the draw, graham crackers and vegetal lingers in the background.

A fine example of great tobacco, years of experience and mastery to create a mild mannered masterpiece. I suspect this cigar will age gracefully, This cigar being readily available, will allow anyone to find and experience what in my opinion is a great cigar.  It’s not overpowering, bold or pretentious.  Instead, the Davidoff Signature 2000 is refined, balanced and well tempered (medium strength), The true magic of this cigar is behind the curtains or more accurately hidden behind the retrohale.  A true gem in the Davidoff lineup.

It is a great time to be alive if you’re a cigar smoker.  Today, we have some of the best, most consistent and interesting blends of cigars available to us with a click of a button.  Although some cigar manufacturers boast about their blend specifics with detail, many do not.  Cigar Brands might choose to do this to preserve family secrets and protect blending techniques.  In any case, we often refer to hearsay for information and our taste buds for judgment. Such is the case with the following cigar, the mysterious My Father S Special.

Sometime around 2011 appeared a cigar from My Father rumored to be a direct descendant of the noble Centurion line which was first blended half a dozen years prior.  This cigar was only available to a limited few and in finite quantities.  Almost 6 years later from the deeply entrenched corners of the humidor it awakens it from its six year slumber.

While this cigar has been living in a humidor for 6 years it is still new to me.  Its heritage suggests it is not a cigar to be taken lightly.  The wrapper appears rugged.  It’s satin sheen, lumpy and toothy texture confirm this.  The triple cap suggests a quality roll and with its robusto vitola it completes a short, stocky, well-made cigar that’s a little rough around the edges.

The cigar lights up without hesitation. From experience, I let the cigar slowly come to life and I’ll occasionally blow out the stale air from the cigar.   I refrain from making quick judgement as a I allow it to softly pick up heat.  First third, I taste light cedar, dry white pepper and a little ash.  Nothing overpowering but enough to hinder the spirits.  Interestingly enough, the retro hale was better with dominant toast notes.

I was well into the second third when the ash finally fell.  The cigars burned flawlessly, the burn was even and crisp throughout the experience.  The harsh cedar flavors shifted to toasted bread and the cigar started to balance out a bit.  The retro-hale mellowed out and I enjoyably appreciated a bit of twang and floral.

By the last third, the cigar flavors mellowed out even more.  Nonetheless, the heat and spice and vegetal notes lingered in the background.

Overall, a cigar that I admittedly over hyped to myself.  I think it was long overdue to be smoked.  Perhaps a couple of years ago the cigar was in its prime but nevertheless, the years added complexity, maturity and much respect, reminiscent of Hemingway’s struggling fisherman. 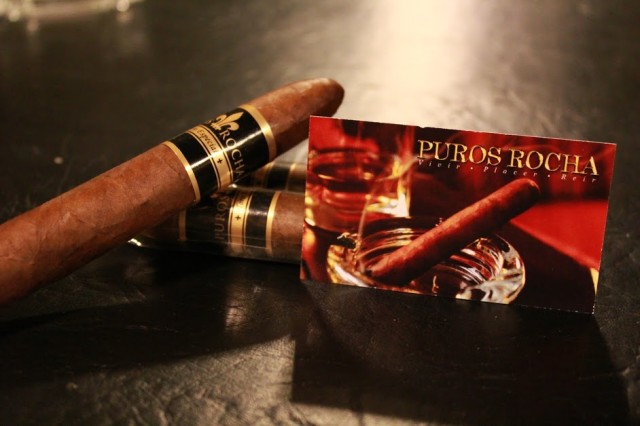 One of the things I love about living in New York City and the underground cigar scene is you never know who you will meet or what you will discover next. Such was the case about a year ago at a NYC cigar lounge where I was introduced to Alejandro Rocha, president of Puros Rocha. We exchanged numbers and met some time later where he promised me some sticks for me to try from his micro brand he has been working on for the last couple of years. Here is my review of his labor of love. 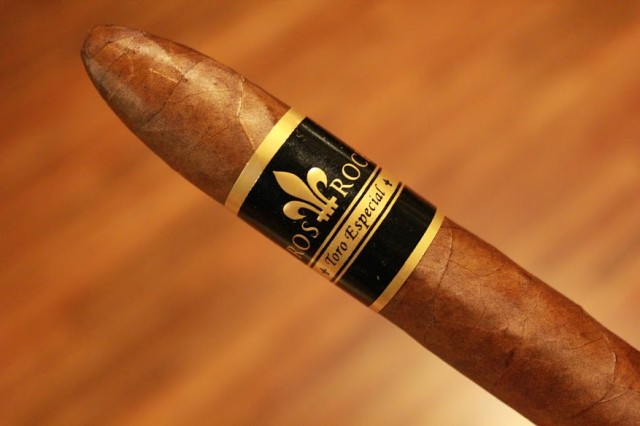 At first appearance Lovely habano wrapper is even in color throughout all the sticks I’ve seen. In addition, there are no harsh veins the cigar has a even satin sheen with minimal tooth yet somewhat lumpy. A perfect V-cut brings out a perfect draw.

First Third: Tons of smoke with every draw. Oak wood, raw peanut and just the right amount of paprika pepper coats the palate. The Puros Rocha is a well balanced full body, medium/full flavor and medium strength. As I advance, there is an increasingly earthy musk that works well in conjunction with the spice.

Second Third: The ash fell right on second third mark. A light pleasing retrohale adds to the experience. By this time, the earthy/must lightens up and black pepper lingers for a long finish as the cigar continues its complex sequence.

Last Third: As the heat picks up, the flavors intensifies. The shift in temperature kicks it up a notch but never becoming deviant or transcending far from it original flavors.

There are many cigars that never see the inside of a cigar shop humidor. Fortunately, this cigar represents the strength and ruggedness of the NYC underground cigar scene and I foresee this cigar brand will keep growing–soon to be available at a shop near you. Long ashes!

When asked what is my favorite cigar vitola, I usually answer with belicoso. Coming in at 5 ½ x 52-54 this vitola is the same length as a corona but thicker, very similar to a torpedo but without a pointy tip and technically a figurado.

La Duena means female owner and this cigar was blended in part by Janny Garcia daughter of Cigar superstar Don Pepin in conjunction with Pete Johnson (Tatuaje Cigars). For her cigar blending debut Janny chose an interesting marriage of Connecticut Broadleaf wrapper and Connecticut and Nicaraguan Binder and filler. Her brother Jaime Garcia handles production and in like fashion, La Duena joins the My Father family of cigars.

I use a straight cut, and the pre-light test has a perfect draw which tastes peppery at the tip of the tongue. Rich Nicaraguan tobacco aroma at the foot of the cigar.

This cigar opens with dry cedar taste at the first draw, earthy,musty, sulfur and it progressively gets spicier. Chili Pepper sneaks in and overtakes the palate. At about halfway, flavors are settling with a medium body, rich woody retrohale. I can tell this cigar has a white and razor sharp burn, with ash falling right on the second third mark

By the second third all the flavors come together in harmony. It balances very well with a buttery texture and every taste mentioned in the first still dancing around beautifully. The body becomes richer, with flavor and strength lingering around medium and full for a long finish.

In the final third, the sulfur flavor picks up. Although its not a flavor I enjoy, my cigar burns excellent, which is a sign of good tobacco and great construction. Pepper taste still hanging around but be careful not to pull too hard or the pesky sulfur reveals itself.

Janny’s efforts did not go unnoticed in her debut as a blender even if she did get a little help from Pete Johnson. This cigar is complex with flavors that work together in a package to deliver a tasty treat. My favorite is the second half by far where the flavors mend and flow well. I hope this cigar will be a stepping stone for Janny Garcia and I expect many good things to come in the future from her especially having the bloodline for producing some excellent sticks. Cheers to the future!