The American cigar community continues its revolt against the FDA’s overreaching regulations. Michael Felberbaum explains for the Associated Press today what the regulations will likely look like:

“If it’s anything like the FDA’s regulation of cigarettes and smokeless tobacco, that could mean banning certain flavors, requiring new health warnings, limiting the sizes and shapes of cigars, or imposing restrictions for marketing, advertising and retail sales. Cigars also may be restricted from being sold separately and the agency also could limit the amount of nicotine in the products.”

He goes on to describe the effect on the cigar industry in the United States.

“The premium cigar industry argues any number of the potential restrictions could hurt both cigar makers and specialty tobacco stores, whose products make up only a small fraction of tobacco sales, don’t pose the same concerns as cigarettes, and the range of sizes and shapes of cigars makes across-the-board standards almost impossible.”

“Cass and Spann have joined with others in the cigar industry to seek a change in Congress to protect premium hand-rolled cigars from FDA regulation and save 85,000 small business jobs around the country. Resolutions in both the House and the Senate remain in committee.

Stay updated on the fight for cigar rights here.

Here at FineTobaccoNYC, we’re always meeting new cigar lovers, and every once in a while we meet someone so passionate about cigars that we have to ask them to come on board with us to help promote this truly incredible passion that we share. I first met Ronnie Parisella at a cigar event out in Brooklyn and enjoyed conversing with him about New York tobacco politics and our favorite cigars. Ronnie is a representative for Cigar Rights of America, and Kelvin, Dave, James, Tim and I are glad to have him on board as a contributing writer. His knowledge of the culture, art, and politics of cigars is really impressive.

After more good conversation and shared vision, Ronnie expressed interest in writing for the site. So, look forward to seeing valuable articles from him this week and beyond.

As you can tell from his professional biography below, Ronnie is a talented businessman and a passionate cigar aficionado. Welcome to the team Ronnie!

Ronnie Parisella joined Power Consulting Group as the Director of Information Technology in January 2011. Power Consulting Group is an IT consulting and managed services firm founded in 1992 Based in NYC and specializing in Managed Services, Network Security and Disaster Recovery Planning for the educational and financial verticals. Power Consulting also helps its clients with federal regulatory work like HIPAA and PCI compliancy. In his role as Director of Information Technology, Mr. Parisella works with many IT industry leading companies, including Microsoft, SonicWALL, Symantec, Dell, Ingram Micro, VMWare and Hewlett Packard.

In his previous role as Chief Technology Officer and Co-Founder of Primary Support Solutions, Mr. Parisella was responsible for the technology recommendations of such high-profile clients as Burberry, Forbes.com, The Galleon Group, National Financial Partners and Cerebus Capital Management.

Prior to founding Primary Support, Mr. Parisella was the Director of Information Technology for the New York New Media Association (NYNMA) (2000-2002). In this role, Mr. Parisella worked closely with entrepreneurs and technology leaders. At its peak, NYNMA boasted membership of over 9,000 of New York’s IT Investment community (C-Level executives, venture capitalists, angel investor and startups).

Mr. Parisella served as the Information Technology Project Manager for Scholastic Books (1998-2000). In this role he led Scholastic’s successful Y2K rollout (2,500 desktops in four months) including the design, management and implementation of the project. He also designed their Windows 2000 rollout. Mr. Parisella specialized in designing and integrating workflow procedures for Scholastic’s high-level deployment scenarios.

Prior to 1998, Mr. Parisella consulted for many industry-leading companies including Charles Schwab, MTV Networks, McGraw-Hill Companies and Philip Morris.

Mr. Parisella was recently highlighted as a top Information Technology Entrepreneur and as a leading CTO under age 40 by VAR Business Magazine. His work as a technology leader has led to him being a frequent commentator on IT best practices for small and mid-sized businesses.

In the community, Mr. Parisella is an Ingram Micro SMB Alliance Advisory Council Member, leads the the NYC Tri-State Area User Group for Autotask, and participates in many vendor-led initiatives.

Additionally, Mr. Parisella was appointed the chairman of the New York Chapter of the Cigar Rights of America more commonly known as the “CRA.” “Cigar Rights of America was founded on the principle of fighting for the freedom to enjoy cigars. CRA is a consumer-based, non-profit public advocacy organization that works with local, state and federal governments to protect the freedoms of cigar enthusiasts”

A few days after smoking my first Cremo cigar, I received an email from President of Cremo Cigars, Walter Santiago, thanking me for taking the time to review his cigars. Our review of the Cremo will be out later this week, so stay tuned. He also let me know that Cremo is running a give-away for a box of free Cremo cigars. Details are below!

The weather is getting nice and people are lighting up cigars, which means one thing: CONTEST TIME!  Here at Crémo Premium Cigars we know that summer is coming and you can enjoy more cigars out on your deck, in your favorite lounge, or at home in a comfortable chair. The only thing missing is a  Crémo. Great day, great place, so you need a great cigar.   We have a goal of 1,000 “likes” on our Facebook page. To get there we are holding a contest for the first 1,000 people that like our page.

Once we hit the 1,000 mark, we will draw from that crowd and they will win a FREE BOX!

The sooner we get to 1,000, the sooner we can get that box out to you.  If you’re the lucky winner, you not only get a box of cigars, you also get to choose which size you want! So, if you like Robustos, the Excelsior is coming your way. Toro more your size? Intrepidus will be in the mail. More traditional size? Then our Corona Gorda, Magnum Opus, will be shipped to you. Whichever size you prefer, you are sure to enjoy these fine cigars.

We hope to see you on our fanpage as well as enjoying a Crémo. 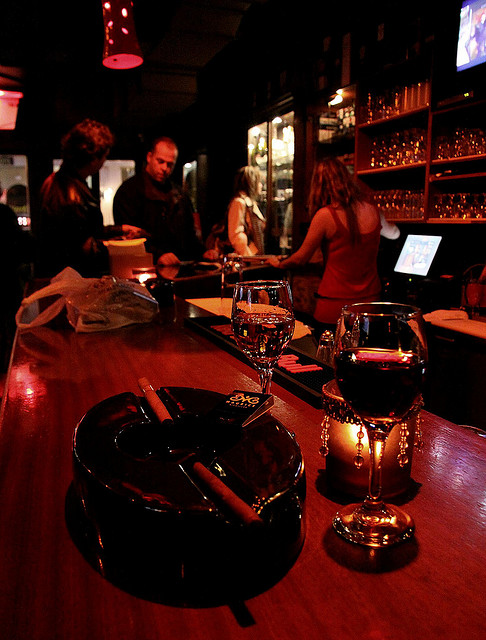 At this event, Alec Bradley cigars will debut their new box pressed Maduro, so it isn’t one to miss. The event is also special as it is the first FineTobaccoNYC event at Havana Dreams, which is perhaps the oldest cigar lounge in Queens — at least, it seems reasonable to assume that considering they are still able to serve wine to their patrons. This presents guests with the opportunity to experience a rare piece of New York City history, all while enjoying cigars and a glass of wine.

We’re looking forward to having a good group of friend at the event, so if you want to experience a location that many smokers are unaware of, or just want to come make new friends, follow the link below to RSVP. Here are the event details:

Click here to RSVP for the event or email matthias.ftnyc(at)gmail.com!

Looking forward to seeing you all there. Until then, long ashes.

Have a bottle of something good that you just haven’t cracked open yet? Or, another bottle that’s already opened that needs a bit of help? “Open That Bottle Night” was started in 2000 by Dorothy J. Gaiter and John Brecher of the Wall St. Journal. Since then, the event has gained popularity in the wine and spirits world – now it is just waiting to be popularized in the cigar world!

Join your friends with FTNYC and Refugio Cigar House this Saturday from 6:00pm – 1:00am for a great “Sip & Smoke” Rum and Cigar pairing with lots of specials.

The event will feature:

– No cutting/BYO fee
– Refugio Cigar House is raffling off one of their new membership boxes! The membership humidor is good for one year – a huge value.
– Cigar raffles
– Sip & Smoke talk on the art of pairing Rum & Cigars.

The event is free and open to all lovers of the leaf and for everyone who loves a good sip!