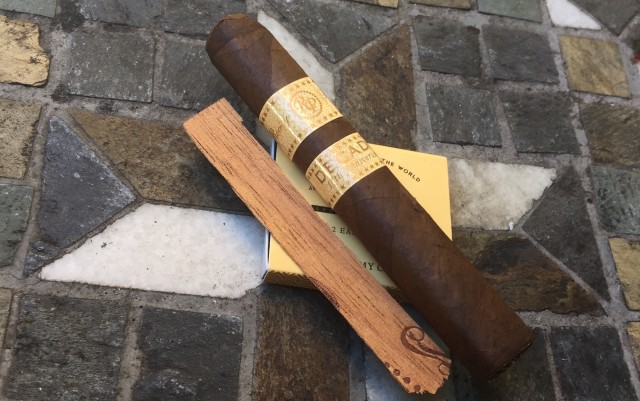 Rocky Patel has always been a favorite of mine: so much so that there was a time when I would smoke his Vintage 1990 cigars almost exclusively. But, as any aficionado will tell you, not all cigars are created equal, and even different types of the same cigar can be quite different from one another. As such, I’ll be revisiting the Decade, one of Rocky’s most prolific creations. Our founder Matthias Clock reviewed the Decade Toro almost three years ago. Today, I’ll be tackling the Robusto vitola. Now I know what you’re all thinking: why revisit this particular cigar? Because this is a cigar worth examining more closely: it boasts a whoppin’ 95 rating in Cigar Aficionado magazine, and it’s also a personal favorite of yours truly. However, I’ve also experienced inconsistencies with this blend in the past, which means the case isn’t closed just yet…

The Decade Robusto is quite a sight to behold. Its dark, rough Ecuadorian Sumatra wrapper contrasts perfectly with the regal beige-gold label. I haven’t even held it in my hand, and I’m already impatient to smoke it! While the wrapper looks rough and has no peach fuzz, it’s still remarkably smooth. The meticulously box-pressed body is firm without being rigid and boasts no noticeable soft spots: two very good signs that any serious smoker should always seek in a cigar. The cold odors consists mainly of oak and leather with a hint of spice so strong that it burns the nostril if you’re not careful. The foot boasts a more chocolate-centric aroma, again with a sneakily strong hint of spice just below the surface. 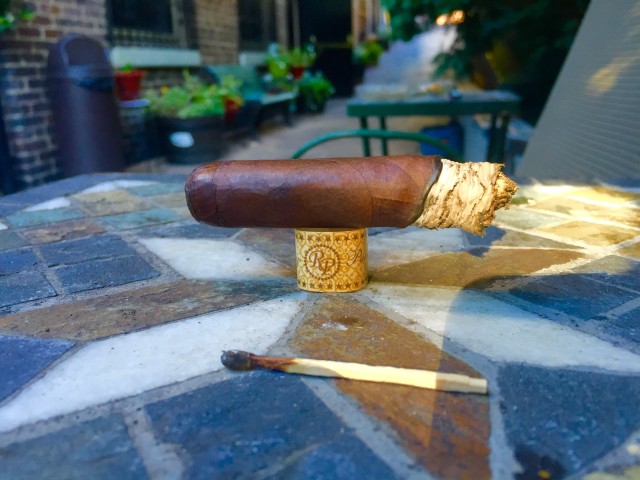 First Third: A great journey begins on the heels of a finely balanced draw. The first few puffs bring forth a harsh and bitter dark wood that leave the palate in the form of excellently thick and lush smoke clouds. A wholesome helping of bread is prominent in foreground, along with the wood. As the white-gray ash continues to hold its form near-perfectly and the burn remains consistently even, the spice present in the cold odors comes into the mix and melds with the wood, maturing it. The flavor profile’s middle ground and background have gradually crystalized in the mean time, the middle ground sporting a constant, delicious dark chocolate essence, while a tart element of sugar takes the background. The bread recedes some from the foreground as the first third nears its end, at which point the Decade develops a rich chocolate and wood aftertaste that smoothly wraps itself around the palate like silk on the skin.

Second Third: The second third is a somewhat purgatorial stage for the Decade Robusto. The near-perfect draw begins to tighten. The ash falls off suddenly and unexpectedly. What’s more, the burn begins canoeing, though fortunately it never fully does, limping along as it fluctuates. Meanwhile, the tart sugar note in the background intensifies. The wood flavor in the foreground again matures and becomes more toasty. However, it also becomes more bitter, concentrating and taking over the foreground, forcing the bread out. The ever-present spice in the middle ground intensifies as well, to the point where it touches the tongue. The burn finally begins evening out, signaling the end of the purgatorial second third. 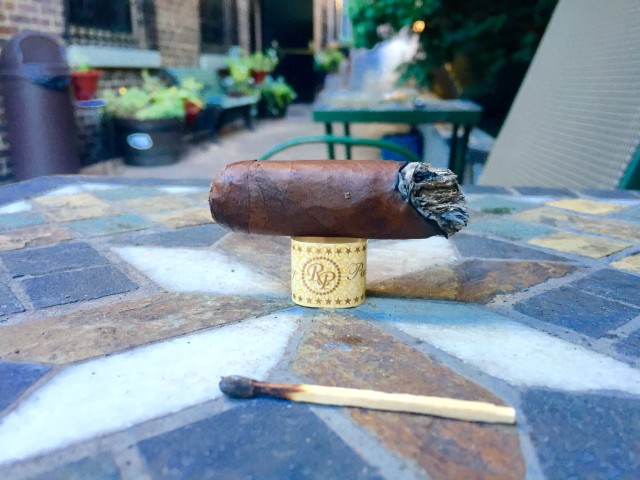 Final Third: And now that we’ve cleared Purgatorio, it’s time to experience Paradiso. The bitterness in the wood at the forefront recedes, allowing for the wood to be enjoyed more easily before it too eventually recedes to make way for the dark chocolate, which soon replaces the bitter essences entirely. Advancing to the front from the middle ground, the dark chocolate expands and shares the foreground with the rich, toasty wood. This particular transition coincides with an emergent leathery texture on the draw, which loosens back up, further enriching the cigar. While the burn is still a bit uneven, the spice at the nub is greatly diminished. The Decade Robusto finishes out strong on the heels of a sweet, dark chocolate and wood flavor profile with a rich, leathery draw.

I wanted a solid performance, and that’s exactly what I got! Experience tells me the best way to have a Decade is to have it box-pressed, hence my choice of this particular vitola. Not only does it deliver a rock-solid smoke with an excellent flavor profile and draw, it also does so in an efficient amount of time. In conclusion, I think I’ve found my new favorite vitola for one of my top five favorite cigars! 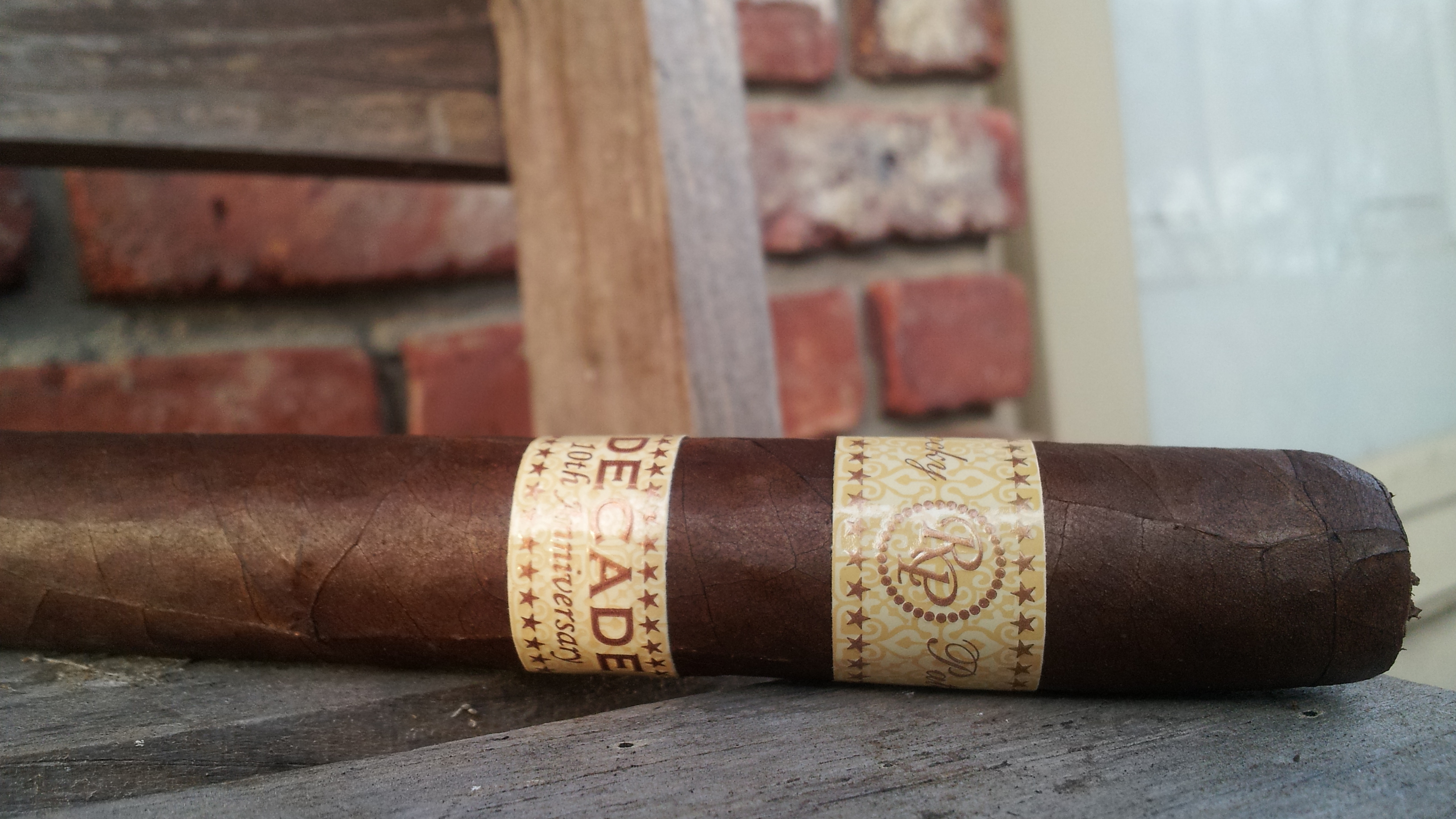