Cigar maker Rocky Patel has a truly vast array of cigar lines which would be too numerous to list here. One of his more creative incarnations is the Rocky Patel Cigar Smoking World Championship. As part of the annual Cigar Smoking World championship events (held around the world and with a Grand Finale in Croatia) the competitors smoke a cigar as “slowly” as possible without the ash falling or the cigar going out. Although this smoke is not the official size of the competition, the blend is the same and if you wish to challenge yourself you can see how slowly you can smoke this blend.

Having smoked this blind I puffed away at what I deemed an appropriate pace for this robusto and even though it wasn’t a marathon cigar session it was an enjoyable one as you’ll see below.

The Rocky Patel Cigar Smoking World Championship robusto’s dark maduro wrapper is firm to the touch. There are several veins and the roll seems a bit off in hand. The foot smells of barnyard, hay and earth.

Using my Xikar V I clip a razor sharp straight cut and take a cold draw. It’s firm, and I pick up raisins and plum. With a quick torch light the Rocky Patel Cigar Smoking World Championship robusto bursts forward with smoke full of tobacco and spice on the tongue. What follows are notes of graham cracker and sourdough. In addition, I pick up some cocoa and rasinated flavor that hits my sinuses on the retrohale.

As the cigar progresses, the burn line is razor sharp with a grayish ash. The profile retains a medium to full body with earth and chocolate notes on the palate.  A sweeter side to the Rocky Patel Cigar Smoking World Championship emerges along with some floral flavors that last only a short time. With another retrohale I pick up raisin, spice and grain. The ash seems to hold on rather well at this point and there is ample smoke from the cigar.

The transition to the last third of the Rocky Patel Cigar Smoking World Championship robusto is that of roasted nuts and a dark chocolate finish. A bit of hay and cinnamon carries the smoke to a more medium style with a lighter spice than earlier. The burn continues to be excellent and while the hay is initially pronounced, some barnyard and damp flavors emerge that feel a bit disjointed from the current profile.

With the final puffs, flavors of peanuts, citrus and spice round out the smoke to a pleasing long finish.

I can’t say I’ve taken part in a marathon smoking contest (nor do I know if I want to), but whether you smoke this as a challenge or as a casual smoke the blend is very enjoyable. The full flavors of spice that the cigar starts with transitioned to earthy and chocolate notes throughout. The construction and burn line was excellent and the evolution to citrus and nuts on the last third rounded out the profile. 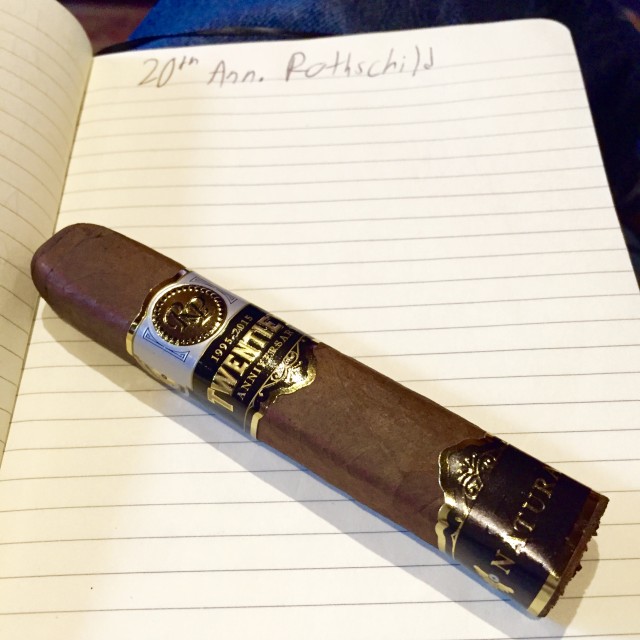 Rakesh “Rocky” Patel sold his Hollywood legal practice in the early 1990s, the dawn of the Cigar Boom, and moved to Honduras to learn the art of cigar production. Patel strove for one simple thing: Perfection. His company, initially dubbed Indian Tabac, was launched in 1995. Twenty years later, Patel and his company (renamed Rocky Patel Premium Cigars in 2002) have not only survived the malaise and inevitable fallout of the Boom (a claim very few can make), they have established a empire that competes with fellow tobacco giants Arturo Fuente and Padròn in the world-wide tobacco world. In accordance with his tradition of creating cigars to commemorate key points in his company’s history, Rocky Patel proudly released a special 20th Anniversary cigar to celebrate 20 years in the industry. Today, I’ll be reviewing the Rosthchild vitola; I’d be lying through my teeth if I said I wasn’t particularly excited about this boxed pressed little beauty!

The Twentieth Anniversary has a great aesthetic appeal to it, even by Rocky Patel standards. This is an impressive feat that must be noted, given Rocky’s chosen method of making cigars that are aesthetically eye-catching. The stick’s box pressing is nearly perfect; the dark Honduran wrapper looks smooth and sultry, the veins are subtle and the seams are practically invisible, sealed absolutely perfectly with no openings to be seen; the only soft spot I can feel is barely even a soft spot; similarly, the nub boasts a perfectly sealed double cap that shows no breaches once cut. The wrapper is silky smooth to the touch, as well, boasting rich earthy notes. The foot reveals a subtle coffee essence, as well as chocolate. In conclusion, let’s quite stalling and get on with the smoke! 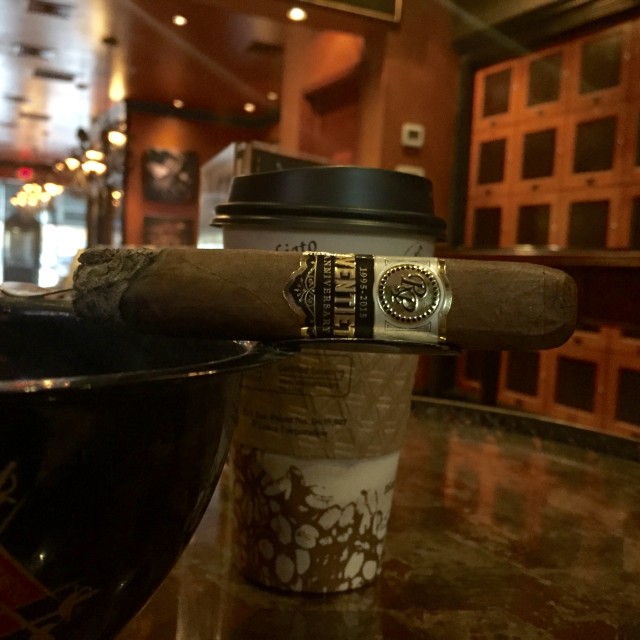 First Third: The 20th Anniversary gets right on down to business with a perfect draw that will ultimately last from the first puff to the last. The first finely drawn puffs yield a strong, raw coffee essence, tempered somewhat by an undertone of chocolate. The retrohale is dominated by an even more raw (and therefore more rich) dark wood flavor. The burn is slightly uneven, a slight chink in the armor that sadly persists throughout the first third and into the second, the stick waging an uphill struggle to even itself out. The ash is a very dark grey; though it bends and fractures some, it holds surprisingly well. After the foot is cleared the puffs develop an unusually thick and dark chocolatey texture and aftertaste that coats the palate. Not a bad start!

Second Third: The second third begins on the heals of a slight charcoal undertone entering the background alongside the chocolate. Meanwhile in the foreground, the coffee intensifies the smoke when it metastasizes into a dark wood flavor. The rertrohale’s dark wood is concurrently enhanced by a note of sugar. Halfway through, the burn finally evens out while the ash continues to hold firm. Then, right out of left field, an independent raw coffee note returns to the foreground and vies for control with the dark wood. 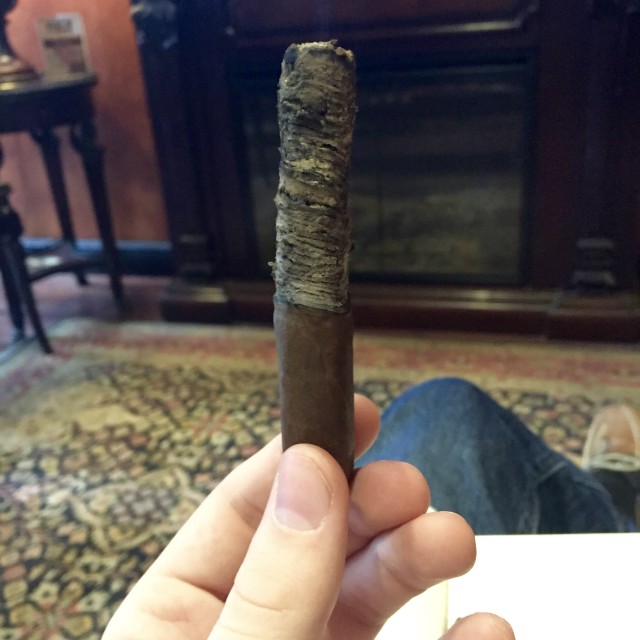 Final Third: Here, after the ash finally falls for the first time, everything comes full circle in a fantastically unique way. The dark wood and raw coffee draw a truce and combine with each other, creating a rich and earthy hybrid note in the foreground. The coffee in the background stays as is, providing support for the foreground. This harmonic convergence of flavors and textures marks the 20th’s final delicious puffs.

Now that’s quite a lot going on for such a small stick! Every puff was, in one form or another, a fistful of powerfully rich and earthy essences that constitute both the 20th’s greatest strength and greatest weakness: every puff skirted the line of overpowering the palate, which, when counted with the occasional troubles with the burn, ultimately keeps the 20th from getting an A+ in my view. At the same time, it should also be noted that the draw did not fluctuate even once; as any experienced blender will tell you, this can be a might difficult feat to accomplish. As such, the 20th Anniversary Rothschild not only upholds the Rocky Patel legacy, it takes it to new heights!

Rocky Patel is once again on to a new blend: the 2/26. RP is, of course, a brand that has gotten a lot of hate in recent years from cigar smokers for releasing “too many blends” – the problem with this obviously being that so many of their blends are so damn good. Recent releases like the Freedom delivered massively on taste and construction quality, so I don’t hesitate to say I’m excited to try the 2/26.

March 22, 2013 — To celebrate Rocky’s birthday on 2/26 we have released one of Rocky’s favorite personal blends from our factory in Estelí, Nicaragua. The II-XXVI (2-26) are packed in beautiful handcrafted wood with a piano finish. The II-XXVI is limited, so there are only 1,000 boxes available in each size. 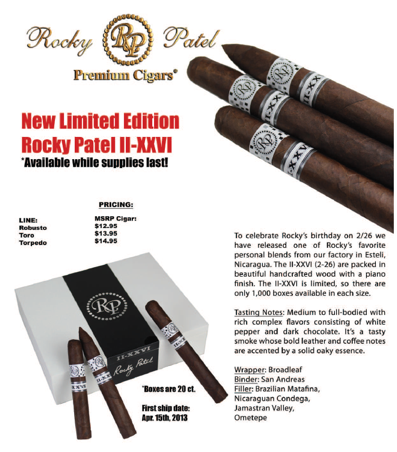 Tasting Notes: medium to full-bodied with rich complex flavors consisting of white pepper and dark chocolate. It’s a tasty smoke whose bold leather and coffee notes are accented by a solid oaky essence.