Christian offers a perspective of cigars ranging from vintage pre-embargo smokes, hard to find cigars as well as current releases. His 22+ years of smoking and love of travel have taken him on cigar journeys here and abroad. From smoking HERF’s in friends backyards to smoking Montecristo No. 2s on the terrace of the Hungarian Palace Hotel in Lido Italy, Christian takes the “everyman” approach to cigar smoking being it all about taste and enjoyment of where you are or who you are with. 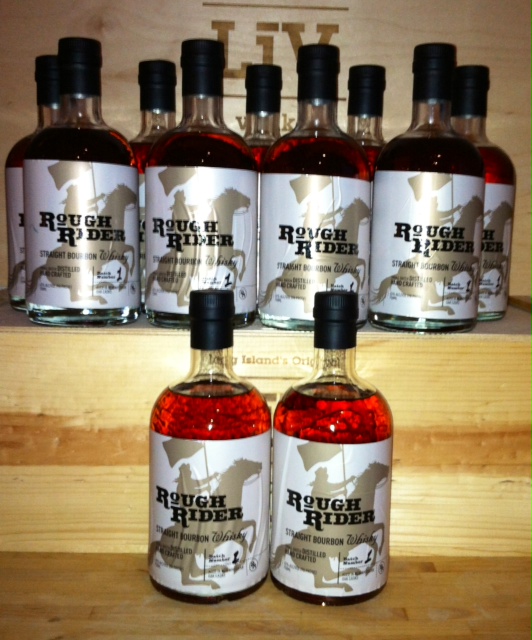 For all you Bourbon fans out there Long Island Spirits Distillers has created a Bourbon that gives a nod to the spirit of former President and L.I. resident Theodore Roosevelt and his band of Rough Riders. Rough Rider Straight Bourbon is the latest creation from the company with its release of their Small Batch No.1.  Long Island Spirits which is best known for LiV Vodka began their foray into the darker spirits with their award winning Pine Barrens Single Malt Whisky. There is also a Brandy out there that is extremely limited which I’m hoping to provide more info on in the future. All of these are small batch and adhere to the highest quality standards. Here is some info from Long Island Spirits with my review to follow:

Teddy Roosevelt, a native Long Islander, organized the United States First Voluntary Cavalry, commonly known as the Rough Riders, in 1898. Composed of 2,350 men from across the country, including cowboys, Native Americans and other Wild West types, as well as Ivy League athletes and aristocratic sportsmen from the East.

This disparate group shared a common purpose: the pursuit of adventure, independence and excellence. Despite winning the Battle of San Juan hill, the Rough Riders disbanded on Montauk Point after only 137 days of service.

Rough Rider Straight Bourbon Batch #1 is inspired by the uncommon virtues of those men.

Each limited batch of Rough Rider Straight Bourbon is meticulously handcrafted at a distillery just miles from where the Roosevelt’s Rough Riders departed, in Montauk Long Island. The whiskey is a high-rye, straight bourbon that starts out as a highly refined mash bill, consisting of 60% corn, 35% rye, and 5% malted barley, and is then aged for several years in charred new American white oak barrels.

Rough Rider is then finished in hand selected American oak barrels, which once held some of Long Island’s finest wines. The wine casks that are selected for the second maturation, described by Long Island Spirits owner Richard Stabile as its exclusive method of “Reserve Aged,” are chosen from the finest wineries on Long Island and are an exquisite balanced blend of award winning Merlot and Chardonnay barrels.

These casks undergo a “cask finishing wash”, with a very unique 180-proof brandy distilled from local Long Island Chardonnay, that tempers each wine barrel prior to filling it with the bourbon. Rough Rider mellows while acquiring its distinctive character during this delicate second maturation period, adding a layer of dark red fruit and honey notes to the small batch straight bourbon. 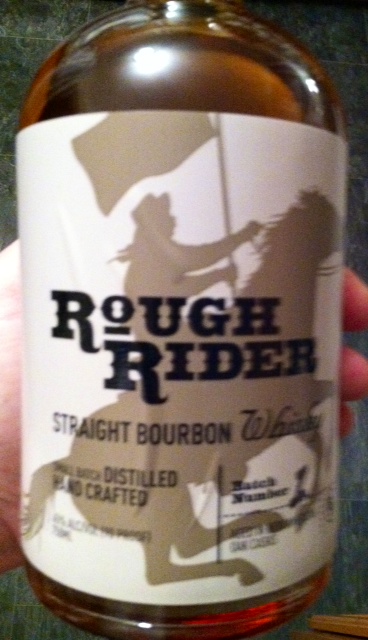 Appearance:  Dark amber in appearance this bourbon shows modest thin legs as it slides down the glass when swirled.

Taste: This bourbon hits you up front with spice, caramel and maple wood. Midway there’s a butteriness that seems to coat the sides and top of the mouth along with touches of candied spice, oak and vanilla. Lastly you are hit with spice and a lot of “bourbon heat” going down.  The finish is long with a lingering buttery texture and residue spice leftover. Also to note on the 2nd nosing I picked up a lot of heavy caramel and maple syrup in the glass. This bourbon took me for a ride from start to finish that left me feeling like I was sipping spirits down Kentucky way.

Conclusion: In speaking with L.I. Spirits founder Richard Stabile I appreciate the fact they finish their bourbon using old Long Island wine barrels for a “Reserve Aging” in their distillery as well as following traditional whisky practice. This keeps the “Spirit” within the Island as well as keeping roots with Kentucky bourbon proper. I love experimentation in spirits from utilizing different malts, wheat, barrels, as it opens up a world of new tastes and textures.  I am already looking forward to seeing what their game plan is for Small Batch No.2.  So if you like your Bourbon sweet and toasty to start with a lengthy finish that “Makes no apologies”  at the end in the heat department, then  try and get your hands on this bourbon before it “Rides” out the door.

The other day I decided to pull out of my humidor a classic cigar, an Opus X Reserva D’ Chateau. This is from the iconic Fuente Opus X line that in my opinion changed the level of premium cigar cigars when they were released in the 90’s. I’ve been fortunate enough to smoke Opus since its inception and have always enjoyed the full spice, leather and savory notes these cigars provide. I feel the smaller vitolas such as the #4, #5 and the XXX provide more concentrated flavors indicative of the brand however the Reserva delivers nuances that the aficionado will enjoy. Make no mistake; this is not a lightweight cigar as it yields full flavors.

My thoughts on this one:

The Reserva has that lovely reddish brown Dominican wrapper the brand is known for. A few veins run across this smoke but nothing that would appear to hurt its performance. There are no soft spots and the cigar feels appropriately packed with tobacco. The foot has the smell of spice, sweet raisin and tobacco.

Upon lighting I was greeted with spice, leather and coffee notes. The leather lingers on the palate while a retro hale gives you a rush of spice through the nose. This cigar always awakens my senses with its startup as these are the flavors I tend to really enjoy. Midway the spice adjusts to reveal those lovely graham cracker and cinnamon notes I usually get from this cigar. The burn was uneven and the cigar required several relights however it did not detract from the flavors. As it progressed the leather was more pronounced while the spice took to the background. This cigar builds in strength at this point. By the last third the leather, earth and sweetness interplayed leaving a balanced and harmonious finish. The smoking time was about 2 hours 10 minutes.

As far as taste goes I’ve always enjoyed the leather, tobacco and spice Opus provides. The downside to these smokes can be the constant relights as well as the uneven burns at times. In the past few years the latest batch of Opus hasn’t given me the balance of flavors as of old, however within the past year I’ve noticed a return of said flavors. I don’t know the specifics of the past years crops although I have some unverified ideas. If you’ve never smoked an Opus X it is certainly a cigar worth your while. The smaller vitolas will really accent flavors although if you have the time smoke the Reserva D’ Chateau and treat yourself to a wonderfully balanced experience. You deserve it.