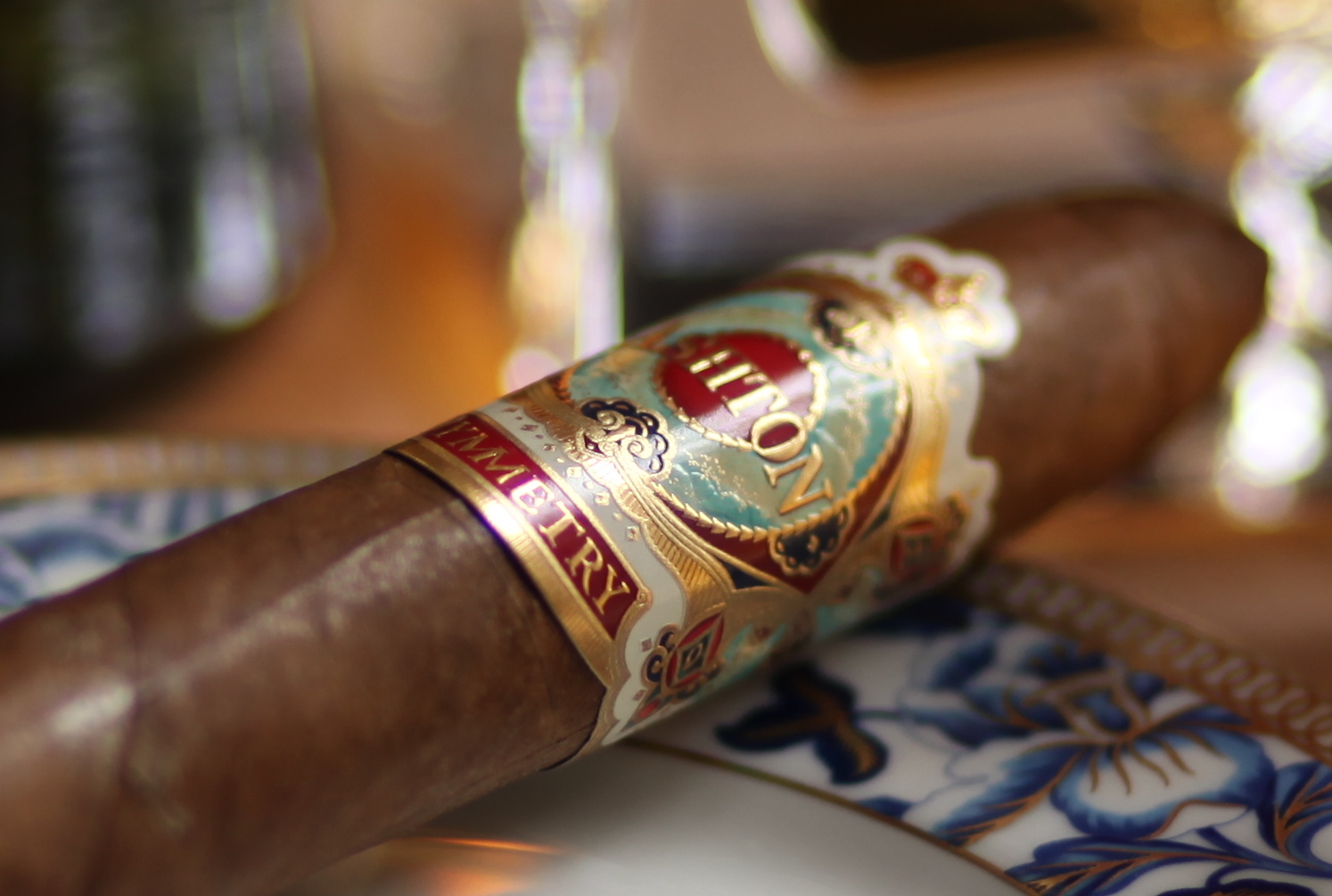 I am a big fan of Ashton’s cigar lines from their more mild Cabinet blends, to their fuller Virgin and Estate Sungrown cigars. Their newer Ashton Symmetry line is once again made in collaboration with the Fuente’s and lives up to its moniker of a perfectly balanced smoke. 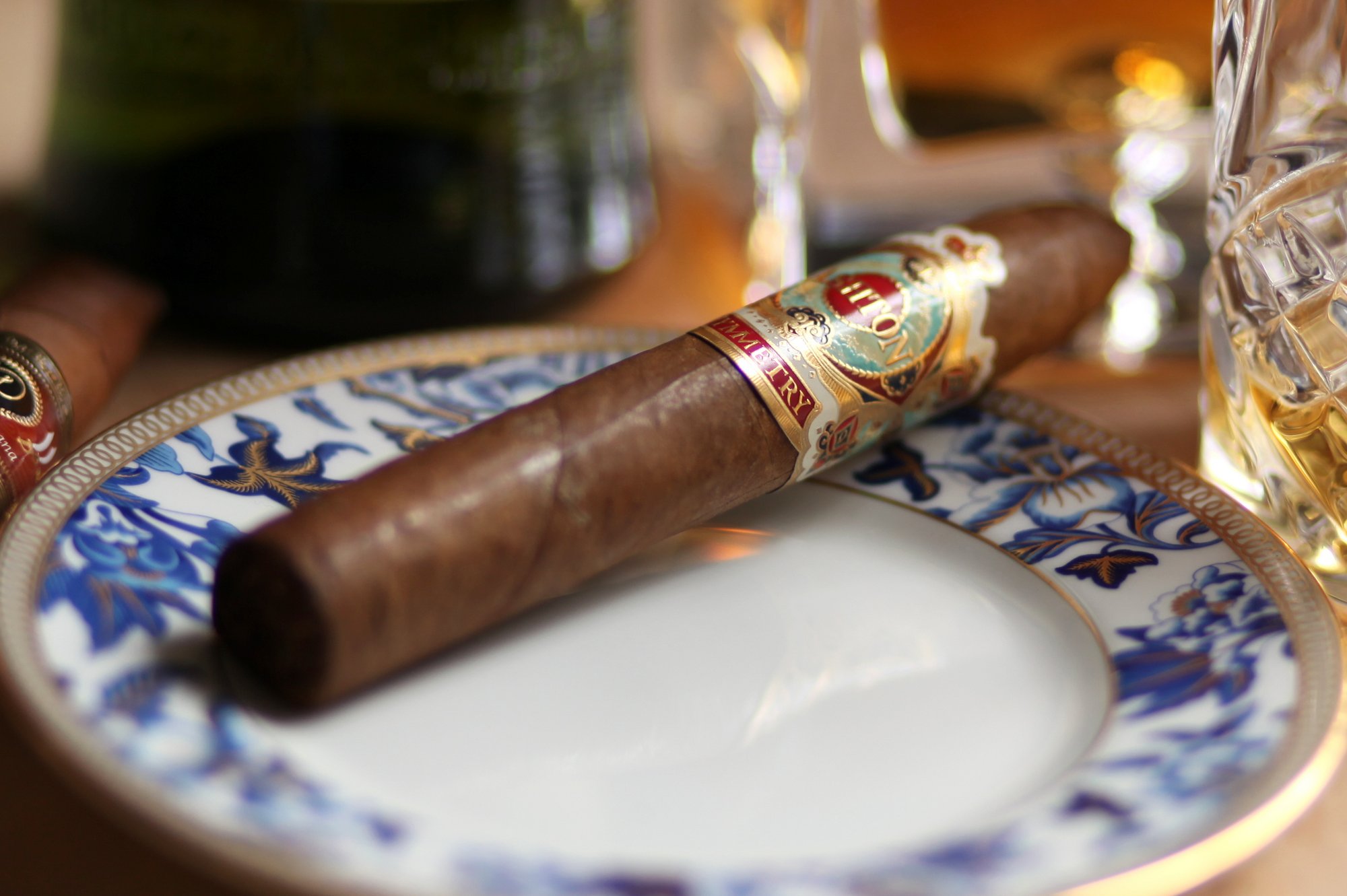 The wrapper of the Ashton Symmetry has a beautiful sheen that’s silky and smooth to the touch with seemingly flawless construction. Pressing the cigar gives the feel of copious amounts of tobacco throughout. The band is elegant with blues, reds and gold all in harmony. The word “Ashton” is in the middle of the band with “Symmetry” in gold balancing out the bottom and a crown hovers atop. A regal cigar to behold.

The Symmetry starts off with a serious amount of cinnamon and graham cracker followed by maple and sandalwood. There’s an underlying creamy element that coats the palate all the while baking spices appear to linger on the finish. Thus far this cigar is revealing complexity and style.

Midway a fuller blast of nicotine is noted with seasoned oak and a touch of leather. There is a bit of ripe plum on the retrohale followed by a vanilla sweetness on the finish. Rich tobacco dominates at this point with some toasted oak and leather coming through. Even with a fuller flavor at this point the Symmetry is careful not to overwhelm the palate but gives you just enough to catch these flavors and then scale back to a medium body.

The last third combines leather, wood and cream with a hint of that cinnamon once again. This spice revitalizes the palate and brings the cigar full circle. Some more of that graham cracker is present with a swath of lush dark fruit on the finish. An incredible smoking experience.

I am always impressed with the quality of Ashton cigars and how they take so much time in creating a new brand and blend. Their specificity to each profile is why they remain one of the best cigar producers out there. The Ashton Symmetry is just that, the epitome of balance in a smoke from beginning to end. You would be hard pressed to find a better example of complete flavors in a cigar. I would pick up a box without hesitation. 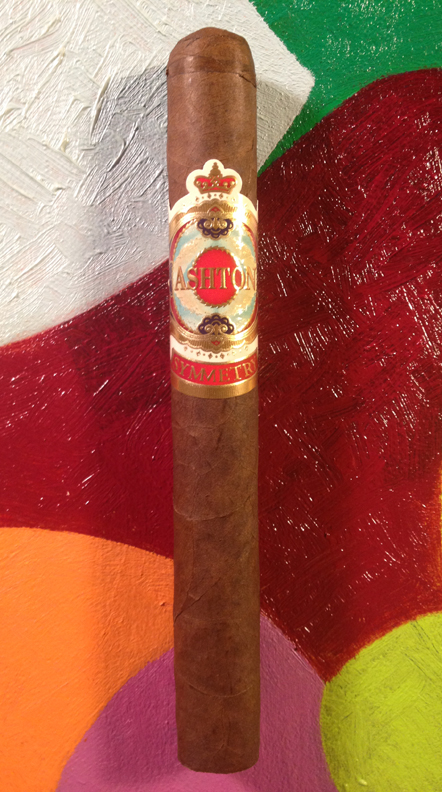 The Fuente family constructs the Ashton Symmetry for Ashton at the Fuente’s factory in the Dominican Republic. 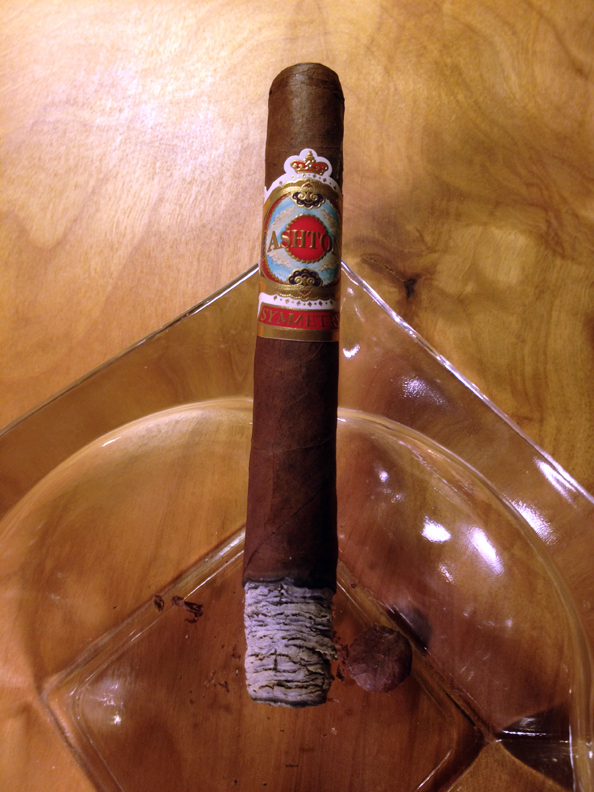 The Ashton Symmetry has a medium to dark chocolate colored wrapper, with a slightly reddish tint. The wrapper feel is slightly oily, very smooth, minimally toothy and velvety to the touch. It has minimal veins, tight invisible seams, and a nicely applied triple cap. With the soft box-pressed shape, there’s a densely packed bunch and an even sponginess throughout.

Cold Aromas: In the wrapper there’s cedar, leather, and a slight meaty, jerky, saltiness. The foot is chocolate, leather, slight floral notes, a sweet cocoa, and a touch of dried fruit. After clipping the cap, the cold draw is leather, touches of spice and white pepper, a little dried fruit, a bit of farmyard / manure and leaves a saltiness on the lips and tongue. Nice firm draw.

First Third: The first third starts with a white pepper spice on the draw and settles into a leather and fig mix. The leather and fig notes are both heavy, so for those looking for this profile will be delighted. Sweet and fruity with a dewiness and dampness to the texture of the smoke; bits of chocolate are noticeable but only barely. The middle is accented with notes of barnyard while a touch of saltiness lies on the back of the tongue and lasts through the finish. The aroma off the foot is a cedar and tobacco note. The burn isn’t razor sharp but performing just fine. The ash is tight, grey and white. As the cigar progresses, the spice drops off a good amount and dried prunes complement the fig notes. The first third shows how complex the flavor profile of this cigar is, and the saltiness being reminiscent of a fishy-type saltiness. The cigar’s profile at this point is a medium to full in body, medium to full in strength and full flavored. The smoke is thick but not chewy thick, more syrupy and molasses textured. The aroma is also of a delicious chocolate and leathery mix, slightly floral, like a cherry blossom and the fig last deep and long on the finish. 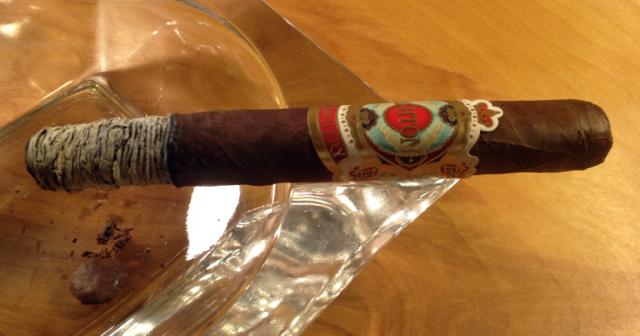 Second Third: The ash is tapped off at 1.75 inches and falls to one solid chunk. The second third sees the same notes at play with deeper leather. The fig is still very present and something of cured bacon type of meaty sweetness comes into play. Through the second third, the cigar holds consistent in its complexity and a fair amount of dry cocoa comes in on the draw with the fig. Though the pepper dropped, the smoke leaves a peppery tingle with a slightly gritty texture on the tongue. Good amount of salt lasts on the finish with the leather and notes of earthiness. The band is self-adhesive and comes off ok but slightly awkward due to the paper’s texture. At the end of the second third, the cigar is medium to full in body, medium to full in strength, and medium to full in flavor but still very close to full.

Final Third: The final third sees this cigar ramp up a bit in strength. While the overall flavor has come down, the complexity is still present. The fig and floral notes are still on the draw with a touch of very dry cocoa, with the tobacco, leather, earth and hint of spice dominating the finish. As the cigar begins to warm up, the spice also becomes a bit stronger and the leather and fig holding firm. The ligero is adding a lot of strength at this point, and the body of the smoke still holding a syrupy thick texture. The flavor is falling back but still holding with notes of leather, tobacco, and earthiness with white pepper on the finish. Nearing the end, the finish on the smoke becomes a bit cleaner and crisp and ends with slight notes of metallic licorice. The cigar finishes out at full body, full strength, and medium to medium to full in flavor. 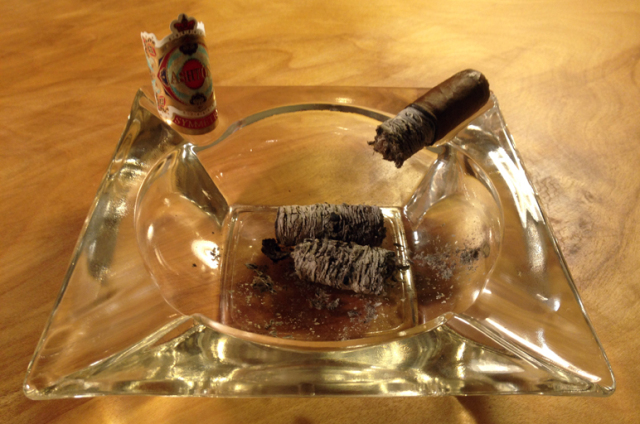 For a smaller vitola, the Ashton Symmetry is very stout, rich, and flavorful and being very complex in it’s first two thirds. In the final third the power becomes the more dominant characteristic. Throughout, the cigar carries notes of fig, leather and salt as it’s dominant notes but also has notes of dry cocoa, flora, white pepper, earth and barnyard. It’s very noticeable the cigar was constructed with very well aged tobaccos and toward the end the flavors meld nicely with a good strong tobacco core. The smoke is very smooth and creamy, with nice billows that roll off the tongue, though it does leave a gritty tingle coating the tongue. This cigar leaves a room note of chocolate and leather in the air with its tobacco aroma. There’s a good emphasis on balance and refinement early on in the smoke but toward the end and as the heat becomes stronger, that balance starts to break down.

Smoking time on this cigar was 2 hours.

This week, I was happy to be invited to 2 cigar events in NYC. The privilege of being wined and dined at flagship NYC cigar establishments is not wasted on me. I humbly enjoy every minute of spreading the good word of FineTobaccoNYC.com and The Cigar Rights of America.

The first was a release party at The Nat Sherman Townhouse for Mi Amor Reserva Cigars. This Nicaraguan blend made for Ashton was a nice full bodied smoke. Not too spicy, but not mild. As usual, no tasting notes from me, as you know, I have no palate.

The event was excellent, with Cuban food catered by Sophie’s Cuban.

Tony from Ashton Cigars was on hand and talked about the makeup of the cigar and how Ashton views their new line.

The second event was a real treat. The Rocky Patel Cigar Dinner and Birthday Celebration for Ron Melendi was fantastic. Nish Patel was on hand talking about 3 cigar blends given out over the course of the evening, and DeLaConcha’s house band, Smoking Grooves was fantastic. The event hosted about 40 people and guests were treated to an open bar and amazing dinner catered by Rue57. I was asked to say a few words and raise awareness for the CRA and our fight. I think it went well, and I was able to sign up a few new CRA members.

We were also happy to welcome a member of our lobby, Gotham Government Relations (GGR) to the event. Warren H. Cohen is GGR’s new Director of Public Affairs and is very interested in our fight. I plan to meet with him and follow up in a future post.

That’s all for today. See you after the next event!