Again, we lucky few get to explore the sensory overload of cigar and spirit. This time it’s rum and two graceful Nat Sherman cigars.
Per my process, I first taste the samples on their own, then again with each of our smokes. The surprise this time was how the smoke/sip sequence made so much of a difference. Read on for the adventure! (All photos courtesy Ron Diplomatico)

Nose: At first, the scent is quite phenolic despite its low ABV. Then it gives way to spices, honey and molasses. Classic rum scents. So let the first whiff from your glass blow off. Then you’re ready to start the journey.

Palate: Sweet, WOW! Power in a goblet! Yet this is as smooth as any whisky with a full mouthfeel. The flavor is consistent through the mid-palate and finishes with a smooth texture, almost port like. This is how aged rum tastes in its purest form. If you never had that experience, here’s your starting point. But it can be more than a drink. I thought Pour this over vanilla ice cream or as a topping on your standard Piña Colada.

Summary: If you seek strength with no distractions or deviations from the flavor, this is your signature bottle.

Nat Sherman Epoca – What a cigar! The cold draw was easy with coffee tastes throughout. Lighting up was simple, and the intake held the same gentility. I kept saying great cigar. But then the Exclusiva overpowered the Epoca’s grace. When you sample each, smoke first, then drink. You’ll get both quick sensations before the rum raises its flag forever. I would prefer a stronger cigar to stand up to the sugar cane. There are some spirits that demand a stick of power. This is one of them.

Nat Sherman Timeless – Another star. Kudos to Fearless Leader Matthias for this choice. The cold draw was spicy pepper with a bit more vigor than the Epoca. Lighting up brought forth tobacco and Latin espresso flavors galore, but it’s not too forceful. Quite refined. The lit draw required a pull early on, but then settled into its rhythm. Moving on to the Especial, the rum’s intense sweetness requires that the smoke go first on the palate, otherwise you might lose the benefit of the cigar’s flavor.

Summary, if you like and crave distinct taste sensations, this works well. Otherwise, seek one of the five cigars that will certify you as a badass! Then pair it with the Exclusiva! That’s a UFC cage match Smackdown! https://www.smallbatchcigar.com/5-strong-cigars-that-will-certify-you-as-a-badass

Color: The same lovely dark red color of the Exclusiva but with a shade of mahogany. Beautiful!

Nose: Oh my, the sense of Oloroso sherry mixed with American white oak. Beware; it might lure you into not drinking! This is as complex a nose as rum can be. I’m ready for the deep-dive.

Palate: Now there’s a surprise. This is lighter and more nuanced that I suspected. Such a great stability as coffee, delicate pepper, chocolate and vanilla flavors combine for a wonderful pre-dinner drink. It’s a great mood and table setter for whatever food follows. This is your second stop on the rum journey. You already know the genre’s signature sweetness. Now you’re ready for a novel experience.

Summary: Sophisticated Enthusiasts will enjoy this balanced offering. It’s not your father’s rum! Make it your own!

Nat Sherman Epoca – A delightful encounter. The cigar tamped down the sugar quality and brought out the woodiness of the rum with just a hint of pepper. There were distinct flavors here. But it wasn’t a struggle for survival. Rather, depending on the sequence of smoke and dram, one taste politely ceded its place to the other, then returned at the finish to remind you where you started.

Nat Sherman Timeless – Well now, remember that slight pepper tinge of the 2005 I mentioned? This cigar brings out every fragment and adds its own to the mix. Ahhh… there’s the sweet alcohol. Try the rum first, then the cigar. You’ll discover an increasing lushness in both. It turns the Timeless into a nice contemplative smoke with a myriad of sensations to occupy your mind. Terrific.

Palate: Sophisticated, as you’d expect. Maturation in Pedro Ximenez sherry casks will evoke deep notes of tobacco laden warm spices. Then the delicate sweetness of cinnamon ice cream rises, only to give way to some heat. After all, it is 94 proof. But don’t worry. The fire fades, leaving burnt caramel in its wake.

Summary: This is a balanced jewel with high ratings from many critics. The Enthusiast / Adventurer will enjoy a superb after dinner dessert in their glass or with a light cigar.

Nat Sherman Epoca – Like the 2005, the Epoca brings out the wood cask of the rum. But this time it’s the super sweet staves of the PX.  It’s an erudite combination with the same genteel yielding of the cigar and spirit. Try them in any order. While it’s not a true combination, you’ll enter parallel universes emerging on the other side all smiles each time.

Nat Sherman Timeless – Hmmm. Not what I expected. I thought the experience would mirror the Epoca, albeit with a stronger flavor. Not true. There’s a bit of a battle going on here. But in the end, you’ll benefit from the distinct nature of each flavor profile. Just remember to double down on whichever you want to remember most. If it’s the smoke, two puffs, then the drink. If the rum, two sips sandwich the cigar. Either way, you’re bound to remember the evening. 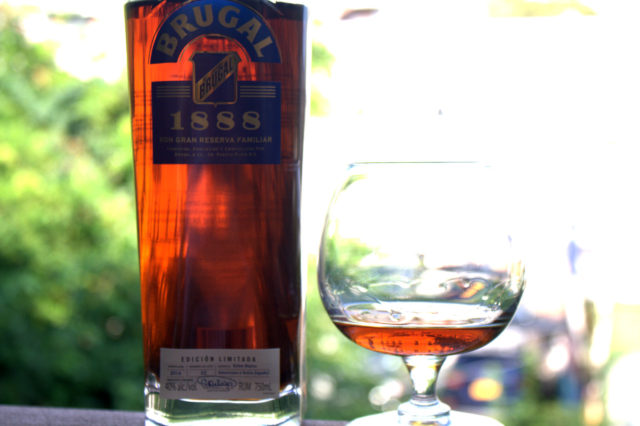 1888: the year that Don Andrés Brugal Montaner introduced his first dark rum to market – and the also the name of Brugal’s most enthralling rum (yes, you see where this review is going).  Brugal 1888 has long been a favorite of mine, so it’s about time I finally sit down to write an organized review. This rum carries all of the hallmarks of Brugal rum (signature dryness), but is given added complexity and texture after being aged 6 – 8 years in ex-Bourbon American oak casks, followed by first-fill Spanish Oloroso casks for a total aging of 8 – 12 years.

My first taste of Brugal 1888 was actually at one of our events at the Carnegie Club in 2014. I was blown away. And I remain so.

I don’t think I can name another spirit, perhaps with the exception of Aberlour A’bunadh, where the influence of the sherry cask finish is so pronounced.  This rum is stunning, in appearance and in flavor. The bottle, with an angled look more fitting a crystal decanter, only adds to this spirit’s sense of luxury.

The nose has a heavy texture, full of fruit, dates, molasses, and a bit of the sherry cask finish.  Intense, pungent, sweet – in a phrase, ready to kick ass.

The mouth feel is heavy and intense. This sipper comes in smooth, turns up the flavor, and then the sipper enjoys a nice, long, sweet finish. What I find so unique, striking, and lovely about this rum is it’s ability to present a sip that is full bodied, complex, palate-saturating, yet still dry compared to many other rums which can bring great flavor but at the cost of the sipper feeling like he’s drinking cough syrup.

Rum sippers: finish up your current drink and make your way to the liquor store.

Whiskey sippers: put your drink down now and pick up a bottle. You will be glad you did. 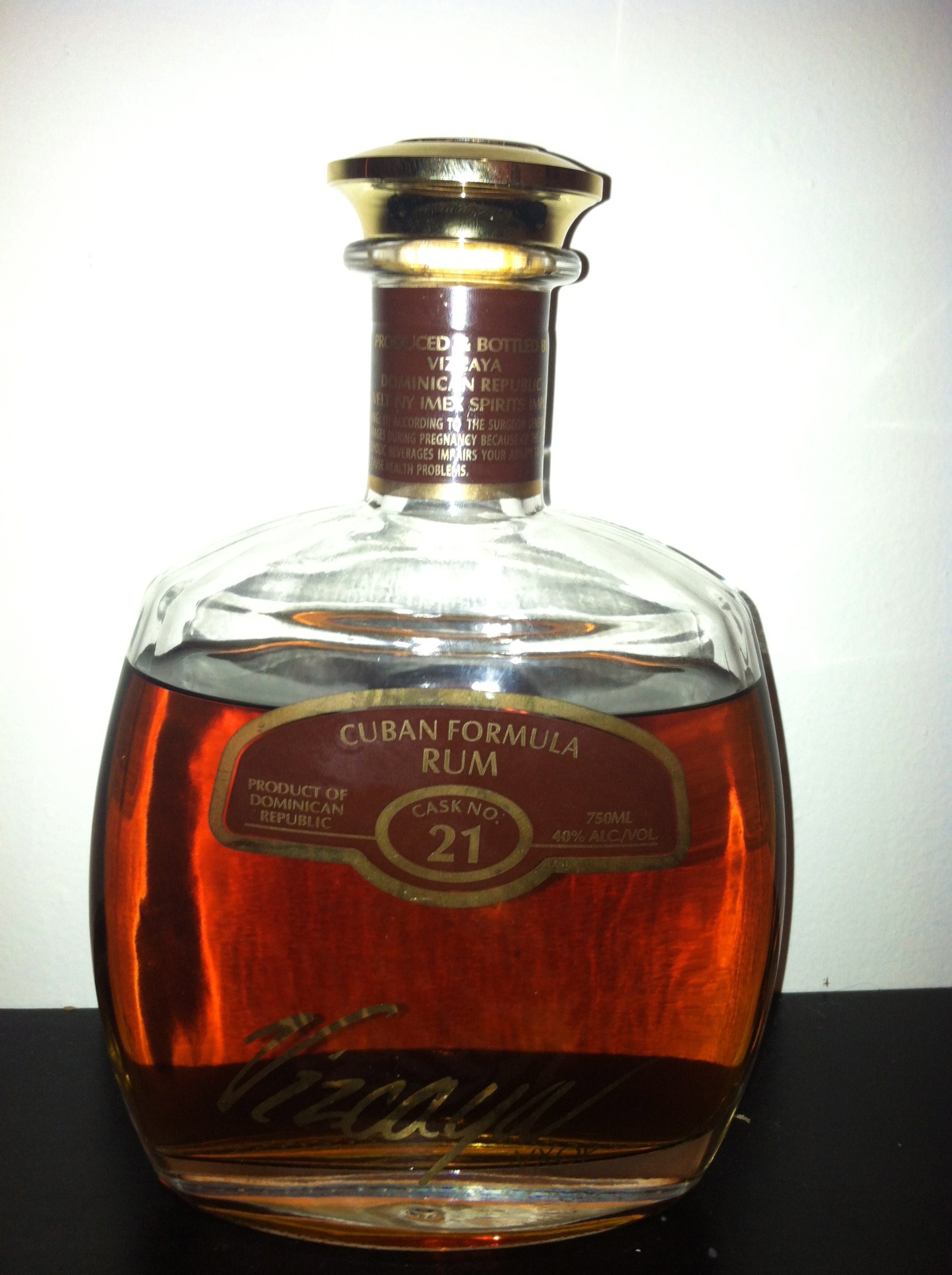 I came across Vizcaya VXOP Cuban Rum Formula Cask No. 2a1 about a year ago. After finding a bottle in New York and trying a dram, I wanted more details about the rum. Vizcaya provides an excellent description on their website:

Made in the Dominican Republic, Vizcaya VXOP starts with sugar cane harvested at the peak of freshness, then quickly pressed to collect its fragrant juice. The juice is fermented and distilled in small batches, before being aged in selected oak barrels that formerly held bourbon. This process, known as methode agricole is the unique distilling method that infuses Vizcaya VXOP rum with its exquisite bouquet, smoothness, and delicately refined taste.”

The rum sounds appetizing from the description. Now time to see if this rum’s can stand up to its high reputation.

Bronze. When swirled around the glass the rum develops legs before slowly rescinding back down.

There is vanilla and caramel concluding with a faint hint of spice.

The palette follows the nose closely. Upon making contact with the palette, the rum opens with vanilla, caramel, and butterscotch before proceeding to an intricate floral note. There are hints of bourbon and woodiness from aging the rum in bourbon barrels adding complexity. The rum finishes with a light spice that complements the prior delicate flavors.

Smooth and velvety. There is no burn. 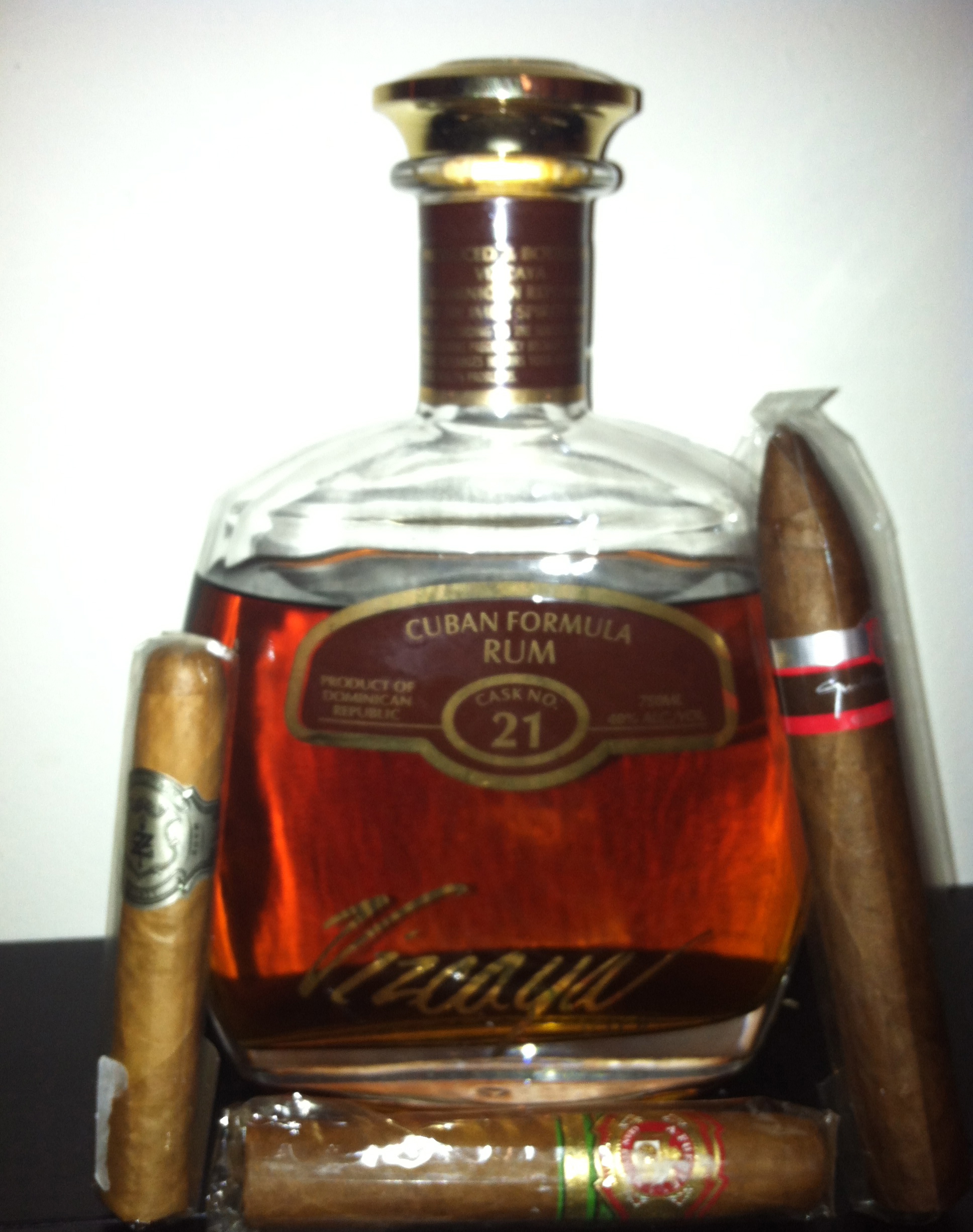 I would recommend the Chateau Fuente, Guillermo Leon, and Zino Platinum for pairing with Vizcaya VXOP.

The award given to Vazcaya VXOP, best in show and double gold, display the craftsmanship that went into creating this exquisite rum. If you enjoy rum then I suggest you track down this rum.