In April, Wall St. Humidor joined the ranks of other uniquely New York lounges consigned to memory like Velvet Cigar Lounge in the East Village, Beekman Bar & Books in Midtown East, JR Cigars in Midtown, and Merchants NY Cigar Bar on the Upper East Side.  If you didn’t hear about the closure, that’s because the only evidence of its closing is its sudden absence. The website is down, phone disconnected, and a ‘for sale’ sign hangs above the entrance.

In fact, if you’re a NYC cigar smoker and haven’t heard of Wall St. Humidor at all before, don’t beat yourself up. For most of the last ten years the two-story lounge was only known by a smaller inner-circle of cigar enthusiasts and FiDi workers, and one can only guess this was one of the factors that led to its closing.

The demise of Wall St Humidor is sad for a few reasons. First, the main floor, though a bit on the shabby side, was very large and had plenty of seating. And although the staff had a well-earned reputation of being inexplicably rude to newcomers (a reputation I had proved to me on two occasions), it was still a quiet refuge where cigar smokers could pick out a good smoke and take a quiet break.

For those that spent time at the place, what may be missed most of all is the downstairs lounge, which was, in my opinion, one of the most beautiful private lounges in the city, with a baby-grand piano, modern interior, private member lockers, and much more. Losing that room is sad for the entire city, because it marks the end of one of the few remaining rooms where everyday citizens can sit down, light up, and talk about issues that really matter.

We can hope that this is where the sad trend of cigar lounge closings ends, but with ever more stifling city ordinances around anything tobacco, and new federal laws (current and future), the list of closings will likely only grow in the next decade.

Last night I had the pleasure of smoking the Illusione/Smoke Inn collaboration which marks the 9th edition of SI’s Microblend series. The Illusione “Pactum” which gets its name from the Latin verbiage “Agreement”, or at that time in ancient Rome it came to mean a “Gentleman’s Agreement”. I can say knowing Abe and Dion personally these are two true gentlemen who seek to provide the highest quality in a cigar for the connoisseur. Being a big Illusione fan I was very excited to try this smoke and here is the first exclusive review you will find. Enjoy!

The Illusione Pactum has a gorgeous chocolate wrapper with a nice sheen and slight veins on the sides. The box press is perfect and there are no soft spots with a feel of well packed tobacco inside. The dry draw yielded raisinated flavors and a cocoa sweetness.

Lighting up the Pactum greeted me with earthy characteristics and a distinct sweetness from the wrapper. The first third of the cigar brought on some full tobacco flavor due to the higher priming from the Nicaraguan filler leaves. The ash was sliver and gray and fell off on its own. Midway the cigar brought out a bit of wood, hay and a slight gingerbread note. All the way the Pactum gave the sweetness from the San Andres ‘Capa Fina’ maduro cover leaf which really balances out the smoke. The final third gave a lot of the similar flavors as the last half which is not a bad thing at all. The combination of wood, sweet and rich tobacco hit all parts of the palate and gives you an excellent example of what a balanced smoke is all about.

I have been continuously impressed with Abe’s Microblend series not just as a concept but knowing the personal attention he gives to each blend and working with the brand owners. Dion of Illusione is a master craftsman and a perfectionist in what he puts out. When these two make a “Pactum” you can rest assured you are getting a smoke worthy of the Roman Empire. Pick these up before they sellout as other Microblends have.

Avialble at Smoke Inn shops and their website if you are intrested:

For those of you who are unaware Pete Johnson of Tatuaje has been making monster movie themed cigars since his first hit debut “The Frank” which was in my opinion one of the best Pepin made sticks created. I remember when I was able to purchase as many dress boxes as I wanted before these got to be collectors items and I am glad I picked up a few. These are now sought after smokes commanding outrageous prices. I have been fortunate enough to smoke all the Monster series and think “The Boris” is the next best AND I think it has aged better than any other. If you find one grab it. But enough about my reminiscing, let’s get to the latest stick. I just smoked the new Tatuaje JV13 or “Jason” for the famed “Friday The 13th” movies and here are my thoughts. Enjoy!

This cigar sports a sharp dark red label with the Tatuaje name and “Monster” written in black. A beautiful contrast to the dark chocolate wraper. Very well constructed with no soft spots and seemingly full of tobacco. Smells of earthy, sweet, leather, hay. 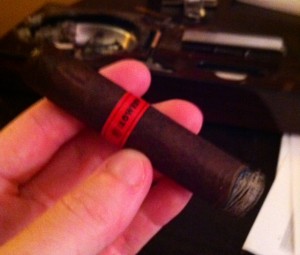 The draw dry yields earth,hay and wood. Upon lighting the earthy flavors take the forefront with slight oak and dryness of leather. The smoke is hefty to start with a strong body of flavors rolling around the tongue. More of the oak continues with a bit of espresso, vanilla and earth intermingling throughout. There is a bit of black pepper midway on the palate and a rush of spice on the retrohale. Lots of wood/oak flavors on the finish with continuing leather on the sides of the mouth. The cigar continues to a medium body with changes of sweet and even savory like that of sweetbreads.  Towards the last third a bit of the barnyard twang comes forward with a companion of earth and hay. The strength wanes a bit and the oak, barnyard and leather flavors continue. The cigar finishes with a bit of sweetness and ends on a medium note. A thoroughly enjoyable cigar. 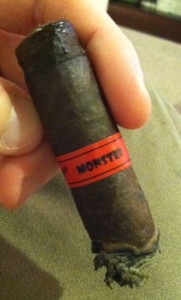 The Tatuaje Jason was not the most complex cigar as it stuck mainly to sweet, leather, hay and oak however I enjoy all these flavors together when not overpowering. The Jason succeeded in being a medium to full cigar with a perfect balance of all these flavors. I haven’t loved all the monster releases although now I will say that the JV13 is my third favorite. The Frank when it was released was number one although in the past 3 years it has waned dramatically. The Boris is my second even though it’s technically a monster “unmasked” cigar but now the JV13 is my 3rd. The big question is will it wither and die like Frankenstein did or will it live on for more features like Boris? Who knows horror fans but for now get a piece of Jason before he gets you!

In March 2011, I was fortunate enough to be invited to Camp Camacho in Honduras, to tour the fields and factories and observe what a Central American premium hand rolled cigar manufacturing was all about. Of the many new lifelong friends I made on the trip, one of my favorites is a madman from Kansas, named Paul. Besides being one of the funniest guys I’ve met through cigars, Paul has a voracious apetite for all things consumable, cigars being one of his favorite.

Paul recently spent an afternoon with me running around NYC with me to visit my favorite shops. My goal was not to “WOW” Paul with the NYC scene, but rather let him reconnect with some buddies who were also on the Honduras Trip. Paul is a student in Kansas and a PT employee at The West Side Humidor in Witchita, Kansas. He’s got a better palate than I, and working at a cigar shop, certainly tries a lot more than I do.

The 3 midtown shops that we visited were Davidoff Madison Ave., DeLaConcha & The Grand Havana Room, we also visited O.K. Cigars in SoHo.

Here’s a few pics of the man in Honduras:

Our Man, Chillaxin in deep thought back at the Camp Camacho Hacienda

Our first stop was Davidoff of Geneva’s Madison Ave. Flagship Location (Davidoff Madison Ave.). We were able to catch Chris and Lino and share a cigar while we were there. These are 2 extremely knowledgeable, extremely personable guys. We had a great time in Honduras w/them.

Next, we went to see Ron and Chris from DeLaConcha. Ron was out of the shop with his family for the holiday, but we were able to chat & smoke with Chris while we were there. I love chatting w/Chris. He always makes me laugh.

Hanging with Chris from DeLaConcha

Then, we went to my stomping ground, The Grand Havana Room for a smoke and some Flor de Cana Rum, that made us reminisce about our ossified times in Honduras. Good times.

Lastly, we took the subway downtown to SoHo and tried to catch Len at O.K. Cigars. He was out for the holiday as well, but we toured the shop and fell in love with come classic tobbaciana on sale. Great shop if you are ever downtown looking for a smoke. We didn’t take any pics here (probably, because of the rum at our last stop.)

I had a great time running around the city with Paul and I hope that we can do it again soon. I’ll come to Kansas too, really. Say hello to Ryan and Gordon also!

“Rolling through New York with Big Sexy him self was a blast. The man has his finger on the thriving pulse of the smoking comunity”.