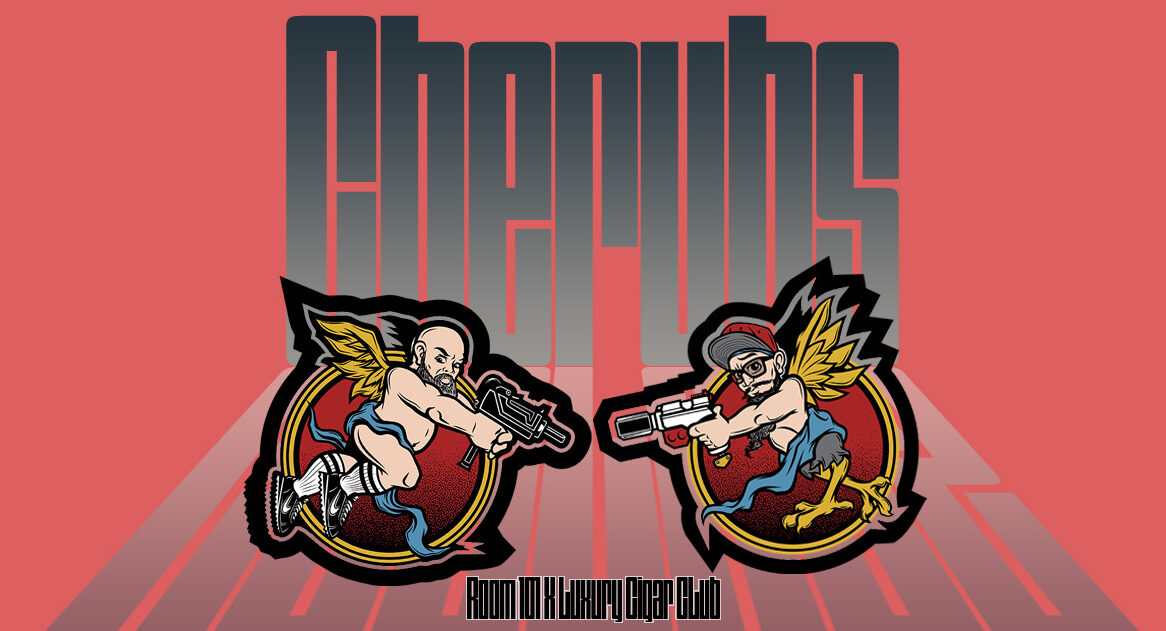 Cherubs by Room 101 and Luxury Cigar Club is the first Limited Edition offering available in Luxury Cigar Clubs Exclusives product line. Produced at Joya De Nicaragua, these Cherubs are limited Edition Cigars which are associated with the Johnny Tobacconaut Story line. The Cherubs will be available at Luxury Cigar Club and its Preferred retail partners. Shipping nationwide at the end of May 2022. The Cherubs are a head to head set of cigars available in 5 packs. The wrapper and filler on all of these cigars is the same, but the filler blend has adjusted ratios between the two cigar to create similar, but unique experiences.

Luxury Cigar Club (LCC) is a monthly cigar subscription service for the smoker, seeker, and collector of fine, rare, and boutique cigars and cigar brands. The two owners, Chris and Ben, pride themselves on their work ethic, superb customer service, and overall integrity. Because of these traits, they have created and maintained a strong bond with many cigar companies.

The habano wrapper is quite oily, giving it a darker look than it otherwise might have. Two visible veins run down on the side of the cigar. The filler tobacco fills the cigar to the brim without it feeling dense.

There is a scent of chocolate and raisin coming off the wrapper. When I trace my nose down to the foot of the cigar, I get a scent of dry tart stone fruits and old books. I slowly insert the head between my Xikar XO cutter – just enough to shave off the cap. I then take a cold draw and taste creamy cocoa, tree bark, dry hay, and a slight sweetness on the finish; pepper spice is starting to settle on my tongue and lips.

After introducing some flame to the cigar, I take my first draw and instantly my senses are awake. The smoke itself is creamy, tagging along with notes of dark cocoa, caramel, cedar-wood, and red pepper spice. To conclude the whole experience, sweet chocolate lingers on my palate. The retrohale acts on its own contrasting with the flavors on the palate: citrusy berry, cedar-wood, and an ample amount of red pepper spice.

So far, the only negative thing I can say about this cigar is the uneven burn line. However, I have to mention that I am smoking the cigar outside on a cool early winter morning which can be a factor in the issue. With that being said, the ash is stacking evenly, and the cigar produces a good amount of smoke.

Arriving at the second third, I notice two flavors become MIA: cocoa and spice. The character of the smoke becomes even creamier, and I get flavors of pistachio, cedar-wood, dry hay, tan leather, and caramel. On the retrohale, I’m tasting a little floral with almond and warm baking spice.

I have to restrain myself from constantly puffing on the cigar, hoping slowing down would fix the burn line issue. Even so, one side is in a constant battle with the other, but not bad enough for me to intervene with my lighter.

As I get to the final third, the battle of the burn line concludes, and the cigar evens itself out. To my surprise, the flavor keeps evolving, and embraces me with flavors of creamy oats, almonds, sunflower seeds, cedar-wood, and sugar in the raw. This time, the retrohale amplifies the flavors with cedar-wood, roasted peanut shell, and baking spice. I continuously drown myself with the aforementioned flavors, hoping the next puff would not be the last one. I knew I was on my final puff when my fingers got pricked by a burning sensation.

Billy and Gus (Artesano del Tobacco) hit another home run with Choshi. The transition from a heavier profile like cocoa and leather to a lighter one with almonds and sunflower seeds is simply brilliant. And all the while carried by a sugary sweet finish on the palate. The complexity was very engaging and kept me on the edge of my seat. Unfortunately, the burn line had a negative impact on my overall experience. As mentioned however, this may have been affected by outside elements. Overall, I would recommend this cigar to anyone interested in experiencing bold flavor, transitions, complexity, balanced profile, or anyone wanting to smoke a great cigar. 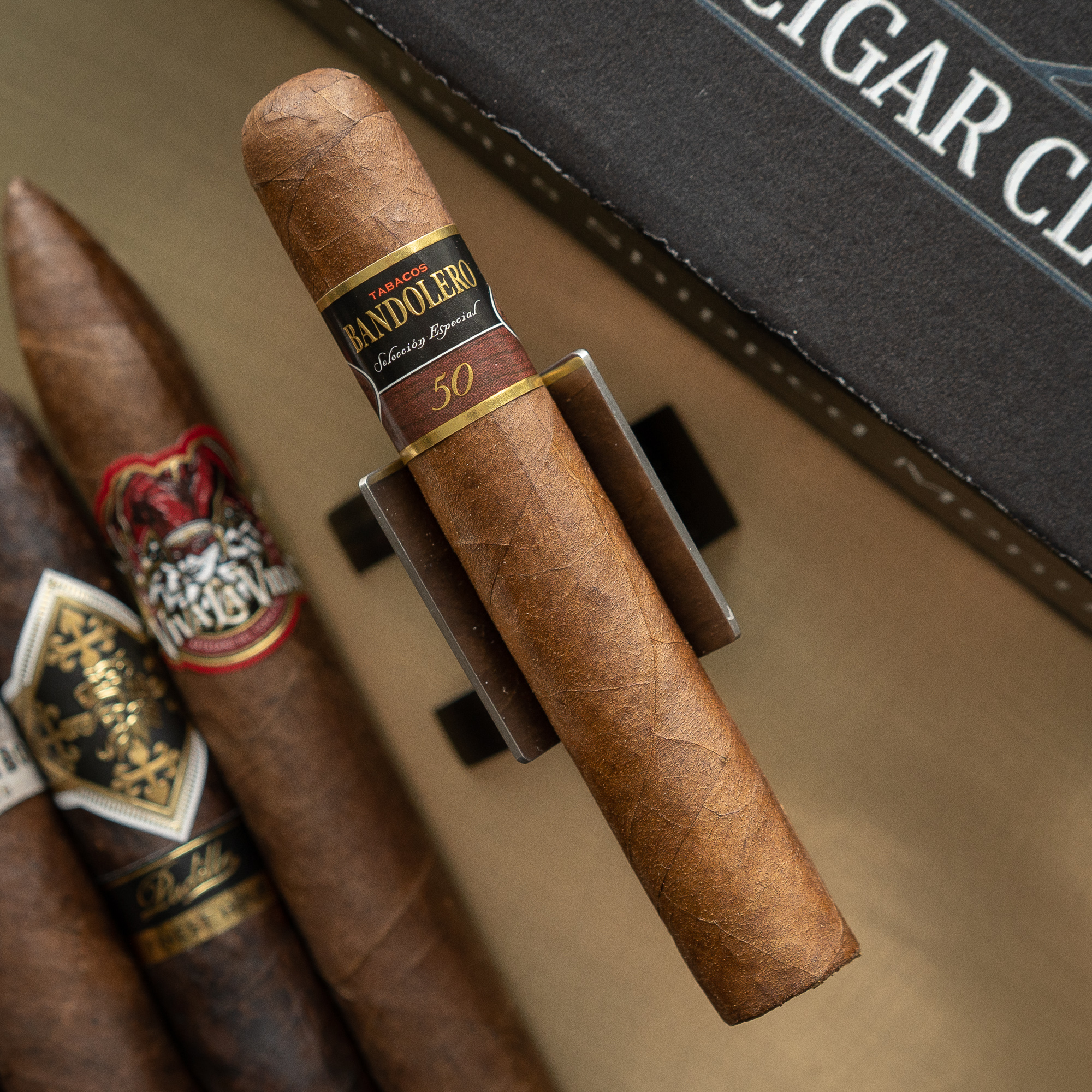 Up for review today is the Bandolero Seleccion Especial which I discovered through my friends at Luxury Cigar Club. They’re great in part because they introduce cigars in their monthly boxes that are a bit ‘off the grid’ but also exceptional from a quality standpoint.

In any case, Bandolero cigars are produced by Neslon Alfonso and Selected Tobacco. Alfonso is famous for his work developing the branding for the Cuban Cohiba “Behike” which is renowned as one of the most desirable (and expensive) cigars in the world.  Selected Tobacco on the other hand is a company now famous for two ultra-premium (and similarly expensive) non-Cuban cigar brands: Atabey and Byron Cigars. The Bandolero Seleccion Especial is billed as a less wallet-crushing cigar from the same maker, but only tasting the product will determine if it lives up to the same standards as the other brands.

Well, I can’t say I understand the branding on the band, especially given the branding mind behind this cigar. The mixture of black, gold and brown is not very appealing, and the brown portion of the band seems to be a printed wood texture (weren’t we done with that in the 70’s?).

Thankfully, the outer wrapper is a different story: pristine, with just one substantial vein and an otherwise smooth texture. The cigar is springy when squeezed, and as I squeeze along the length of it, it seems consistently packed.

Taking a whiff off of the foot I pick up predominantly sweet aromas of peanuts, granola, coffee bean, and earth. The cold draw is less interesting, with just a bit of sweet earth and a slight tingly spice.

If the branding on this cigar is bad, the opening flavors are the exact opposite.

The Bandolero Selecccion Especial opens beautifully, with surprisingly mild, approachable smoke. The texture is extremely creamy, and the core notes of the profile at the start are peanuts and oak, with hints of floral and spice sometimes evident in the aroma. The retrohale is shockingly mild, with notes of warm bread and light baking spices. Construction wise, the draw is perfect, a 7/10 in terms of amount of restrictiveness, and the cigar produces ample smoke. The quality of the tobacco used in this cigar is unmistakable. 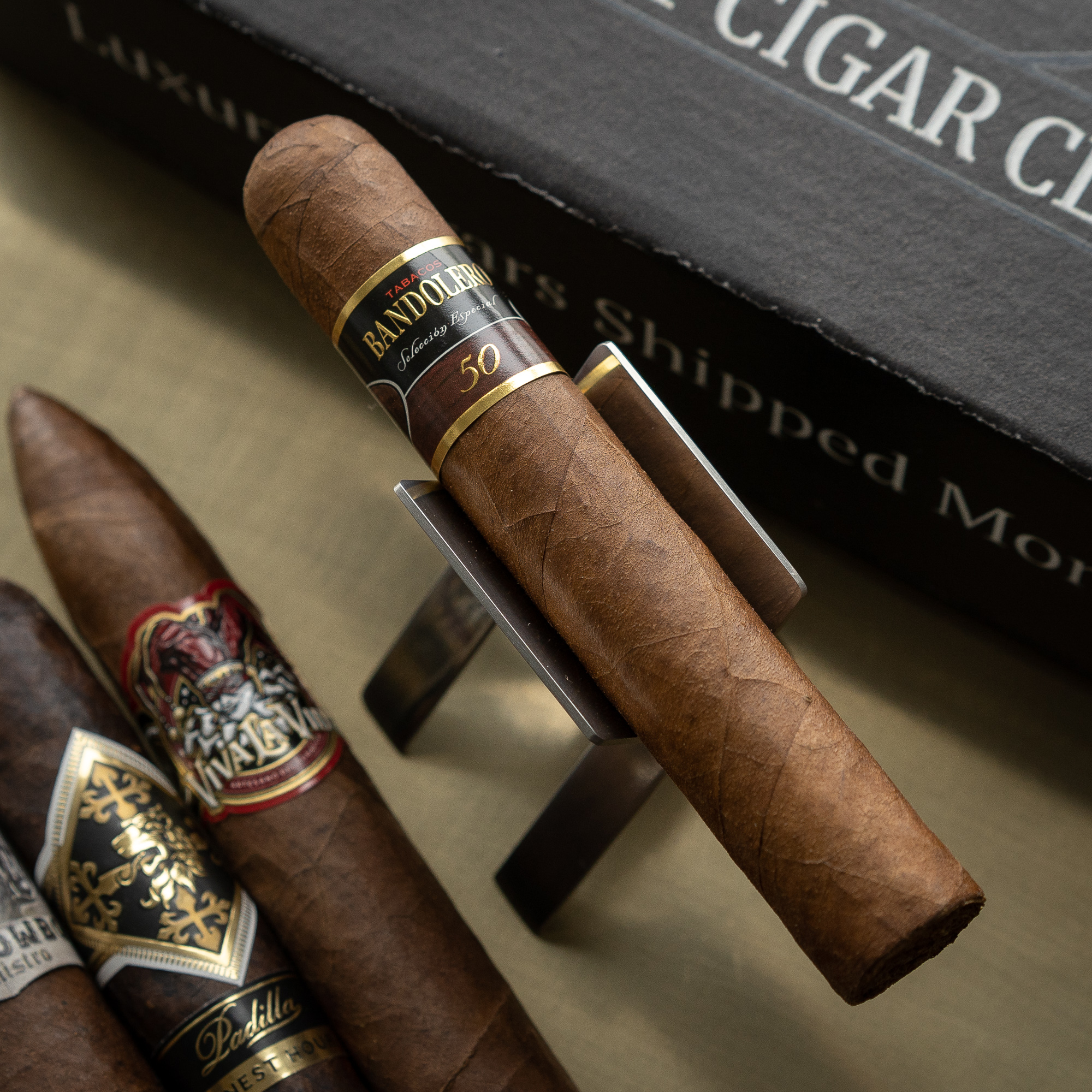 As the cigar develops more into the first inch, the texture and experience of the smoke starts to resemble my experiences smoking the Cuban Montecristo No. 2. That is to say, the draw is very smooth, the texture is silky, and the flavors are present and pronounced. Throughout the first half, construction is excellent, with the ash dropping in inch and a half increments and no issues with the burn.

The Bandolero Seleccion Especial smokes mostly the same all the way until the beginning of the final third. Definitely disappointing as the cigar started off great and I was hoping for a bit more flavor development in the second third.

In any case, the final third does have some significant changes. Although the body of the cigar never reaches medium, it does build a bit, with a noticeable increase in spiciness on the tongue and in the retrohale. The flavor palette as a whole also shifts, away from the creamy sweetness of the first two thirds and toward a more bitter base with notes of wood, fresh bread, paper, and nuts. The big negative though about the final third is that the smoke begins to heat up far too soon, with at least an inch and a half left before the cigar begins to be difficult to continue smoking.

After smoking the Bandolero Seleccion Especial, it’s obvious to me that it utilizes some very special tobacco. The first half of the cigar is close to sublime, with a very Cubanesque flavor profile that features prominent notes of nuts, cream, floral, and light spices. Unfortunately, the complexity and harmony falls off a bit, making the second half a lot less compelling overall.

Either way, I think this particular cigar would be a worthy investment for veteran cigar smokers looking to experience a Cubanesque non-Cuban cigar.