The makers of Montecristo announced recently that it is recently a figurado vitola in its wildly popular Montecristo No. 2 line. We should make clear for beginners that this press release refers to the Cuban Montecristo – not the Dominican cigars you see at convenience stores.

February 26, 2013 (Havana, Cuba) — Heard of a brand with a name of its own? That’s Montecristo. The Montecristo legend was born from the reading of Alejandro Dumas’ famous novel The Count of Montecristo to cigar rollers at the H. Upmann factory in Havana. Since then, the legend has grown larger-than-life, as the famous character.

Penciled in as a tasting benchmark to size up the other Habanos, Montecristo will step on the limelight during this Festival with the launch of two new vitolas and the presentation, with absolute respect for its history, of a new band in an effort to boost its value and image. Now a new proposal, aimed at reveling all that taste in a shorter span of time, has popped up.

Yet it had been a long time since the Classic Line didn’t have a range launch, a move that give twice as much significance to the unveiling of Petit No.2 because it clings to the brand’s tradition by now adding a figurado, a niche in which the Montecristo No.2 is quite a benchmark.

Completely rolled by hand with long filler, the ring gauge will catch on among smokers because of the easy grip and good burning that makes each puff a thrilling moment. For its part, the midsize length makes customers love every minute of it, despite a tough working day.

The exquisite blend of tobacco, exclusively rolled with filler and binder leaves hailing from Vuelta Abajo, guarantees faithfulness to the original Linea Clasica’s mild-to-strong taste and captivating scent that enthrall both seasoned smokers and those who are now cutting their teeth in the realm of Habanos.

The Edmundo line grows on with the coming of Double Edmundo, also featuring the new Montecristo band and bigger size. This Habano of Dobles factory vitola delivers this blend’s classic scent and taste for approximately a one-hour-long smoke.

Though featuring thinner ring gauge –large enough the delight passionate smokers- its length guarantees slow pleasure and intimate contact between smoke and spirit. In a word, this is a great opportunity to grab all the taste Montecristo has to offer… unhurriedly.

October 4, 2012 (Tampa, FL) — This holiday season is all about affordable luxury. We have developed several new products geared at providing you the most “bang for your buck” without compromising taste, quality and construction. Take a look at some of the new items scheduled to hit shelves just in time for the 2012 holiday shopping season. 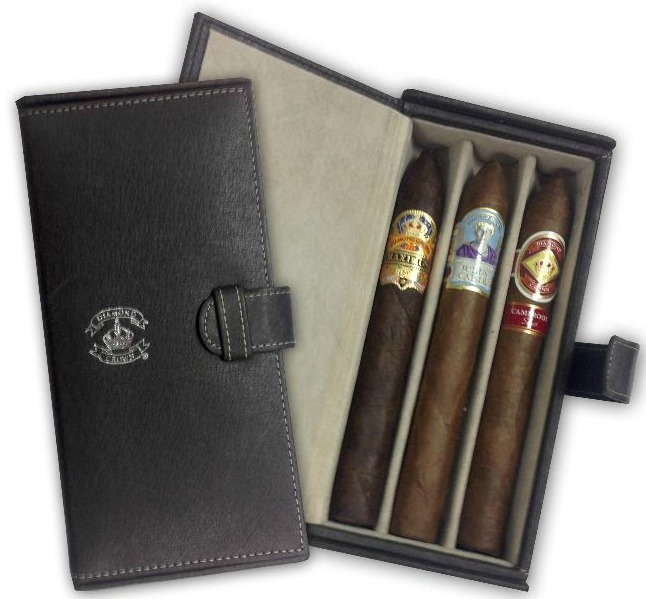 While you were sleeping: Jacksonville man tells police he was only smoking a cigar in stranger’s SUV

What is the world coming to, when a man can’t sit in a stranger’s car and light up a nice smoke?

Clifford Davis of Jacksonville.com writes on his blog that, just before midnight, a Jacksonville man looked outside to see a stranger sitting in his wife’s SUV, lighting up a cigar.

When he went out to ask the man (presumably something like, “what the hell are you doing?”), he was met with a fist flying at his head. Unfortunately for the Melvin Marshall, the man opening the car door ducked the punch, pulled him out of the car, and wrestled him to the ground until the police arrived.

My favorite part of the article:

“Marshall said he did not intend to take anything out of the vehicle but was only smoking a cigar in the SUV while he waited on a friend, he told police in the report.”

Marshall suffered a bloody nose, swollen eye, and some scrapes. “But,” I can just imagine him saying as he gets hauled off, “that Rocky Patel makes some great cigars.”

Big Ronnie: What You Can Do to Protect Your Right to Smoke

Matthias recently sat down with Ronnie Parisella, CRA ambassador and FineTobaccoNYC contributing writer to chat about local and national cigar politics, with a focus on New York City. If you are a cigar smoker in New York City and want to know how you can help protect your rights, or get to know your CRA rep a bit more, then read on.

When did you originally begin smoking cigars, and what brought you in?

I was working for Charles Schwab & Co, Inc. in Brooklyn as a help desk engineer in 1997. Cigars and the economy were booming, and the NYC cigar scene was very active. This was before Bloomberg stopped smoking in bars & restaurants. My first cigar was an Ashton Maduro that I purchased from Barclay Rex on Broad St. downtown. I loved talking cigars with shop reps and still do. I’ve never walked into a humidor and failed to learn something useful. I love listening to guys argue about cigars as well, as it is all about taste. Give 5 different smokers the same cigar, and you might get 5 different sets of tasting notes. it’s all about preference, and there are nearly unlimited options available.

What is the greatest smoking experience you’ve ever had? (cigar, location, atmosphere, occasion, etc)

How about a random one? About a month ago, I was walking down 6th Ave. in NYC, when I was stopped by a police officer. As he asked me about my cigar, I assumed I was going to get harassed for smoking on the sidewalk (which is apparently illegal in NYC now), but instead, the officer told me how much he loved cigars and began to rattle off about a dozen of his favorite brands and sizes. He was such a nice guy that after we chatted, (and I gave him a couple of old CA copies I had in my bag), he popped the trunk on his cruiser, pulled out a small bag of cigars and gave me a Cuban Cohiba #2. It was an interesting NYC experience, and one that I’m sure Mayor Bloomberg, would love to eliminate in the future.

What is it about Cigar Rights of America that you find so compelling that you volunteer your time?

A common misconception regarding the anti-smoking movement is that it is solely geared toward cigarettes. It targets all smoking products including cigars. All 50 states in the US have some form of a smoking ban or a tax on tobacco products. The primary goal of the anti-smoking movement is to eventually outlaw all tobacco products. Cigar Rights of America (CRA) was founded on the principle of fighting for the freedom to enjoy cigars. CRA is a Non-Profit Consumer Grassroots Organization that works with local, state and federal governments to protect the freedoms of cigar enthusiasts.

What do you find the most common reason behind the public’s willingness to support smoking bans and tax increases?

Cigarettes. Our biggest challenge in fighting for our freedom to enjoy premium hand rolled cigars, is separating the public’s perception of tobacco. The premium hand rolled cigar industry consists of centuries old techniques that respect the land, the crop and the tradition of the industry. Big Tobacco is completely the opposite, driven by corporate greed and shareholders. The cigar industry does not intentionally make their products addictive. No additional tar, nicotine, ammonia, etc. is added to premium hand rolled tobacco. To the contrary, many steps in the fermentation/curing process specifically remove impurities from the leaf. On a recent trip to Davidoff’s Camp Camacho in Jamastran, Honduras CA, General Manager Sandra L. Ochoa described that the process is what keeps cigar tobacco from going stale, even though it gets dry. Cigarette tobacco is much more processed and cannot be revived indefinitely, like premium hand rolled cigars.

In recent years there have been quite a few increases in the amount of tobacco taxes and regulations on cigar smokers around the country. What would you say is the primary battle ground for cigar rights advocates? Local, state, or federal?

While the federal anti-tobacco movement is geared at cigarette smoking, the premium hand rolled cigar industry is still unfairly lumped in with all tobacco use. I believe that we can raise awareness about the threat to our freedoms. Unite at your local Premium Cigar Shop, with enough support, we can fight this inclusion with facts and education.

Given CRA’s mission, they are clearly very aware of the proposed invasion of the cigar industry by the FDA. What are the proposed policies, and why are they so dangerous?

Overall, I applaud the FDA for intervening in the free market to prevent underage smokers. The main concern is while the FDA has stated their investigations and focus will remain on the cigarette and not cigar industries, they may choose to do so in the future. The policies aren’t the issue. The issue is that there is no clear definition that separates the premiums hand rolled cigar industry from mass-produced, intentionally-addictive cigarette and chewing tobacco industries. I am behind the Gov’t’s intention to make tobacco use less appealing to underage Americans. I am not happy that I can no longer by D’Jarum Cloves in NYC, but I get it, and am not too upset.

What are the basic principles behind the CRA’s strategy to protect our right to enjoy fine tobacco?

This is a basic “no taxation without representation” issue. If the premium hand rolled cigar manufacturers are to be taxed, they should be taxed at rates in line with non-addictive products. This is an industry, a product of camaraderie and of brotherhood. Our NYS tobacco tax rate of 75% is ridiculous compared to some other states (i.e. Kansas – 10%). The disparity is often tied to the the aggressiveness & tenacity of local officials. NYC Mayor Michael Bloomberg has reportedly contributed $220M of his own to the Anti-Tobacco movement.

The Mayor wants his city to be the nicest in the world.

What can the average cigar smoker in the U.S. do to help keep the culture alive?

1. Join the Cigar Rights of America
2. Contact Your Congressman: This is a support email asking reps to co-sponsor HR1639 and S1461.

What can a new cigar enthusiast do to learn more about the premium hand rolled cigar industry?