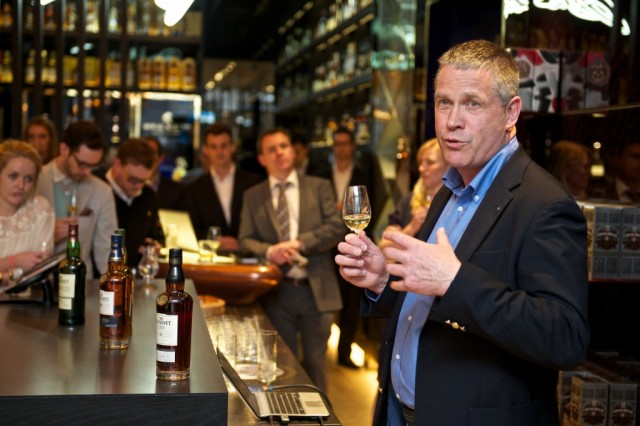 Alan Winchester, Master Distiller of The Glenlivet led the inaugural tasting of a new mystery expression, The Glenlivet Alpha at a media launch event held at the Whisky Shop in Piccadilly on 8th May.

Chivas Brothers CEO, Christian Porta, attended the event to support the launch of the new expression, which is limited to 3350 bottles.

Alan Winchester (pictured above leading the tasting) will reveal the tasting notes and cask information for the mystery expression in a video broadcast on 6th June at 12:30pm. To watch the reveal live, visit The Glenlivet’s Facebook page. 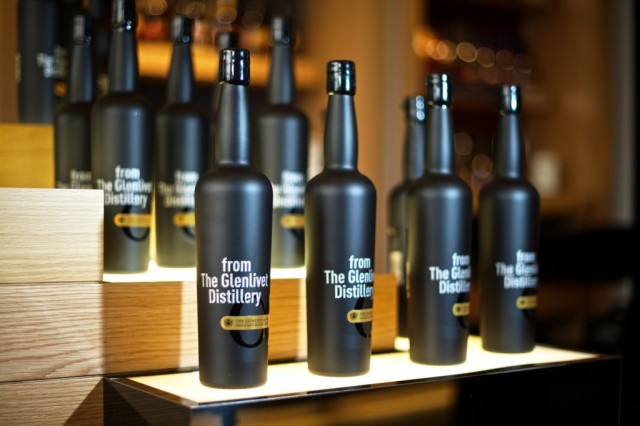 The Glenlivet is the No. 2 single malt Scotch whisky in the world. Crafted in the remote Livet Valley since 1824, it is the only whisky with the unchallengeable right to be called The Glenlivet.

Celebrate The Derby with a Rough Rider Bourbon Mint Julep

The 2013 Championship Blend has been created with a selection of exceptional whiskies, aged for at least 41 years, and is being released to commemorate this year’s tournament which is taking place in Icheon, South Korea from 25 – 28 April 2013.

Just ten individually numbered bottles of this rare limited edition will be produced, with one being gifted to Wiesberger as reigning Ballantine’s Championship winner and collaborator in the creation of this year’s blend.  A bottle will also be reserved for the 2013 champion and another will be auctioned during the tournament for charitable causes.

This exclusive and exceptional blend is presented in a prestigious bottle with a handcrafted and gold finished metal band which bears the individual bottle number alongside the signatures of its two creators, Sandy Hyslop and Bernd Wiesberger. The bottle also features Ballantine’s unique crest carefully etched onto the glass, enhancing the brand’s proud heritage and excellence. The bottle sits in a solid wooden cabinet with a premium leather cover featuring the iconic Ballantine’s ‘B’ and gold coloured metal band. Interior leather panels on each of the cabinet doors, bearing a quote from Hyslop and Wiesberger, and a leather bound booklet complete the luxurious presentation of the 2013 Championship Blend, highlighting Ballantine’s association with golf and the uniqueness of the blend.

Since the inaugural event in 2008, Ballantine’s has established the unique tradition of creating an exclusive Championship Blend each year, created by Master Blender Sandy Hyslop with the reigning Championship winner. Wiesberger becomes only the fourth person in history outside of Ballantine’s expert blending team to be invited to work with a Master Blender in creating a Ballantine’s blend, with previous winners, Lee Westwood, Graeme McDowell MBE and Marcus Fraser having been granted the same privilege over the past five years. This year, Sandy Hyslop personally guided Wiesberger through a tasting of extremely rare and high quality grain and malt whiskies to assess which flavours he preferred before carefully blending the golfer’s selection.

Sandy Hyslop comments: “It was a pleasure to introduce Bernd Wiesberger to the art of blending while creating the 2013 Ballantine’s Championship Blend. We’ve created a truly unique blend that reflects Bernd’s own taste and character but is still true to Ballantine’s signature style – soft, sweet, elegant and balanced. I’m delighted with the results and I believe this Championship Blend is a fitting tribute to the shared flair, craftsmanship and excellence of Ballantine’s and professional golf.”

Bernd Wiesberger added: “It has been a privilege and an honour to join Ballantine’s Master Blender, Sandy Hyslop, in creating this special whisky. It will have a place of honour in my home, sitting alongside the Ballantine’s Championship trophy until an occasion so special that I am willing to drink it.”

Peter Moore, Ballantine’s Global Brand Director, says: “The Ballantine’s Championship Blend is a unique tradition that celebrates the shared values and heritage of Ballantine’s and golf, so we are thrilled to release this year’s unique expression, one of the rarest and most exclusive whiskies ever produced by our Master Blender, Sandy Hyslop. The synergy between Ballantine’s and golf has never been stronger and we are extremely proud to be associated with one of the most prestigious golf events in Asia, where our sponsorship investment, both at the top of the game and at grass roots level, marks our deepening commitment to world-class golf.”

Ballantine’s association with golf can be traced back to 1960 when the first Ballantine’s Tournament took place at Wentworth Golf Course in the UK. Since Ballantine’s became the title sponsor of the Championship in 2008, many professional golfers have demonstrated their world-class talents at the Ballantine’s Championship and the event has fast become one of Asia’s most prestigious golfing events, with over 45,000 spectators in 2012 and coverage broadcast to 300 million homes worldwide.

Ballantine’s is the No 2 ultra-premium Scotch whisky in Asia, No 1 Scotch whisky in Europe and the range sells over 70 million bottles a year worldwide. Ballantine’s has won more than 120 trophies and medals at international competitions in the past 10 years for quality, as a result of its unique richness of character and perfect balance. The range, from Ballantine’s Finest to the exclusive 40 Year Old, is the most extensive in the world of Scotch and is maintained by the latest in a tradition of Master Blenders that dates back to 1827.

This post is for the cigar smoker on a budget. Chances are, if you’re an average cigar smoker, you know what being on a budget is like.  You can’t afford to regularly drop $15 on one cigar. Heck, you can’t even spend $30 on a five-pack. So you’re stuck either smoking infrequently (bad), smoking low-quality cigars regularly (more bad), or bumming cigars off of your friends (double-bad).

The good news is, there are a few places online you can go to find cheap cigars that will blow your socks off. I know many in our audience are big fans of Famous Smoke (my preferred retailer), Cigars International, Thomson Cigars, and other major online retailers, but I’m going to suggest a few, lesser known alternatives that will give you a bigger bang for your buck.

I regularly use these sites to get great deals on cigars:

Cigar Monster was the first website I bought cigars from. It is affiliated with Famous Smoke Shop, another online retailer that I particularly enjoy using because of their pricing and selection. But back to cigar monster.

If you’ve ever used other “deal a day” or “deal every hour” websites like Woot.com, they are what they sound like. Every hour, Cigar Monster offers a hot deal, typically on five packs and samplers.  Unlike other websites, however, their five-pack deals often include free shipping. From this I’ve gotten five packs of Rocky Patel 1990, Oliva G Maduro, Cain, My Father, and other brands for $15-$20 including shipping.  A price point like this allows someone on basically any budget to enjoy great cigars for $4-$5 a stick.

The real kicker is, every Friday, and often other days, the site lists all of the weeks previous deals in a “Mega Monster Mashup.” This adds a great selection to the already heavenly (hellish?) price point you’re getting.

Cigarbid.com is, for me, heaven. Think of it like ebay, but for cigars. There are plenty of online auction websites, and even other cigar auction websites, but none of them do the job like cigarbid.com. On cigarbid, I routinely find boxes of great cigars for $40-$50. That’s about $2 per stick.

Of course, cigarbid has all of the major brands like Rocky Patel, Alec Bradley, My Father, Nestor Miranda, etc, etc. But cigarbid also has a range of lesser known brands that blow my socks off. One of my regular searches is for the Nica Libre 1990, commonly viewed as a knockoff of the Padron Anniversario 1926. The amazing thing is, the Nica Libre 1994 is a kick ass representation of the taste (you can read a side-by-side review here).

Bottom line: I use cigarbid to buy boxes of quality cigars, mainly so that I always have something good on hand to give to friends when they come over, and something enjoyable for me to smoke. But I would caution you: it is very easy to get carried away on sites like cigarbid, so be sure to log on knowing how much you want to spend, and stick to that limit.

The only drawback to websites like Cigar Bid and Cigar Monster is selection–the only items you’ll find are the ones that are on sale. So it’s worth taking a look at Famous Smoke Shop because they have a tremendous selection of classic cigar brands like Montecristo, Romeo y Julieta, etc, but also boutique brands as well.

Check out our newest look at the best online cigar retailers here. Also, if you’re looking to purchase cigars for corporate events, check out our article on that here.

This cigar from L’Atelier Imports is collaboration between Pete Johnson, his brother K.C., Sean Casper Johnson, and Dan Welsh of New Havana Cigars. The sizes are an homage to Cuban Cohiba Behikes. The cigar is made by Pepin Garcia in the My Father factory in Nicaragua.  The filler blend is of Nicaraguan tobaccos while the wrapper is an Ecuadorian wrapper called “Sancti Spiritus”. This is a hybrid of  Criollo and Pelo de Oro. I’ve enjoyed Behikes in every size even the 56 which is not normally my preference so let’s see what this Cuban tribute has to offer:

The cigar sports a high glossy band which immediately attracts the eye. The wrapper has a rich brown hue with an oiliness and veins present. There were no soft spots on this cigar and it was rolled extremely well.  The triple cap along with the pigtail at the end demonstrates the craftsmenship taken in rolling this smoke.

Intial lighting of this cigar gave off tea and sweet fruit notes. Bits of spice where had on the retrohale however the lingering finish was that of sweetness.  The body built up to a medium profile at this point and coated the palate with creamy smoke. I initially thought I would get a classic blast of “Pepin spice” however I was pleasantly surprised with the refinement I was treated to. Midway the LAT 54 developed a creaminess and wood profile that finished with that fruit sweetness again.  The wood/cedar profile picked up with spice developing in the background. The last third of this cigar gave a more earthy character and chewy texture to it.  I was loving the changes in flavor and the tobacco quality was excellent. The finish provided flavors of oolong tea, earth, and cedar. The cigar burned a nice dark gray ash throughout and smoked effortlessly.

Having smoked the entire line of LAT’s I have to say this is my favorite vitola. The flavors presented were refined and harmonious throughout the entire cigar. The LAT 54 smokes medium to full bodied and packs wonderful sweet, wood and earthy flavors. The progression of this cigar left me wanting more and I would love to see where the flavors go with some age. Although a lot of Pepin’s cigars smoke well initially and then tend to fade in flavor, I think this one has potential to develop further if not remain just as good in the future. L’Atelier has shown me something with this Behike tribute. I wouldn’t say it is anything like a Behike nor was it the intention of the maker however for the price and flavors you need to pick a box of these up.