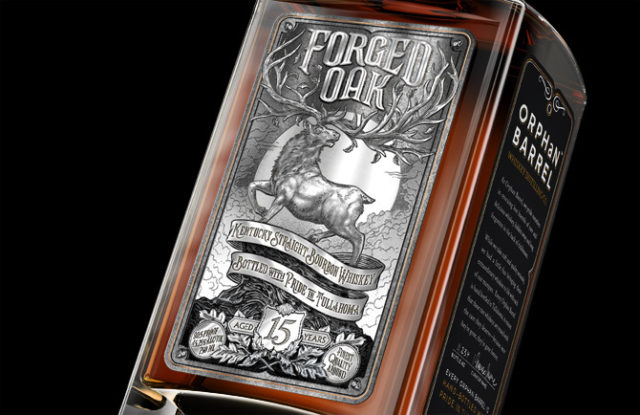 I will admit to you all, I am a tad partial to Orphan Barrel products. It was in the basement-level bar of a local brewery in a dark and crowded space that I tasted Orphan Barrel Barterhouse. This was my first taste of a “higher-end” (for me at the time anyways) bourbon. It was with the first successful hunt for a bottle with a close friend of mine that my love for bourbon really kicked-off. As such, I have successfully completed my mission to taste each of these Orphan Barrel products. So, without further delay, my review of Forged Oak for your entertainment.

True to the name, you immediately get a strong oaken scent. So strong in fact, you have to search for others. If you do though, you’ll find vanilla bean, caramel, and molasses intertwined.

The sip starts with a spicy kick of charred oak, dried berries, and fades into dried vanilla bean and maple. It’s a rather straightforward flavor that wood-punches your taste-buds.

Again, a rather straightforward flavor of orange-blossom honey plays on the tongue while a very slight woody burn sits in the back of the throat.

If you like woody bourbons, this one is one for your cabinet. It isn’t the easiest to find, but worth a pick-up if you’re into that sort of thing. I will admit the price is a tad high for such an on-the-nose bourbon when it comes to flavor, but with a name like “forged oak” you more or less know what you’re getting yourself into when you swipe your credit card. 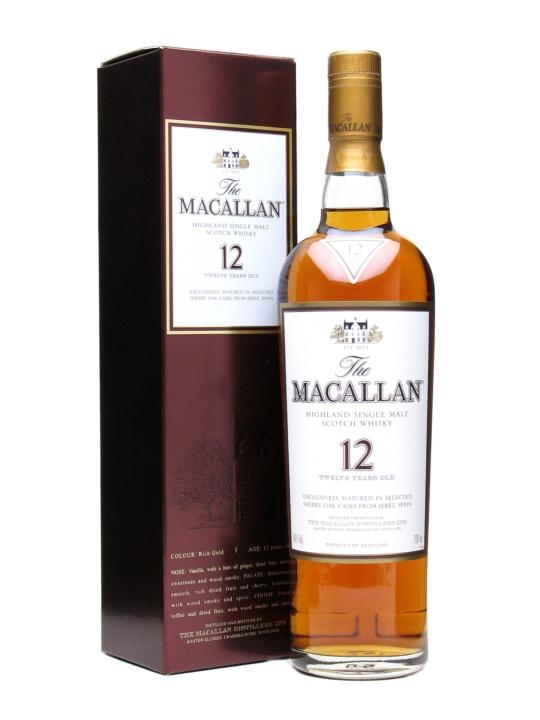 So, my usual bourbon aficionados and I were checking out at our usual store in Tampa when we spotted this prominently placed on a display. The red box immediately caught our eye, and we’ve had some good experiences with sherry cask finishes, so, we picked it up and enjoyed it so much we thought it deserved its own review.

A strong peat, charcoal, and sweet sherry scent immediately overtake the nose, followed by a light aroma of orange peel and floral-honey.

The sherry immediately hits you full-force and recedes into the typical Macallan single malt flavors of oaky-peat and smoky-charcoal. Undertones of citrus and dried cherries make a pleasant appearance, peaking at the middle of the taste.

For having such a bold flavor, the afterglow is surprisingly light. Honey and floral flavors stay on the tongue with slight tones of sherry and charcoal in the background.

Overall, it was a rather enjoyable pour. The depth of flavor and complexity added by the sherry oak cask finish is a wonderful addition to an already established selection. There is a very slight bite that comes a second or two after it hits the tongue, but it fades quickly and with it comes that beautiful complexity of competing flavors.

A while back I was fortunate enough to score a bottle of Dave Phinney’s “Slaughterhouse” Whiskey. Dave Phinney as you may or may not know is the famed vintner who created “The Prisoner” an Über California wine blend.  He then sold the company and now makes acclaimed wines from virtually all the major wine producing countries in the world under his Orin Swift label.  Last year he decided to turn his taste for wine into sourced whiskeys. Straight Edge was Dave’s first leap into the whiskey world and his skill in crafting wine doesn’t miss a beat when putting together these whiskeys. Straight Edge is hard to come by and I was lucky to grab a bottle for this review.

Straight Edge much like all of Phinney’s creations catches the eye with creative labeling. Straight Edge as the name implies sports an old style straight edge razor. The red background in the lettering matches the color of the whiskey itself.  In the bottle the whiskey has an attractive almost sherry color to it. Straight Edge is a blend of 5, 7 and 8 year old Bourbon from Kentucky and Tennessee.  It’s finished at Phinney’s facility in Napa Valley using Mercury Head Cabernet Sauvignon barrels. Mercury Head is Orin Swift’s high end expensive Cabernet. I have a bottle of the ’01 Mercury Head and you can see in the picture below the Whiskey and the wine it was barrel finished in.

Here is my review:

Palate: Upfront lots of vanilla, butterscotch and toasty oak. Midway spice with orange and honey that coats the mouth.

Finish: Real toasty on the finish with vanilla, caramel and a wonderful touch of rye that rounds out the profile.

Conclusion: An extremely well balanced whiskey. While I don’t feel the body was as “weighty” as the Slaughterhouse this whiskey was more nuanced in it’s primary flavors. I attribute this to the aging in Cabernet barrels rather than Bordeaux barrels with Slaughterhouse.  Orin Swift Cellars has diversified their profile with both American Whiskeys. Straight Edge delivers sharp  flavors of vanilla, oak and spice which is what a quality American Whiskey is all about. If you can find a bottle I would grab it as I wish I had more myself. Below is a link to my review of Slaughterhouse if you’d like to compared the two. Enjoy! 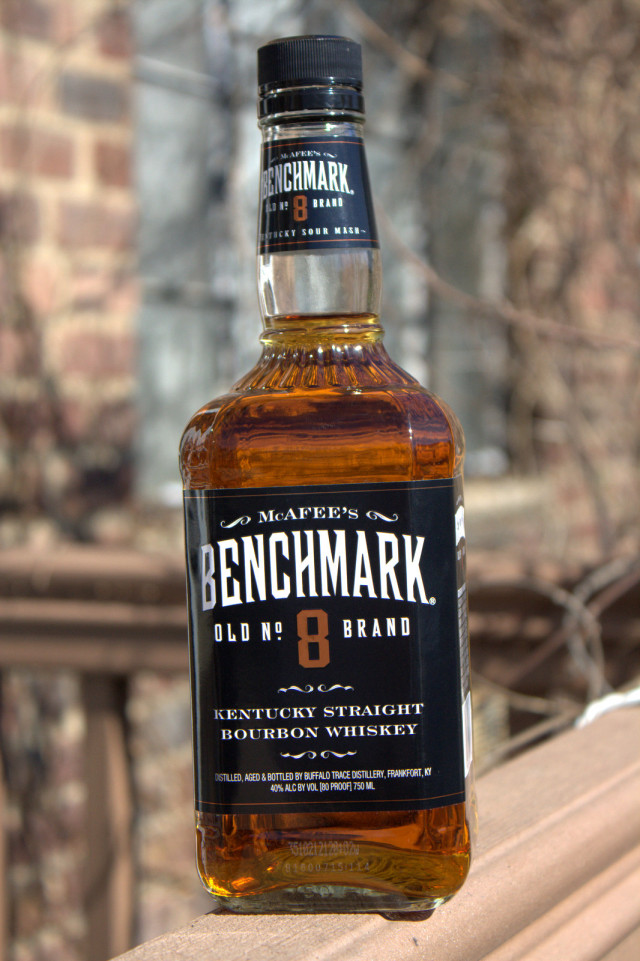 Like many whiskey enthusiasts, I am always in search for the perfect value bourbon.  My standby, for years now, has been Evan Williams 1783 — and it still is. But last week I dropped by Astor Wines on 4th st and happened upon McAfee’s Old No. 8. For $9, it’s about $11 below what I’m used to paying for 1783, so I figured I’d give it a try. 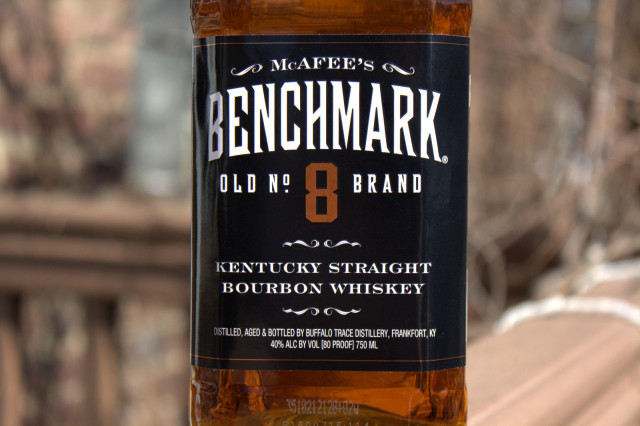 This is where this $9 whiskey is really special. Here’s why: a decent medium bodied texture, remarkably low ethanol burn, and some decent, if mild flavors. Caramel, breadiness, some rye spiciness, and mild fruitiness. The most notable quality about this whiskey is what it lacks: harshness and unenjoyable flavors.

Fairly short finish here. Some vanilla and light spices. Not much to report.

This is easily one of the best $9 whiskies I’ve ever had. What I love about how this whiskey is put together is how it doesn’t make the mistake that so many others make of getting ambitious and trying to introduce too many flavors without the maturation to back it up.  This is not the most interesting whiskey in the world. But for $9, this is a pretty great deal and deserves a shot and for me, a spot on my (admittedly bloated) liquor shelf.